The US ULCC Frontier Airlines has held a more positive view than most operators – that it could bounce back from the COVID-19 crisis in a reasonable period of time. As larger US airlines continue to warn that they will significantly shrink their operations, Frontier has made no such declarations.

In fact, the airline is adding 18 routes to its network for the US peak travel period, citing a strong uptick in summer travel demand. Obviously that remains off a low base, and even as most US airlines have concluded that demand bottomed out in Apr-2020, the rebound for the summer off that bottom of demand still does not change the general consensus that a recovery to 2019 levels will take at least three years.

Frontier's additions are mostly to Florida sun markets on routes where larger airlines have either cut service completely, or have significantly decreased their presence.

Perhaps Frontier sees an opportunity to attempt to entice restless customers with low fares. But competitors also seem to be adding back some flights on those routes, which could create an interesting pricing environment.

An uptick in US summer demand is encouraging, but a full recovery is years off

Frontier has been one of the more upbeat airlines in the US as it has worked to navigate the sudden fallout from the COVID-19 pandemic.

Frontier's executives have previously told The Denver Post that the airline had been transporting 80,000 passengers per day, on average, before that figure fell to 3,000 during the crisis, but more recently the airline's passenger levels have grown to 10,000 daily.

See related report: COVID 19: Frontier Airlines has a more bullish view than most

The airline’s executives also told the publication that Frontier was aiming to have all of its fleet operational again by Jul-2020. CAPA’s fleet database shows that as of late May-2020, Frontier had 52 aircraft in service and 46 inactive.

Frontier Airlines fleet summary, as of late May-2020

Frontier is joining other airlines in citing some increasing demand for the US summer high season. Those include the ULCC Spirit Airlines, which expects somewhat of a rebound in demand, albeit from a very low base.

The low cost value airline JetBlue has determined that demand in its network bottomed out in Apr-2020, and it is starting to experience some small improvements in bookings.

The US big three global airlines, American, Delta and United, have also cited some improving trends, and throughput in security checks at the country’s Transportation Security Administration (TSA) have been gradually improving. 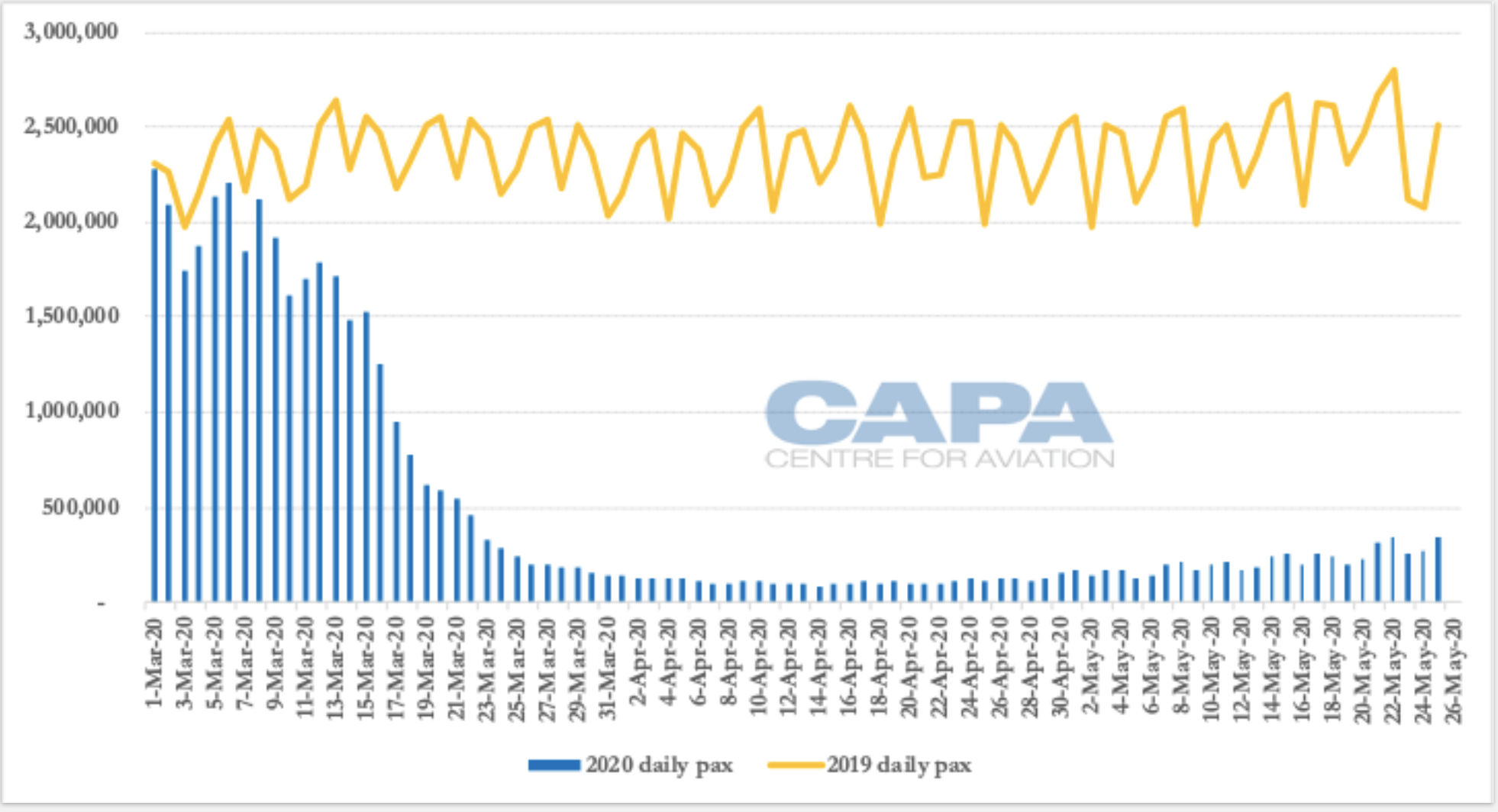 Those anecdotes are welcome as the industry continues to reel from the effects of the COVID-19; however, it does not signal a full recovery.

Although daily reported cases have fallen from their peaks, the country has reported more than 102,000 deaths from COVID-19, and the death toll continues to climb.

Frontier is adding beach destinations to entice US residents to travel...

But after more than two months of quarantine in some states, a significant proportion of the US population wants a change of scenery, and Frontier appears to believe that it can tap into that desire with low fares and entice the populace to travel.

The airline is adding 18 routes beginning in late Jun-2020 through mid Jul-2020, which is during the US busy travel season.

Additionally, Frontier is launching flights from Chicago O’Hare to Pensacola, Los Angeles to Orlando Newark, and Philadelphia to Myrtle Beach, as well as between Dallas/Fort Worth and Miami.

On all of those pairings US full service and other low cost operators have either pulled service as result of COVID-19 or have drastically cut back their flights.

...but Frontier's competitors appear to be adding some flights to those same cities

Los Angeles to Orlando International is particularly interesting: American, Delta, JetBlue and United all operated service on the route before the pandemic but have cut flights. Yet according to CAPA and OAG, those airlines appear to be adding back some services on the route in the summer period.

Of course, schedules are currently highly fluid, and it is yet to become clearer how much capacity will actually return to the US system in the summer high season.

But Frontier is targeting demand largely from the US Northeast and Midwest to Florida. Previously, JetBlue has noted a slight pickup in load factors, largely in its Florida and Northeast markets.

Data from CAPA and OAG show that JetBlue is still operating service between Boston and Fort Myers, although its seats year-on-year for the week of 25-Apr-2020 had been reduced by 66%. The airline’s seats between Boston and Tampa for that period dropped 79% versus the year prior, in 2019.

The data also show that JetBlue plans to add back service from Newark to Fort Myers and Palm Beach in the high season; United and Spirit will also serve Fort Myers, and United will also operate service to Palm Beach.

All of Frontier’s planned new routes fall into its typical service pattern of less than daily, but it is likely that its competitors have no plans to return to their pre COVID-19 schedules for those markets, which begs the question of how prices will evolve in those markets.

Most airlines are still anticipating 2Q2020 revenues falling at least 70% or more as they try to minimise cash burn and get load factors to break even. Those inputs could make for an interesting pricing environment for the US summer season.

Frontier aims to exploit opportunities in the crisis. Will it succeed?

Frontier is putting the conclusion that demand is picking up for the US summer season to the test. The airline is targeting some busy leisure destinations from legacy airline hubs – Chicago O’Hare (hubs for American and United), and Newark (a hub for United). Boston is a focus city for JetBlue and was a coastal hub for Delta before the pandemic.

The competitive response in the current environment will be interesting to watch, as most of Frontier’s rivals tend to have a less bullish view than the ULCC has – which appears to be to capitalise on what it judges as opportunities within the crisis in the market.