US airlines believe there are glimmers of hope during the busy summer travel season as some pent-up demand has materialised, but the encouraging signs should not be interpreted as there being a full recovery under way.

Despite some positive trends, the 2Q2020 revenue of most US airlines is projected to fall precipitously year-on-year, and will remain pressured as they continue injecting low fares into the market to stimulate demand.

There is little visibility into demand beyond Jul-2020, and the country’s airlines are continuing their work to stave off cash burn and to build up liquidity. United has become the first US airline to use its loyalty programme to secure a loan, but American seems likely to follow as it works to secure a loan from the US government.

Daily passenger screenings by the US Transportation Security Administration (TSA) have emerged as one of the more immediate indicators of demand as the US has worked to combat the COVID-19 pandemic.

Passenger throughput at airports hit a bottom on 14-Apr-2020 at 87,534 passengers, compared with 2.2 million the year prior. 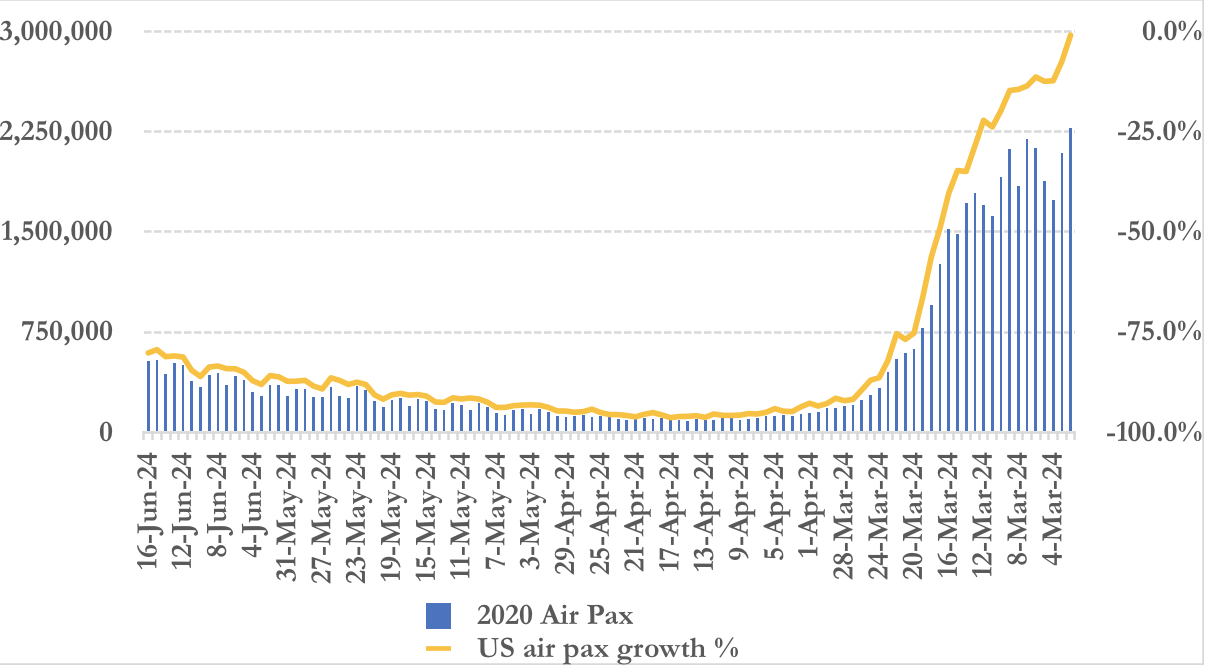 Source: CAPA - Centre for Aviation and the US Transportation Security Administration.

The country’s airlines are experiencing some uptick in demand for Jul-2020 as 'stay at home' orders in the US are lifted and pent-up demand, in some cases, is translating into an increase in passengers. As a result, airlines are increasing their capacity for Jul-2020 compared with Jun-2020.

Southwest Airlines, which has not been as aggressive in cutting capacity, is planning to operate at least 60% of its Jul-2019 schedule in Jul-2020, and American Airlines aims to operate 55% of the domestic schedule it operated in Jul-2019.

United plans to operate 30% of its domestic schedule from a year ago, and Delta is aiming to operate 35% of its schedule in Jul-2020 compared to the year prior. Recently, Delta has stated that it is adding 1,000 flights system-wide in Jul-2020.

Data from CAPA and OAG show that for the week of 15-Jun-2020, Southwest was operating approximately 33% of US domestic seats, followed by American at 22%.

US airlines ranked by domestic seat deployment, as of 15-Jun-2020

But for the week of 13-Jul-2020, Southwest and American are each forecast to account for approximately 25% of the country’s domestic seats.

Before the pandemic, American had the largest domestic footprint of the three large US global network carriers, and the airline appears to be leveraging that position to take advantage of the slight increases in demand.

US airlines ranked by domestic seat deployment, as of 13-Jul-2020

There has also been some positive movement in bookings among US airlines.

Delta Air Lines has also recently cited an improvement in net sales and in the stabilisation of cancellations; however, it expects its 2Q2020 revenue to fall by 90%. American is forecasting a similar drop in revenue for the quarter. United is projecting a 90% drop in its ticketed passenger revenue in Jun-2020 and a decrease of 82% to 88% in Jul-2020.

Load factors for US operators are also increasing, albeit from historical lows.

United posted a 13% load factor in Apr-2020, but projects an increase to 50% in Jun-2020 and 55% for Jul-2020. American’s domestic load factor was 16% in Apr-2020, but should jump to 62% in Jul-2020, according to a company forecast. Those increases do point to some uptick in demand, but also reflect airlines are trading yields for loads to stimulate demand in the marketplace.

US airlines continue to play the long game in recovering from COVID-19, and are continuing to build up cash reserves to keep decreasing their cash burn.

United recently raised USD5 billion secured by its MileagePlus loyalty programme. Although JetBlue has sold forward miles to raise liquidity, United is the first to use its frequent flyer scheme as collateral.

It is not surprising that United opted to use MileagePlus to build up its cash reserves: the company stated that multiplying its MileagePlus holdings' 2019 EBITDA by a factor of 12 equates to a programme value of approximately USD21.9 billion. This may be optimistic in today's world, but it is undoubtedly a valuable asset.

Airlines are not leaving any stone unturned as they evaluate their assets to build up liquidity or pay off debt coming due in the short term.

Analysts at Cowen & Co expect United to use a portion of the debt backed by the loyalty programme to be used to pay down more expensive short term debt, approximately USD2.75 billion due in Mar-2021 and Apr-2021.

If United opts to secure a USD4.5 billion loan made available from the US government through the Coronavirus Aid, Relief, and Economic Security Act (CARES) Act, it could have USD17 billion in liquidity at the end of 3Q2020. The CARES act loan would be secured by slots, gates and routes.

American has applied for a USD4.75 billion loan available through the CARES Act. “It is the company’s intent to pledge its domestic AAdvantage program assets as security for the loan”, American stated in a recent company update. The company remarked that the most recent third party appraisal for the American Airlines loyalty program had estimated its value at between USD19.5 billion and USD31.5 billion, “a significant portion of which will be pledged as collateral to support the CARES Act loan”, American stated.

Although US airlines have worked feverishly to reduce their cash burn, the country’s largest operators are still burning through millions on a daily basis. At one point, American’s daily cash burn was USD100 million, but has been reduced to USD40 million for Jun-2020. The airline is pledging to reduce its cash burn rate to zero by the end of 2020.

Previously, American calculated that its daily cash burn would drop from USD70 million per day in 1Q2020 to USD50 million in Jun-2020.

United is also projecting a daily cash burn rate of approximately USD40 million for 2Q2020, and has stated that it expect a decrease to USD30 million per day during 3Q2020.

Delta Air Lines was also burning through USD100 million per day at the beginning of the pandemic, but is forecasting a drop to USD30 million sometime in Jun-2020. The airline also believes it will reach zero daily cash burn by YE2020.

The progress in daily cash burn is crucial, but while millions are still being burned daily, all assets are up for grabs as airlines work to build a war chest of cash.

The general consensus in the US is that demand bottomed out in Apr-2020 and has been moving upward since that time.

However, demand remains severely depressed, and as yet there is no clarity on how it will take shape once the summer travel season is over.

And even with an uptick in demand over the summer, a recovery in revenue remains far off, which means most US airlines will continue to build their cash reserves, even if it means increasing the leverage they have worked hard to decrease during the past decade. It obviously does not help that COVID-19 clearly has some time to run, as numbers of cases continue to rise.