As demand for air travel disappears in the wake of the COVID-19 pandemic, passenger airlines operating around the world are turning to cargo in order to produce fractional revenue.

In the US, major passenger airlines – after turning their attention away from freight during the past year in order to push up revenues from credit card deals, frequent flyer miles and other general ancillary sales – are opting to operate cargo flights. North America’s cargo traffic declined by 3.4% in 2019, and cargo revenues for the largest US airlines fell solidly year-on-year.

Obviously, cargo is not a long term saviour for the airlines, as they continue to navigate fast-moving changes brought on by the COVID-19 outbreak, but operators are turning over every rock in order to recapture even a fraction of their lost revenue.

Cargo slid back for major US airlines in 2019, after a solid performance in years prior

The major US airlines all posted declines in their cargo revenues during 2019, with American posting the largest decline – nearly 15%.

Their cargo revenues as a percentage of total revenues were small, and their cargo capacity slid year-on-year.

Source: CAPA - Centre for Aviation and OAG and company reports.

The region accounted for 24% of the world cargo market in 2019. (Note: FedEx and UPS are excluded from the data listed below) 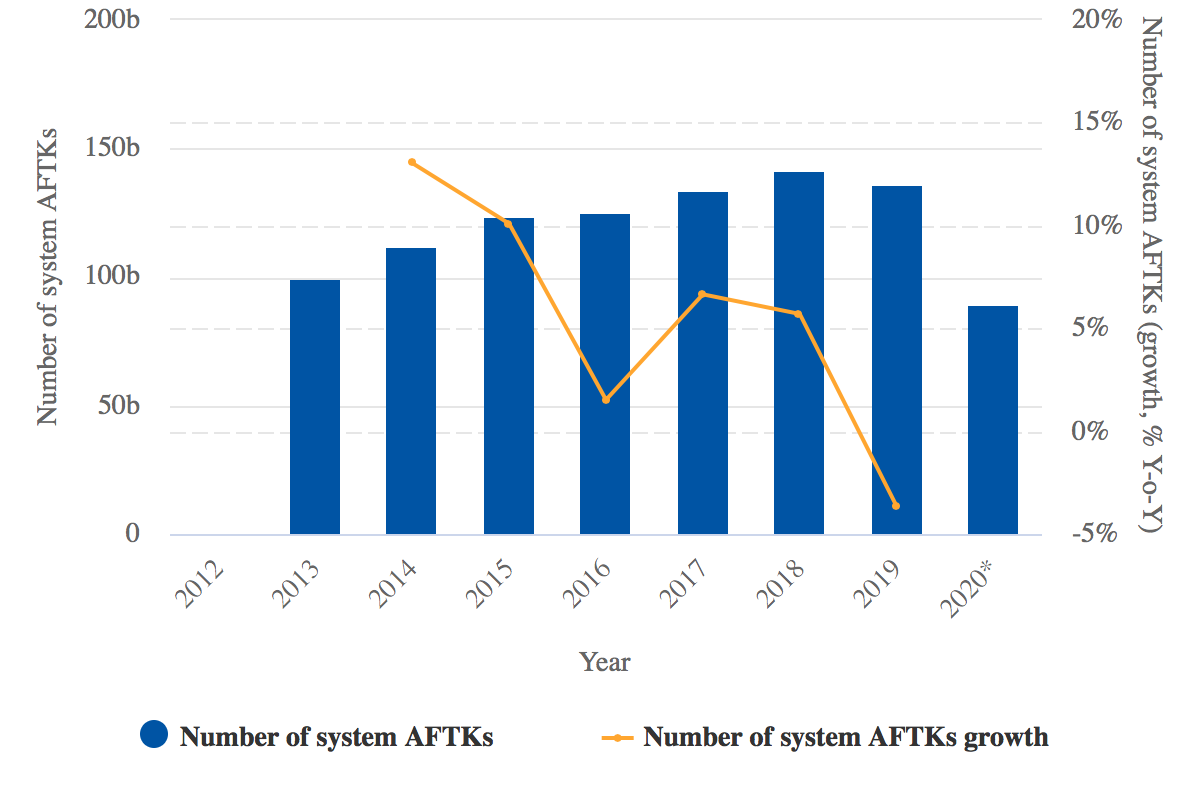 * The values for this year are at least partly predictive up to 6 months from 30-Mar-2020 and may be subject to change.

In mid 2018 members of American Airline’s management team stated that the company had experienced positive trends in its cargo business since 2H2016, and for that year its AFTKs jumped by 28%.

American posted a 13.8% jump in its cargo revenues, to USD1 billion, which was the first time that the company’s cargo revenue had reached the one billion dollar mark in its history.

Cargo is also an element of the joint ventures that Delta Air Lines has with its SkyTeam partners Aeromexico and Korean Air.

The year 2018 marked the first time that Southwest Airlines launched international cargo operations: from Houston Hobby to Mexico City and other Mexican destinations. Southwest later discontinued service to Mexico City, and in 2019 cargo revenues represented less than 1% of its total revenues.

US airlines pursued opportunities to shore up other revenues in 2019

The decline in North American cargo revenue in 2019 was driven by trade tensions and slower economic activity, according to IATA.

In Dec-2019 FTKs in North American dropped by 5.6% year-on-year, which the association stated was the weakest monthly growth for the region since early 2016.

As market conditions became more challenging for cargo in 2019, the large US airlines continued to build up their “other revenues”, which include frequent flyer miles, credit card deals and other ancillary revenues.

Performance of selected US airlines: 'other' revenue in 2019

In the span of broadly a month, COVID-19 has devastated the global airline industry; demand has all but dried up, and a full recovery in traffic could take at least two years.

Southwest Airlines’ executives have stated that its load factors are unsustainable, and Delta has stated that it is losing USD60 million per day (according to Business Insider). Earlier in Mar-2020, United’s executives remarked that load factors were in a range of 20% to 30%; more recently the airline’s loads have fallen into the teens or single digits.

It is hardly surprising that those airlines have opted to exploit opportunities in cargo born out of the effect of COVID-19 on aviation.

Delta is operating thrice weekly cargo flights between Detroit and Shanghai with Airbus A350s. The airline is transporting surgical masks, gloves, gowns and other protective equipment.

American Airlines is operating cargo-only services between its hub at Dallas/Fort Worth and Frankfurt.

United has been operating 40 chartered cargo-only flights to and from its hubs, using Boeing 777s and 787s. United stated that on its first freight-only flight between Chicago O’Hare and Frankfurt the aircraft’s cargo hold was completely full, with more than 29,000lbs (13.15 metric tonnes) of goods.

Southwest is also launching chartered, cargo-only flights with it 737 narrowbodies to transport medical supplies and other commodities.

Although those airlines are working to send a message of goodwill from the cargo flights by transporting necessary medical equipment, the pandemic has created an opportunity for those airlines to garner a fraction of their missing revenue from their cargo operations.

Citing the TAC Index, Air Cargo News has reported that rates between Frankfurt and North America have increased 40.3% for the week of 30-Mar-2020, to USD4.18 per kg. Between Chicago and Europe the increase was 13.1%, to USD2.33 per kg.

There are some drawbacks to operating cargo-only flights, because freight service is largely one-directional, which means that airlines are operating empty aircraft on one leg of the trip.

But there other variables to consider, including lower fuel prices and simpler crew and scheduling commitments that need to be met.

It is not possible to foretell how long cargo demand will outstrip supply in a COVID-19 environment. 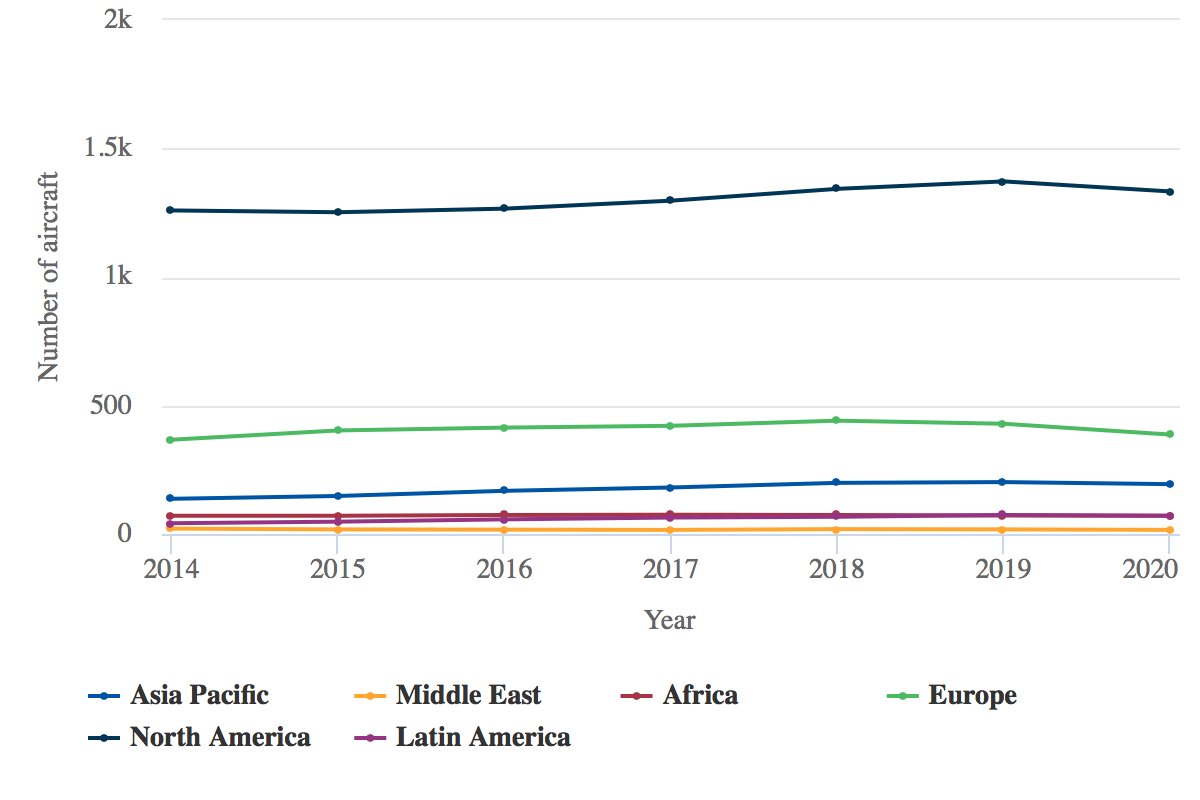 There is also little doubt that all cargo operators are upping their offer to capitalise on the increase in demand for freight transport.

At this point, any source of revenue for passenger airlines is welcome: Delta Air Lines has projected losing USD2 billion in Mar-2020 alone. However, airlines are well aware that cargo operations offer only a fraction of relief.

The latest analysis from IATA shows that global airlines' industry revenue will fall by 68% year-on-year in 2Q2020, which is less than the forecast 71% drop in traffic. Cargo is making up some of the difference, but it will not make much of a dent in the massive decline in passenger revenue that airlines are facing.

Cargo helps, but the degradation in revenue remains at unprecedented levels

As airlines around the world pull their schedules down completely or operate on skeleton operations, it is logical for airlines to tap an immediate opportunity for their grounded aircraft.

But the duration of that opportunity is tough to determine, and although airlines are thankful for a quick, go-to revenue source, the reality is that their cargo operations will only put a small dent in the sharp decline in revenue, which shows no signs of abating.