Copa expects no slowdown in expansion or profitability

Copa remains confident it can continue to post industry-leading profit margins and expand rapidly despite the rise in fuel prices. The Panama-based airline group has reported 1Q2011 net income of USD94 million and operating income of USD101 million, representing improvements of 123% and 29% compared with 1Q2010. The group’s operating margin for 1Q2011 reached 23.9%, which once again puts Copa at the top of the entire global airline industry, as yield improvements offset increases in fuel costs.

Unlike other carriers in the Americas, Copa is not slowing down capacity growth in response to the recent rise of oil prices. Copa still expects year-over-year capacity growth (ASKs) of 20% for 2011. For 1Q2011, capacity was up 25% but revenues were also up 25% to USD423 million.

In fact, Copa has further accelerated capacity growth for 2012 and 2013 by committing to four additional aircraft. The airline group reveals that in 1Q2011 it signed agreements to lease four new B737-800s, one of which will be delivered in 2H2012 and the other three in 2013.

“We feel the moment is right to step up our growth plan,” Copa CEO Pedro Heilbron told analysts during a conference call to discuss 1Q2011 earnings. He points to strong GDP growth throughout Latin America, which is expected to be roughly 5% this year. Economic growth is even higher in Panama, which has emerged as a regional centre for banking and other industries, driven in part by the Panama Canal expansion project.

Copa and Copa Colombia current fleet in service and on order 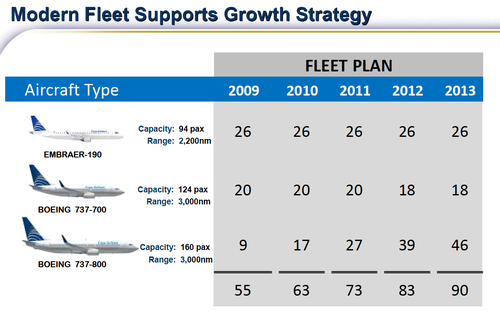 With the recently delivered batch of new B737-800s, Copa is increasing frequencies to several existing destinations and launching four new routes from its Panama City hub – Nassau in the Bahamas, Toronto in Canada and Brasilia and Porto Alegre in Brazil (which will give Copa six destinations in Brazil). The new flights are being added in June-2011 to coincide with the addition of two new banks at Copa’s hub at Panama City Tocumen Airport. Copa says the new banks, which will give it a total of six, will result in more and better timed connections throughout the Americas.

Tocumen is also less congested than most other major airports in Latin America. The airport is now in the final stages of an expansion project which will add 12 jet bridges for a total of 34. Tocumen already has more jet bridges than competing Latin American hubs.

Copa was originally expecting to gain access to the 12 additional gates in May-2011, ahead of the launch of the two new banks. But Heilbron now says the expansion project will not be completed until 4Q2011. However, Copa has the space to add the banks without the additional gates.

Heilbron reports that demand in Panama and across the region remains very healthy. In 1Q2011 yields were up 4% despite an 8% increase in average length of haul.  Copa is now projecting a 13% increase in RASM for the full year. Higher fuel surcharges will drive some of the RASM increase but base fares are also up. Heilbron says “demand looks very strong across the board” and there currently is a “healthy revenue environment”.

Copa CFO Victor Vial reiterated that there is “strong demand throughout the region” and “great momentum” on the demand side. As a result he says Copa is not having any trouble offsetting the recent increase in fuel costs. Unit costs excluding fuel, which were down 10% in 1Q2011, are also expected to continue tracking lower for the remainder of the year.

Excluding special items net income for 1Q2011 was USD82 million, a 31% increase over 1Q2010. This marks the first time Copa has reported its profits based on IFRS standards. It previously reported based on GAAP standards and decided to shift to IFRS in part because all its peers already report in IFRS, making comparisons easier. As a result of the accounting change Copa is restating its 2009 and 2010 results.

The restated results show an even higher net profit and net profit margin, due primarily to changes in the way maintenance is accounted for. For 2010, Copa is now showing a 16.2% net margin based on IFRS compared to the original 15% net margin reported based on GAAP. Operating income and net margins are not impacted by the change. 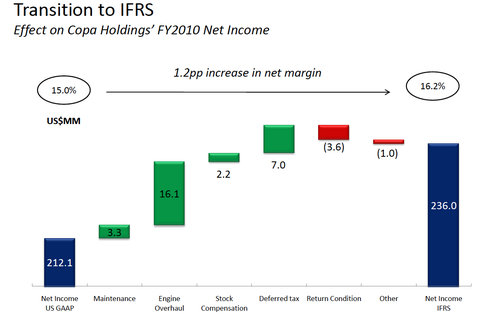