Continental Airlines yield contractions continue in Oct-2009, but on the improve

For Oct-2009, the Houston-based carrier estimates that consolidated passenger revenue per available seat mile (RASM) was down by 14.0% to 15.0%  (mainline RASM down by 15-16%). This represents the smallest monthly contraction for the carrier in six months, since Apr-2009’s 13.1% decline (which was positively impacted by Easter falling in April this year, compared to March in 2008). 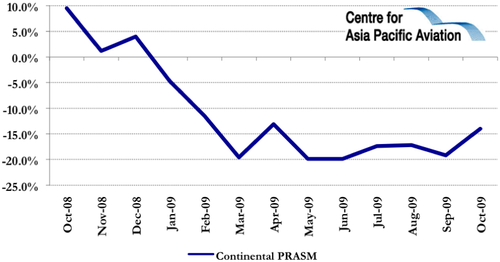 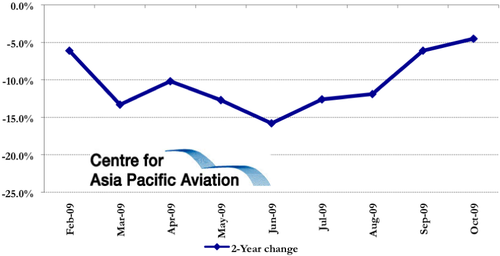 In other traffic developments in the month, Continental Airlines reported a consolidated (mainline plus regional) load factor of 82.5%, a 3.5 ppt load factor improvement, with a mainline load factor of 83.0%, also up 3.5 ppts.

The load factor improvement occurred as Continental decreased consolidated capacity (ASMs) by 2.6% in the month, while traffic (RPMs) was up by 1.7% (mainline capacity was down 2.4% with traffic up by 1.9%).

During the month, Continental Airlines CEO, Larry Kellner, stated he remains concerned the economy “could go deeper” into a downturn, adding that he “wouldn't claim we're seeing recovery”, and the economy is “kind of bumping along the bottom”.

Looking forward, Continental has stated that it expects 2009 load factors to average 81% (82% for Mainline operations), on a 5.2% capacity (ASMS) reduction.  While no RASM figures were disclosed, contractions are expected to continue, as the US enters the weak Winter season and price discounting continues in the US market.