Comair (-6.9%) shares slumped on Tuesday (06-Apr-2010) after news the South African Competition Commission confirmed it conducted raids on the offices of South African Airways (SAA) and its LCC subsidiary, Mango, on 31-Mar-2010, as part of its investigation into airline collusion during the travel period around the FIFA World Cup.

Also raided were the offices of the Airlines Association of South Africa (AASA). The Commission stated it suspects SAA and Mango of withholding information that may have a bearing on the investigation. SAA and partners, SA Airlink and SA Express, had earlier denied any price collusion with other carriers during the World Cup period. Comair is also under investigation, as is 1time (+0.9%).

Elsewhere in Africa, Kenya Airways (+1.7%) rose, moving against Kenya’s All-Share Index (-0.2%), which declined for its second day in three. Lonrho was flat.

In the Middle East, Kuwait National Airways (-1.9%) led the rest of the carriers lower, despite the Kuwait Stock Exchange rising for a second consecutive day. Royal Jordanian (-1.9%) and Air Arabia (-1.1%) fell. 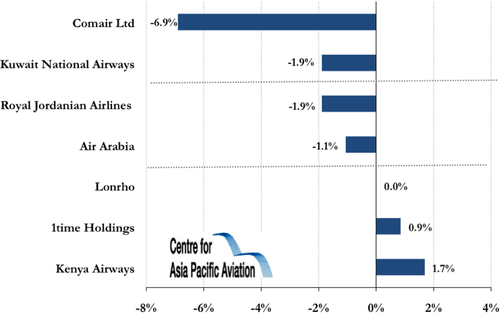