Comair was flat for Wednesday (15-Sep-2010), During trading, the carrier stated it hopes its fleet of new-generation B737-800 aircraft will provide the carrier with the platform for a high-efficiency business model similar to that of Ryanair. A major part of its strategy is the use of lower-cost secondary airports such as Lanseria of which approximately half of Kulula's operations are based. CEO, Gidon Novick stated "we think we will see a great improvement in airline revenue in the year ahead”.

The day prior, the carrier reported a 95.7% year-on-year improvement in net profit, to USD15.1 million.

All other African carriers were also flat for the day, except for Air Mauritius (+0.8%).

In the Middle East, Royal Jordanian (+1.3%) was the biggest gainer of the day. Air Arabia (+1.1%) was also up. During trading, the carrier announced plans to expand Sharjah-Kathmandu service from Oct-2010.

All other Middle East carriers were flat. 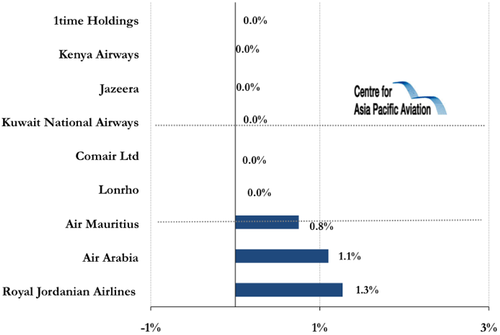