Comair (+12.2%) was the day’s biggest gainer, as the South African FTSE/JSE Africa All Share Index rose 1.3%. 1time Holdings was flat.

British Airways stated during trading that Comair’s operations will not be affected by BA’s cabin crew strike.

Also in Africa, Kenya Airways (+5.7%) also gained, as Kenyan stocks rose to a 16-month high for the week, boosted by the agricultural sector. The Nairobi Stock Exchange All-Share Index gained as much as 1.5% over the week. Lonrho (-2.0%) slid, despite the solid results in the wider market. 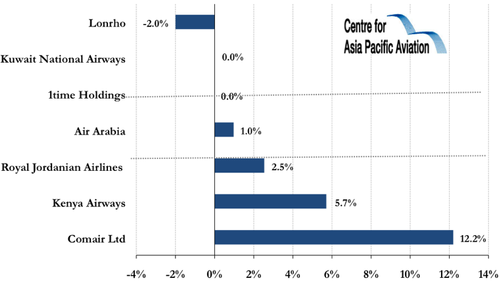