But some forecasts are showing Colombia’s GDP is likely to expand by 2.8% in 2018, followed by growth of up to 3.6% in 2019. That bodes well for the future of the country’s airlines, and Colombia’s second and third largest operators – LATAM Airlines Colombia and Viva Colombia – have ambitions to expand their positions in the Colombian market.

LATAM Airlines Colombia acknowledges short term pressures but believes the market will remain solid during the next couple of years, and Viva Air Colombia has plans for further expansion.

Colombia has charted rapid passenger growth during the past 20 years

Colombia, which is Latin America’s third largest aviation market, has charted rapid growth during the past 20 years, with passenger levels rising from 11 million in 1997 to close to 36 million in 2017. The country’s aviation regulator, Aerocivil, is forecasting that annual passenger numbers should reach 100 million by 2030.

For the seven months ending Jul-2018 Colombia’s total passenger growth was relatively flat, growing from 23.3 million for the same period in 2017 to 23.5 million in 2018. Domestic passenger growth slipped approximately 3% year-on-year, whereas international passenger levels grew by 7.6%.

Avianca, LATAM Airlines Colombia and Viva Air Colombia are the three largest airlines in Colombia’s domestic market and had load factors of 86%, 82% and 76%, respectively, during the first seven months of 2018.

Colombia's passenger share by airline for the 7M ending Jul-2018

LATAM experiences some softening of demand in Colombia

Mr Alvarez said that Argentina’s currency had lost 123% of its value during the past 12 months and Brazil’s BRL had fallen 33% during that same period. As a result of the currency pressure, demand on international flights from Argentina and Brazil has fallen.
At the end of 2Q2018 Avianca calculated that the COP had fallen approximately 8% against the USD.

Speaking to CAPA TV during the conference, Mr Alvarez remarked that demand in Colombia was a little slow because fare increases had not yet caught up to increasing fuel prices. However, he believes the market will “do okay over the next two years”.

He also stated that LATAM Airlines Colombia was aiming to grow its domestic share in the country from 20% to 25% to 30% during the next few years.

In the short term, capacity pressure could emerge in Colombia’s domestic market. Mr Alvarez stated that Viva Air Colombia was slated to add seven aircraft to its fleet during the next 12 months, with three coming online between Oct-2018 and Dec-2018. The head of LATAM Airlines Colombia said that the company would see how that increase in capacity would “work for the industry” in the domestic market.

Viva Air Group operator Viva Air Colombia is establishing a third base in Santa Marta. Its largest bases, based on departing frequencies, are Bogotá and Medellín. 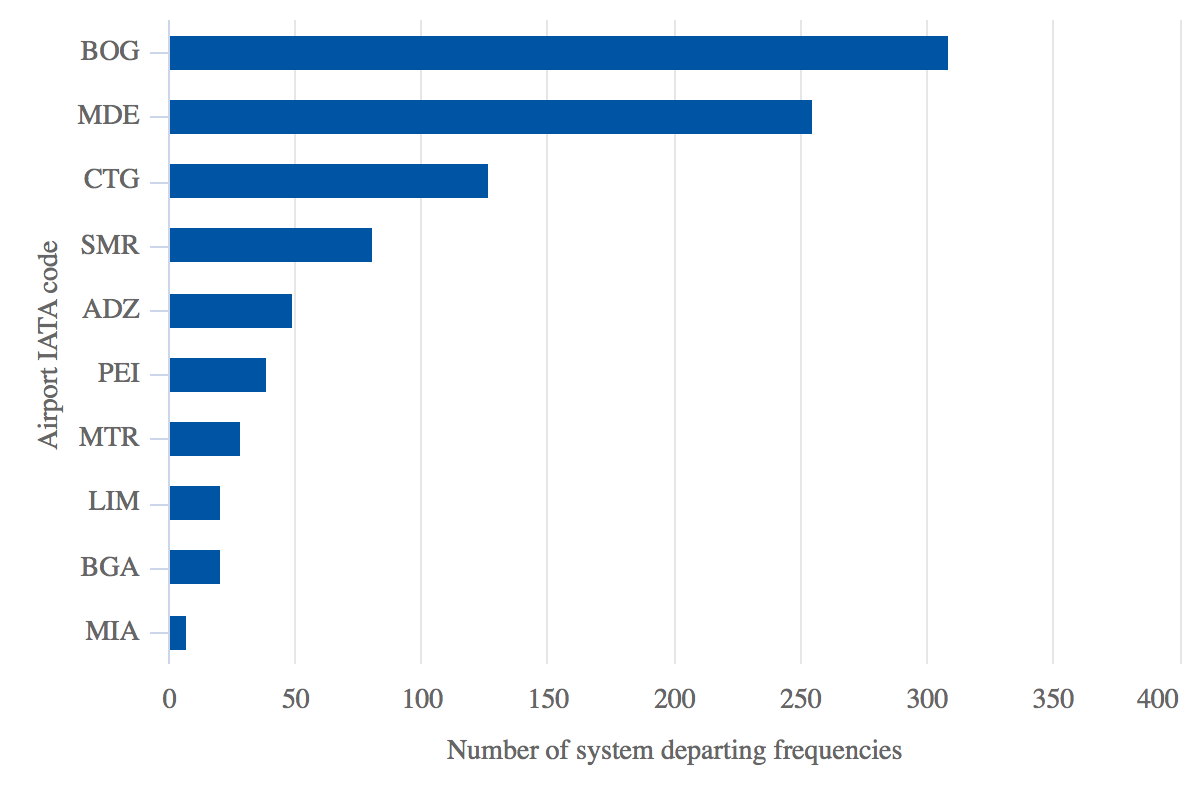 Viva Air Group President and CEO Felix Antelo also spoke with CAPA TV during the Summit and explained that it was time for Viva Air Colombia to diversify. He remarked that Santa Marta was a booming tourist destination and the airline was getting support from the local government and airport “with some incentives and some breaks, so we found that to be very useful to our model”.

The airline plans to base two aircraft at Santa Marta beginning in Oct-2018 and grow to four aircraft by mid-2019, said Mr Antelo.  Viva Air Colombia plans to launch new service from Santa Marta to Miami in Dec-2018, which marks the first international destination for Santa Marta. Viva Colombia also serves Miami from Medellín and its other international destination is Lima, Peru, which the airline serves from Bogotá. The airline ended flights from Bogotá to Panama City Pacifico airport in May-2018, citing a hike in airport charges.

Speaking to summit attendees, Mr Antelo stated that over the past six years the Viva Group had added 16 million passengers to the market, and was expecting that level to grow to 20 million by 2018. By 2022, the Viva Group projects carrying 63 million passengers. The company has close to 50 Airbus narrowbodies on order and expects to name a third country for its expansion over the next 12 to 24 months.

Colombia has been, and remains, one of the most promising aviation markets in Latin America due to its economic growth and overall stability compared with other countries in the region.

Although there could be some short term pressure stemming from higher fuel costs, currency devaluation and concerns about potential oversupply in the market place, Colombia’s passenger growth over the long term is poised to remain strong.