Construction of a second terminal is under way at Clark International Airport outside Manila. The terminal will likely become the first low cost carrier terminal (LCCT) in the Philippines when it opens in 2020.

Clark has been one of Asia’s fastest growing airports, driven partially by LCC expansion. Clark passenger traffic increased by 59% in 2017, to 1.5 million.

Traffic increased by another 73% in the first eight months of 2018, to 1.7 million, and is expected to reach 2.5 million for the full year. Clark is about to become only the fourth Philippine airport to surpass 2 million annual passengers, joining Manila, Cebu and Davao (the country’s three largest cities).

To meet 15 airline and industry CEOs at the Summit, click here. 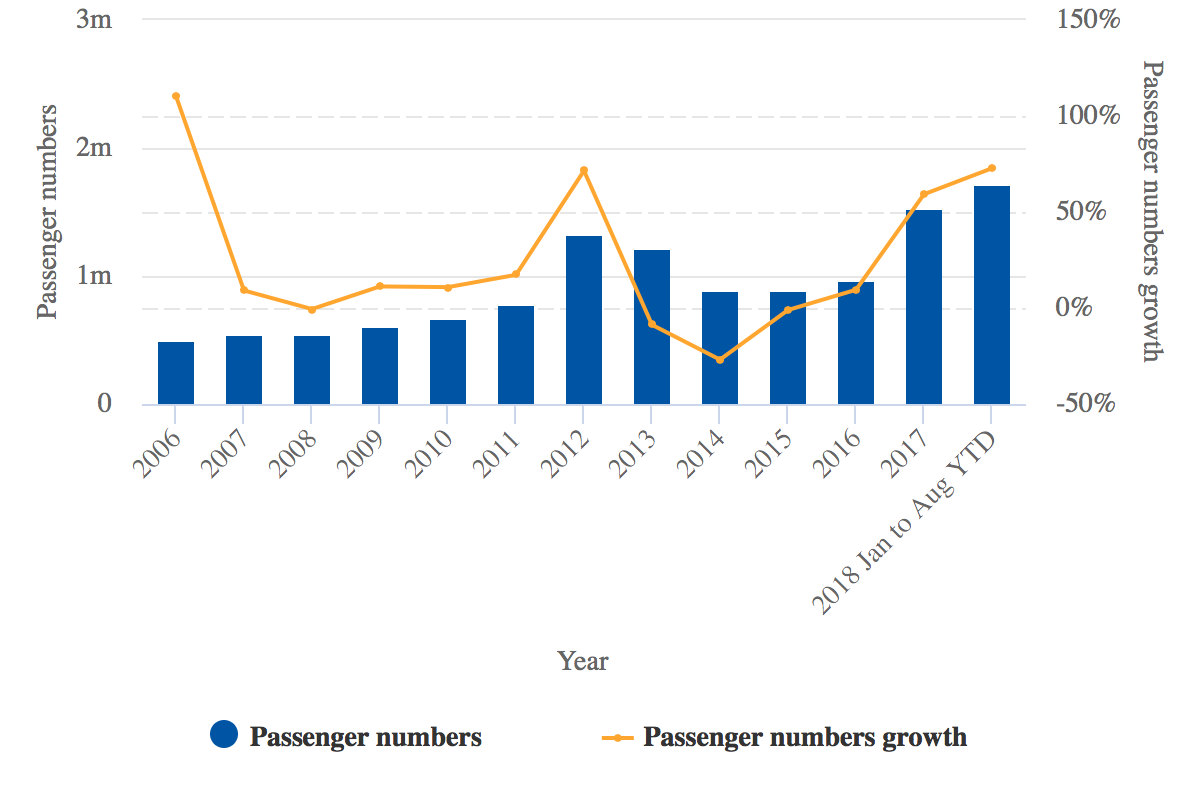 Construction of a basic terminal building began recently at Clark and is expected to be completed in 2020. A tender process is under way to select a company, or consortium of companies, to operate and maintain the new terminal.

The deadline for submitting bids has been extended until mid Oct-2018. Eight companies or consortiums purchased the bid documents in May-2018 and have since been preparing bids. A 25-year contract to the winning bidder will be awarded by Bases Conversion and Development Authority (BCDA), which is overseeing the project.

The AirAsia Group, which has been a strong advocate of LCCTs for Clark and several other airports in the Philippines, along with other Southeast Asian countries, has partnered with India-based GVK and Groupe ADP (formerly known as Aéroports de Paris). Other companies or consortiums preparing bids include: Filinvest Development Corporation, San Miguel, Metro Pacific Investments, Prime Asset Ventures, Central Luzon Infrastructure Consultancy and GMR/Megawide.

The GMR/Megawide consortium has operated Mactan-Cebu International Airport since 2014 and opened a second terminal at Cebu in Aug-2018. San Miguel owns and operates the airport at Caticlan, the gateway to Boracay Island, and has been considering a bid for several other existing and new airports in the Philippines.

The current airport and terminal are managed by Clark International Airport Corporation (CIAC), a BCDA subsidiary. BCDA was created by the Philippine government in 1992 after the US closed the Clark airbase and handed the airport back to the Philippines for potential civilian use.

Clark’s new terminal is expected to have capacity for up to eight million passengers per year. The airport’s only existing terminal, which is used by a mix of low cost and full service airlines, has capacity to handle up to four million passengers per year. The existing terminal reopened in 1993 and was initially expanded in 2008, providing capacity for up to 1 million annual passengers. Subsequent expansion projects were completed in 2010 and 2013, increasing capacity to 2.5 million and 4 million annual passengers.

Developing the second new terminal as an LCCT is sensible, given that LCCs will likely account for at least 60% of Clark’s traffic in future. The existing terminal should be large enough to accommodate full service airlines – even if FSC traffic at Clark triples. Currently FSCs account for approximately 1.2 million annual passengers at Clark.

However, it is not yet clear how many of the bidders will propose LCCTs. AirAsia has lobbied strongly that an LCCT proposal be selected – regardless of the winner. AirAsia has also been lobbying for LCCTs at other Philippine airports and the government seems to be receptive of the idea, recognising the prominent role LCCs have in the Philippines air transport sector and overall economy.

LCCs currently account for 51% of total seat capacity in the Philippines (based on CAPA and OAG data). At Clark, the LCC penetration rate is currently 50%.

However, the LCC penetration rate at Clark will likely exceed 60% by the time an LCCT opens because both Philippine LCCs – Cebu Pacific and Philippines AirAsia – are planning to expand at Clark. The opening of the LCCT in 2020 would drive further LCC growth at Clark as it will provide lower fees and charges.

Clark could be operating at capacity by the time the second terminal opens in 2020, given the airport’s recent rapid growth and the constraints at Manila Ninoy Aquino International Airport. Clark has benefitted, and will continue to benefit, from the congestion at Manila, located 100km to the south.

There is also increasing demand for travel to and from Luzon, the region of the Philippines where Clark is situated. The middle class population in Luzon has been growing rapidly and LCCs are well positioned as an increasing number of Luzon residents have the discretionary income levels to travel.

The full service airline group Philippine Airlines (PAL) is now the market leader at Clark. The PAL Group currently operates 95 weekly departures from Clark to 14 destinations (13 domestic and one international). Most of PAL’s flights at Clark are operated by its full service regional subsidiary PAL Express.

The PAL Group resumed services to Clark in late 2016 and has since pursued rapid expansion. PAL is adding another four domestic routes from Clark in late Oct-2018.

Over the next two months PAL is also adding capacity on several of its existing Clark routes. The PAL Group will operate 166 weekly departures at Clark in Dec-2018 to 18 destinations, generating over 17,000 one-way weekly seats

PAL will likely continue to expand at Clark in 2019 because of the constraints at Manila. However, Cebu Pacific and AirAsia will probably expand faster than PAL, resulting in market share gains.

Philippines AirAsia to re-establish hub and HQ at Clark

AirAsia could become the market leader at Clark by 2021 as it aims to open a hub at the airport. The group's local affiliate, Philippines AirAsia (PAA), is also planning to move its headquarters from Manila to Clark, an indication that Clark could become PAA’s largest base. PAA has not yet set a date for moving its HQ but it will likely coincide with the opening of the LCCT in 2020.

PAA was initially based at Clark when it began operations in early 2012. However, PAA suspended all services from Clark in late 2013 and did not serve the airport for more than three years. The airline resumed domestic services at Clark in Mar-2017 and resumed international services at Clark in Jul-2018 with the launch of three weekly services to Taipei.

Cebu Pacific is the largest airline group in the Philippines and has served Clark since 2006. Unlike AirAsia or PAL, Cebu Pacific has maintained an operation at Clark over the years.

The group will have 53 weekly departures at Clark in Dec-2018, to seven destinations (four domestic and three international). Cebu Pacific’s capacity at Clark will exceed 10,000 weekly seats for the first time, enabling it to overtake AirAsia to become the second largest airline group at Clark after PAL.

Cebu Pacific is planning further expansion at Clark in 2019 and 2020 as it accelerates narrowbody fleet expansion. The group is also considering shifting its Manila-based ATR 72s to Clark in order to maximise slots at Manila. The ATR 72s are operated by the low cost regional subsidiary Cebgo, which currently does not have any services at Clark (although it will be operating the Clark-Caticlan services when they resume in late Oct-2018).

PAL is already basing Dash 8 turboprops at Clark. Both Cebu Pacific and PAL are planning to use Clark instead of Manila for links to smaller domestic airports in the Philippines that cannot accommodate jets. For these kinds of services, Clark is emerging as an alternative hub to Manila.

Qatar Airways is the other in the top three foreign airlines. Along with Emirates, Qatar has the only long haul routes from Clark.

Clark should be able to attract more long haul routes, given the constraints at Manila and growth in the Luzon region. More services are possible to the Middle East, which is a large market for Filipino workers, along with potential services to North America.

Clark’s large and growing domestic network should help attract more foreign airlines – both low cost and full service. Long haul low cost services particularly need feed, which Clark is now able to offer. The opening of the LCCT could lead to more services from the existing foreign LCCs and the launch of services from several new foreign LCCs, including long haul LCCs.

However, AirAsia and Cebu Pacific will account for most of the future growth at Clark and would benefit the most from the opening of an LCCT. The Philippine government is evaluating LCCT options for several airports – a sensible strategy, given that price sensitive leisure passengers account for the majority of traffic in the Philippines.