Competition is to further intensify between leading Indonesian airline groups Garuda and Lion as Garuda accelerates expansion of its budget airline subsidiary Citilink to include regional domestic routes. Citilink now plans to operate a fleet of 80 aircraft by the end of 2015, including 30 70-seat turboprops, which should make it the second largest carrier in the Indonesian domestic market after Lion.

Citilink only carried 1.6 million domestic passengers in 2011, compared to 25 million for Lion and just over 12 million for Garuda mainline. But Garuda is committed to closing the gap with Lion, which became Indonesia’s largest carrier in 2009, by focusing on rapid domestic growth at both ends of the market.

Closing the gap at the budget end of the market will not be easy as the Lion Air Group, which includes regional subsidiary Wings Air, has its own ambitious expansion plans. But Citilink’s expansion comes off a much smaller base as the carrier is slated to end 2012 with a fleet of only 18 aircraft.

Citilink CEO Arif Wibowo tells CAPA that the carrier also now plans to introduce 70-seat turboprops into its fleet in 3Q2013. He says Citilink/Garuda aim to place an order for 50 70-seat turboprops by the end of 2012 and take delivery of an initial batch of 10 aircraft in 2H2013. The Garuda Group is currently evaluating the ATR 72 and Bombardier Dash 8-Q400.

Citilink to compete against Lion’s Wings in domestic regional markets

Citilink is now being used by Garuda to compete with Lion on major domestic routes. This battle is set to intensify and cover more routes as Citilink expands its jet fleet and introduces the turboprops.

Lion currently has a much bigger network than Citilink and generally has more frequencies where the two carriers already compete. Rapid expansion of its A320 fleet will allow Citilink to start competing with Lion on more domestic trunk routes, most of which Garuda already serves with a full service two-class product.

Meanwhile, the new turboprops will allow Citilink to start taking on Wings in regional markets where the Garuda Group does not currently have any presence. Wings already operates about 20 turboprops and is committed to expanding its fleet to 60 ATR 72s by the end of 2015, which will make it the world’s largest ATR operator.

Putting feeder aircraft at the budget rather than mainline brand is a rather unusual strategy. But it is logical for the Garuda Group given Indonesia’s unique market, which consists primarily of low fare operators on regional routes.

Garuda believes the small markets the new turboprops will be used for do not have sufficient premium demand to justify dual-class configuration aircraft or using the higher cost Garuda mainline operation. Garuda is keen to compete head-to-head with Wings and Lion in these smaller markets rather than come in with a higher priced full serviced product. Mr Arif points out there are 48 commercial airports in Indonesia which currently can only accommodate turboprops while only 37 airports can handle 737s or A320s.

Mr Arif says Citilink plans to forge a codeshare partnership with Garuda, allowing Garuda’s domestic network to be expanded significantly as Citilink begins operating to regional markets. A codeshare between the two carriers is currently not necessary as the Citilink brand typically operates alongside Garuda and is used to focus on a different segment of the market. With the introduction of the turboprops the Garuda-Citilink relationship will change significantly as Citilink will be used to feed Garuda’s domestic and international network.

Garuda established Citilink over 10 years ago but Citilink only began pursuing rapid growth about two years ago following the implementation of a new strategy at the Garuda Group. As part of a reinforced two-brand strategy, Citilink was formally separated from Garuda in Jul-2012, transitioning from a unit to a fully-owned subsidiary. Garuda aims to eventually pursue an initial public offering at Citilink.

The IPO, which Mr Arif says is now slated for 2015, could help raise capital to fund further fleet expansion. Until now all of Citilink’s new aircraft have been acquired using Garuda, including the 25 A320/A320neos ordered in Jun-2011. But the group is considering using Citilink to back the upcoming turboprop acquisition.

Mr Arif says Citilink expects the new turboprop operation to carry 2.6 million passengers in 2015. Citilink’s business plan envisions a total of 19 million annual passengers overall in 2015, including 16.4 passengers across its narrowbody network. Almost all these passengers will be domestic as Citilink only plans to begin international services in 2014.

Mr Arif tells CAPA that Citilink is planning major expansion of its network during 4Q2012 as 59 daily frequencies are added for a year-end total of 137 weekly frequencies. The expansion is being achieved through the launch of 15 new routes and additional frequencies on several existing routes.

According to Innovata data for the week of 05-Nov-2012 to 11-Nov-2012, Citilink currently operates 82 daily flights, or 574 weekly frequencies, to 10 domestic destinations. The carrier’s largest base is Surabaya, Indonesia’s second largest city. Surabaya currently accounts for about 60% of Citilink’s total capacity and its four largest routes, according to Innovata data. 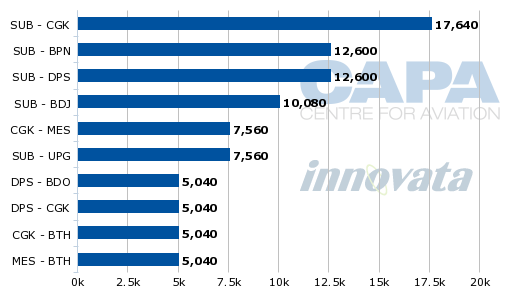 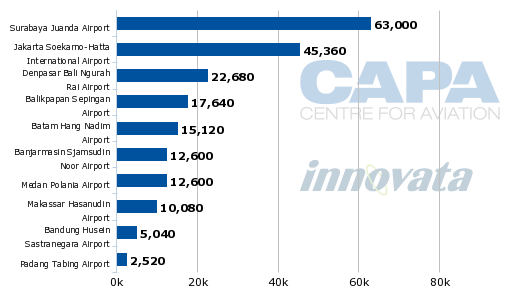 Citilink also has a base in Jakarta and recently opened a base in Batam, where it is launching several new routes. The carrier in Oct-2012 began serving Batam from Padang and Surabaya. Previously Batam, an Indonesian island located near Singapore, was only served from Jakarta and Medan.

Mr Arif says Citilink plans to open several new bases as it expands its fleet including at Lombok, Makassar and Balikipapan. Some of the new bases will be used to extend Citilink’s network to the west. Citilink currently does not yet serve any of Indonesia’s western islands as its network is focused on eastern and central Indonesia.

While Citilink will see much faster growth, Garuda also plans to continue to pursue rapid domestic growth of its mainline brand. Garuda-branded domestic passenger traffic through the first nine months of 2012 was up by 16% to 10.3 million passengers.

The domestic expansion at Garuda mainline is driven partially by the introduction of a new fleet of 100-seat regional jets in dual class configuration. Garuda’s smallest aircraft in recent years has been the 737-500 but in Oct-2012 it took delivery of the first of at least 18 100-seat Bombardier CRJ1000s.

Garuda CEO Emirsyah Satar tells CAPA that the carrier intends to use its CRJ1000s to operate point-to-point regional routes with an average stage length of about 2.5 hours. He says the turboprops will be used on much shorter routes and feed both Garuda mainline and Citilink’s A320s.

Garuda will have five CRJ1000s in operation from a regional base at Makassar by the end of 2012. The remaining 13 CRJ1000s on firm order (Garuda also has options for another 18 CRJ1000s) will be delivered by 2015 and based at Balikipapan, Medan and Surabaya.

The 18 CRJ1000s and 50 70-seat turboprops for Citilink are an important component of Garuda’s plan to double its group fleet to 194 aircraft by 2015. The CRJ1000s as well as additional 737-800s are intended to ensure Garuda maintains its position as the market leader at the full service end of the market as competition for premium passengers intensifies with Lion and others.

Lion plans to launch its new full service brand Batik Air in 2012 with 737-900ERs in dual class configuration. Sriwijaya Air is also planning to move upmarket and aims to battle Garuda and Batik at the top end of the domestic market.

Sriwijaya management tells CAPA its new full service airline, Nam Air, will launch services in 2013. Sriwijaya plans to allocate Nam Air some of the 20 737-800s and 20 Embraer E190s it is now in the process of acquiring. Sriwijaya is already a full service carrier, with its existing brand positioned between Indonesia’s LCCs and Garuda.

Lion has so far tentatively allocated to Batik 30 of the 207 737-900ERs the group plans to operate by the end of 2017. (Some of Lion’s 737-900ERs could end up in Malaysia, if Lion is successful at establishing its new Malaysian joint venture carrier Malindo in AirAsia’s home market.) Lion also has firm orders for 201 737 MAX aircraft for delivery from 2017 to 2026.

Lion has grown rapidly since 2007 and in 2011 transported 41.5% of domestic passengers in Indonesia, according to Indonesian DGAC data. Wings accounted for a further 3.3% share of Indonesia’s domestic market in 2011, giving the Lion Group a combined share of 44.8%. Growth at Wings has been relatively modest in recent years but is expected to accelerate as the 40 ATR 72-600s it has ordered are delivered. 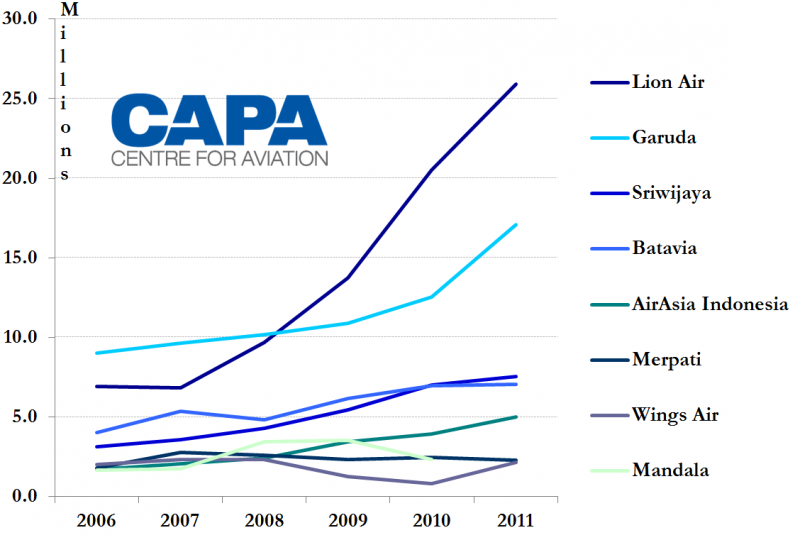 Source: Indonesian DGAC, AirAsia & Garuda
Note: Airlines with over 1 million annual passengers are included. Figures here show domestic and international traffic combined. Citilink figures are included within Garuda as Citilink operated as a unit of Garuda until Jul-2012. There are no Mandala figures for 2011 as Mandala suspended operation in Jan-2011 and did not resume operations until Apr-2012. 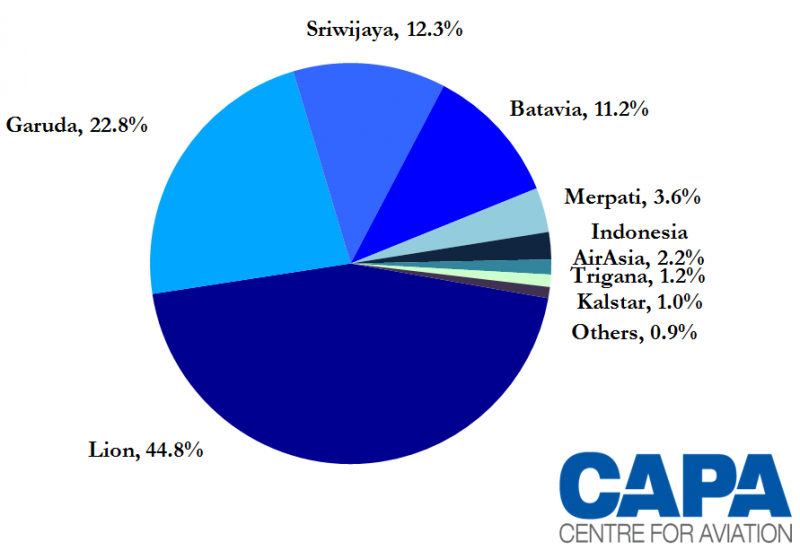 Lion’s ambitious president, founder and owner, Rusdi Kirana, has claimed the group will capture 60% of the domestic market by 2017. While Lion’s massive order book and pursuit of a multi-brand strategy will ensure the group remains the market leader, it is unlikely to capture more than a 50% share of the market given the rapid growth by the other major players.

Indonesia domestic traffic (number of passengers) and Garuda forecast: 2004 to 2015

Indonesia domestic traffic (number of passengers) and INACA forecast: 2006 to 2021 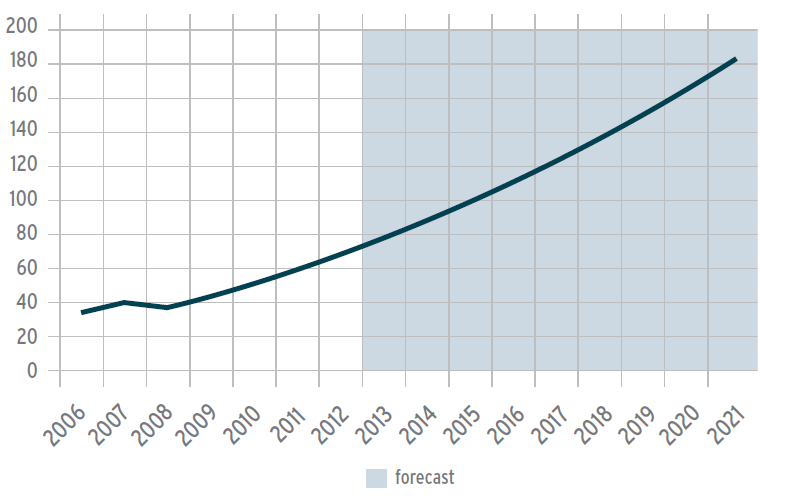 Garuda only assumes annual domestic passenger growth over the next three years of about 9% while the INACA projection assumes growth of nearly 20%. Given the growth chalked up over the last two years and the ambitious expansion plans in place by several Indonesian domestic carriers, the growth should easily be in double-digits.

Indonesia’s domestic market grew by 16% in 2011 to 60.2 million passengers, according to Indonesian DGAC data. According to a recent Garuda presentation, Indonesian domestic passenger traffic figures were up 13% through the first seven months of 2012. INACA estimates that the market will reach 70 million passengers in 2012, which would indicate growth of about 16%.

While several smaller Indonesian domestic carriers, including Indonesia AirAsia and new Tiger Airways associate carrier Mandala, are also keen to expand over the next several years, the country’s two leading groups will likely capture most of the anticipated growth. Garuda and Lion are both strong competitors and have the multi-brand strategies needed to capture all segments of Indonesia’s fast-growing domestic market. With Citilink ready to take on Wings on regional routes, and with Batik Air ready to compete against Garuda for premium passengers on domestic trunk routes, 2013 promises to be another interesting year for the dynamic Indonesian market.

This is the second in a series of articles on Indonesian carriers and the Indonesian domestic market. For the first article in this series see: