Cincinnati, Pittsburgh and St Louis airports most affected by carriers' moves over past decade

CAPA Centre for Aviation has assessed the winners and losers among US airports over the past decade and three have been especially affected by their primary carriers: Cincinnati, Pittsburgh and St Louis. Recent OAG data provides a clear picture of just what has happened in these locations in those 10 years.

When American absorbed TWA, St Louis had high hopes its former TWA hub status would be maintained but that did not occur, and Lambert found itself relegated to O&D status with overbuilt facilities designed for connectivity.

A similar, but slightly different fate befell both Pittsburgh and Cincinnati as the dominant carriers did not fail, but simply decided that the airports’ services as a hub were no longer required.

In each case, the effects have been a dramatic reduction in traffic and access to the global transportation network, but only one continues to decline each year. Unlike St Louis and Pittsburgh, Cincinnati has thus far been unable to attract a low-cost entrant even as Delta continues to reduce its presence.

As a result, the airport has seen a continuous drop in both movements and seats, which appears to have no end. Most interesting is the fact that despite its dramatic cutback, Delta continues to be unchallenged on many routes. Service between Cincinnati and San Francisco is no longer even daily (six per week) yet United has not entered the market. Delta also remains unchallenged to Los Angeles, San Diego, Phoenix, Las Vegas and Seattle, enjoying a monopoly status that is infrequently seen in today’s marketplace.

Even Orlando, that perpetual traveller’s favourite, has only a small fraction of the seats available daily from London. Furthermore, the operations are dominated by RJ services with only one widebody visitor each day, a DL 767 operating to Paris.

The city and its airport have experienced almost unprecedented declines in service despite the fact that, according to the US Census Bureau, it ranks as the 24th largest metropolitan statistical area (MSA) in the US. 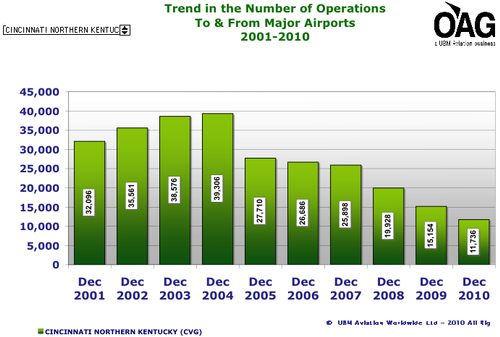 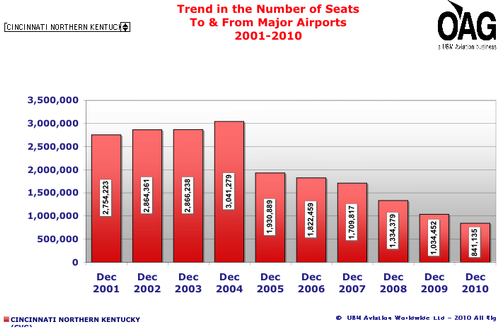 Pittsburgh displays a similar but slightly more positive picture over the decade. Abandoned by US Airways as a hub, the city and its airport were left with facilities that not only far exceeded demand but also had a master plan designed for connections rather than O&D operations. 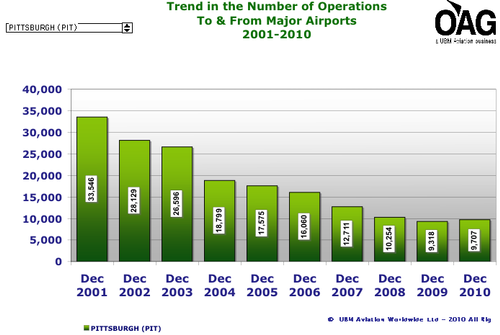 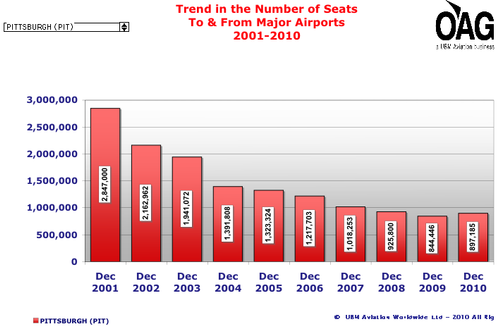 Unlike CVG, Pittsburgh has seen some stability since 2007 when the big yearly drops began to subside. This is all the more impressive since, though it is the 22nd largest MSA – and slightly larger than Cincinnati – it actually lost population in the decade while Cincinnati grew.

But in 2005 there was the arrival of Southwest. Plus, later in the decade both AirTran and jetBlue have selectively entered the market, creating a solid base of competitive low-cost service across the nation. Finally, unlike CVG, competing carriers offer mainline service from PIT to their hubs: CO to IAH, AA to DFW, UA to LAX and SFO, to name just a few.

Interestingly, as reported in an earlier piece on the airport, the sole intercontinental service is provided by Delta, operating a 752 to Paris. Though far from the position it occupied at the beginning of the decade, PIT appears to have controlled further damage and is in a period of stabilisation and slow retrenchment.

Showing some spirit in St Louis

Finally, St. Louis; the largest MSA of the three at 18th and with a marginal, but positive, rate of growth. The loss of TWA was a major blow to the city both economically and in terms of prestige. A new runway had been constructed to deal with the “hub” traffic and the resultant steady drawdown of service by American was seen as a betrayal of the promises implied by the merger.

However, Southwest had begun service at STL in 1985 and was well positioned to fill some of the gaps left first by a foundering TWA and later by a retreating American. The carrier received its own terminal and, following an initial post-9/11 adjustment, found a new equilibrium that lasted until things began to unravel with high fuel prices and the subsequent recession in late 2007 and beyond. 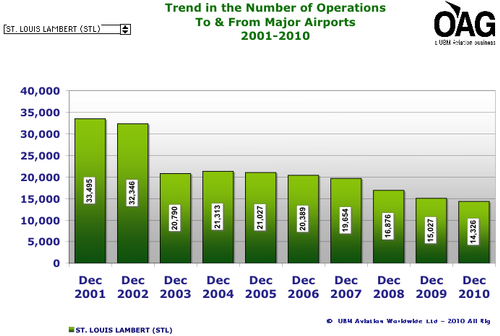 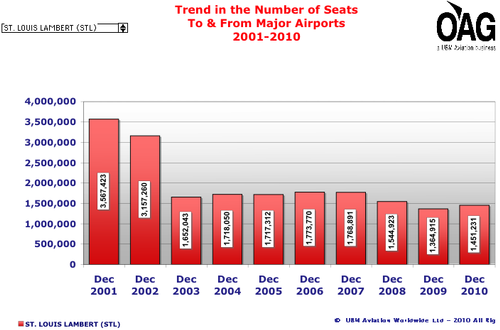 AirTran also presently serves STL and it remains to be seen just how the integration of AirTran and Southwest will affect the market. Southwest does not list STL as one of its “focus cities” and is unlikely to upgrade it to that status.

Of the three US airports most dramatically affected by the changes of the 21st century, St Louis has fared the best. It has direct flights to most of the nation’s major business centres and the drawdown by American has encouraged other legacy carriers to maintain, and even institute, mainline service to a goodly assortment of US cities.

Evidence shows that good air service is a necessary component for any region’s economic growth so that dramatic reductions come with a price for the communities affected. The US has more hubs than any other national market, including the EU. As such, it is unlikely that these locations will see a return of their previous status. Each was a creation of a specific moment in the industry’s development and subsequent events made each redundant, demonstrating that the shifting winds of aviation can have effects far beyond the airlines themselves.