Cincinnati Kentucky International airport faced its share of challenges as consolidation took hold in the US marketplace, but the airport has posted impressive growth during the past couple of years and earned the top spot as OAG’s fastest growing mid-size airport in North America during 2018.

Although Cincinnati remains a focus city for Delta and the airline is the dominant carrier at the airport, LCCs and ULCCs are fuelling the surge in growth at Cincinnati. The airport earned a key victory when Southwest Airlines launched services in 2017, and the airline's entry has resulted in lower fares to the Chicago metro area.

Cincinnati also recently marked a milestone when Amazon broke ground on a USD1.5 billion cargo facility on the south side of the airport’s airfield, which will create more jobs at Cincinnati International and ultimately drive economic growth for the region.

Similarly to so many other airports in the US, Cincinnati has had to reinvent itself after US consolidation during the past decade and a half has resulted in three large global network airlines and one large LCC essentially dominating the US market.

Once a hub for Delta Air Lines, Cincinnati eventually became a focus city for the airline after the merger with Northwest Airlines. Cincinnati’s status as a hub was cast into doubt, given its proximity to Detroit (400km) – a legacy hub for Northwest.

Cincinnati has been one of the more successful airports in reinventing itself and most recently gained recognition from CAPA's partner OAG in 2018 as the top growing mid-sized airport in North America.

OAG calculated that Cincinnati’s seats jumped 18% year-on-year, which was a faster growth rate than other mid-sized airports, including Austin, San Jose and New Orleans. 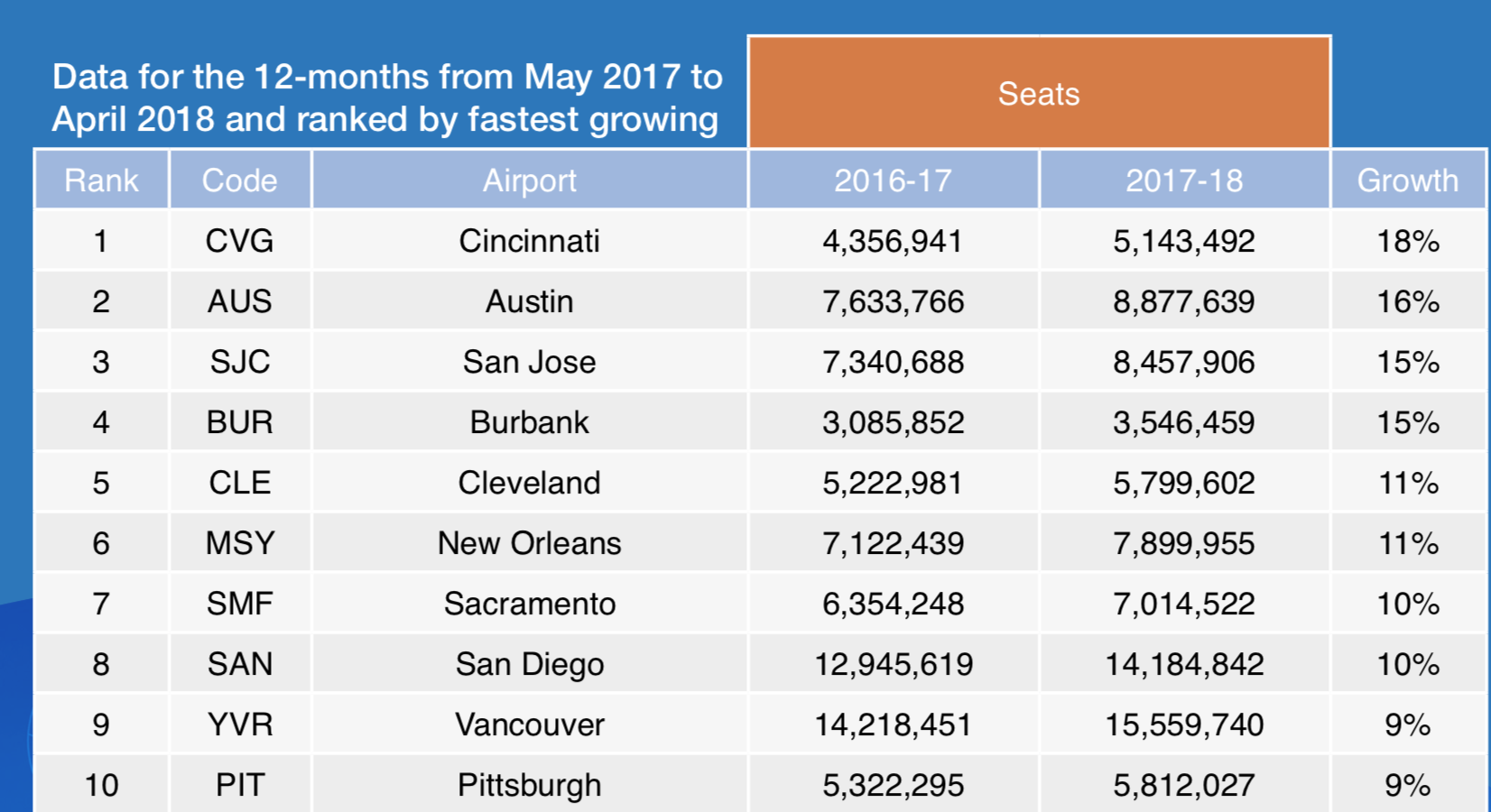 Cincinnati posted a 13% increase in passengers year-on-year in 2018, to 8.9 million, which is actually below the 15 million it handled in 2007 when it was still a Delta hub, but the growth is impressive and shows that the airport is working to carve out a solid position for itself in a post-consolidation environment. 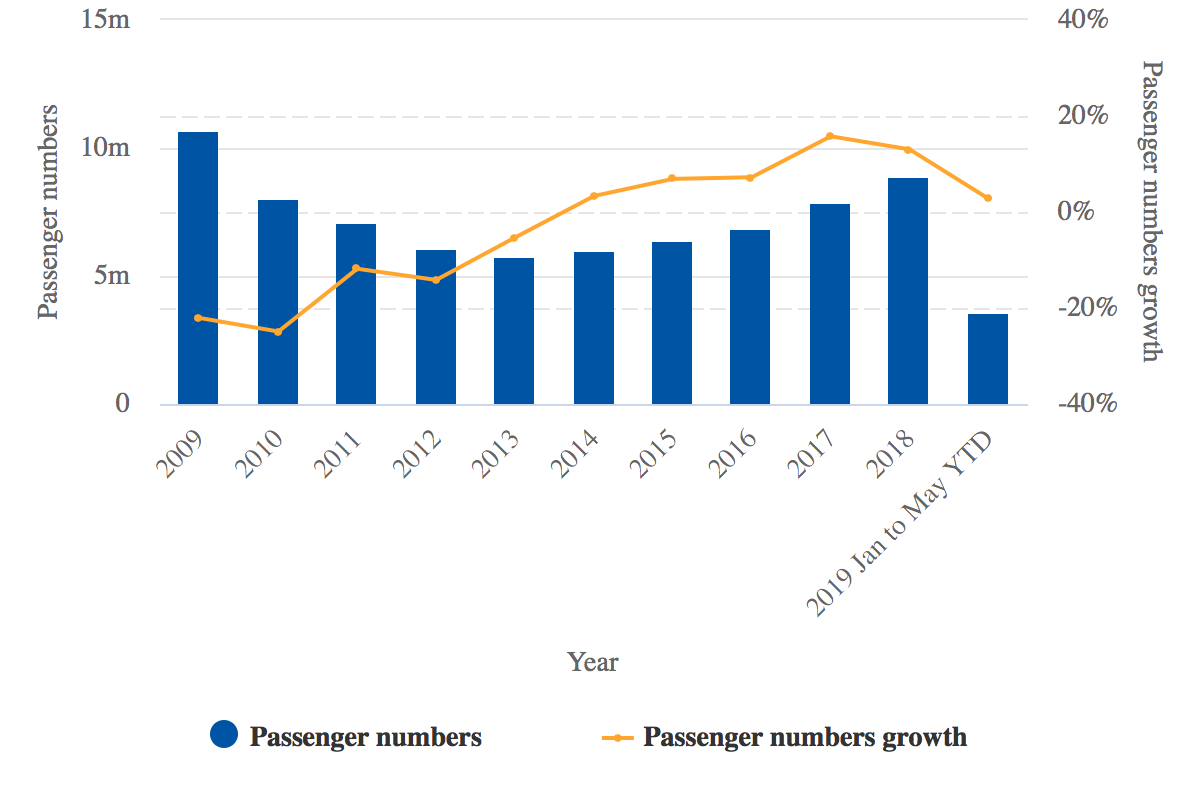 OAG's conclusion was that low cost airlines were driving growth at Cincinnati, with seat capacity by those airlines increasing by 62% year-on-year in the period over which it conducted its analysis.

Data from CAPA and OAG show that as of late Jun-2018 LCCs and ULCCs as a whole represented 32% of Cincinnati’s seats. And even as Delta remains the airport’s largest airline measured by seat deployment, the ULCCs Allegiant and Frontier have double digit seat shares at the airport and Cincinnati serves as a base for Allegiant Air. 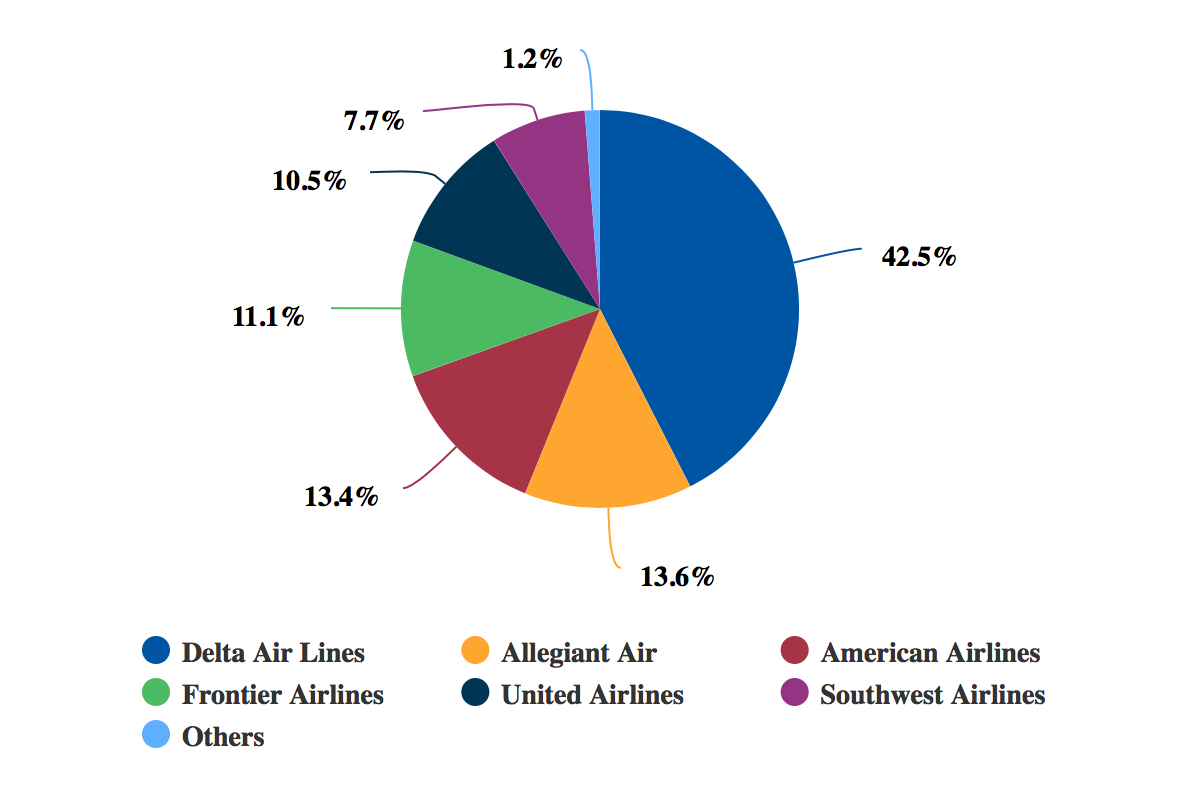 Cincinnati made major progress in its reinvention in 2017 when Southwest Airlines introduced services from the airport. Data from CAPA and OAG show that as of late Jun-2019 Southwest currently operates flights from the airport to Baltimore-Washington International, Chicago Midway, Denver and Orlando (its service to Orlando is Saturday only).

Although Southwest’s unit costs are growing, its performance in that metric is still below those of American, Delta and United, and OAG’s snapshot shows that its entry into Cincinnati is no doubt offering passengers travelling to Chicago the benefit of a lower fare option.

In addition to securing service from Allegiant, Frontier and Southwest during the last few years, Cincinnati was selected by Amazon as its primary hub for Prime Air delivery service.

The USD1.5 billion investment will eventually support a fleet of 100 aircraft and includes the lease of more than 1,000 acres of airport land. Cincinnati International has also calculated that the Amazon project will add broadly 2,000 jobs to its base of 10,000 airport workers.

Amazon’s commitment is an important development for Cincinnati as the retailing behemoth takes steps to exert more control over its delivery stream. Those additional jobs not only will bolster Cincinnati’s economy, but will also diversify the airport’s revenue stream through the presence of one of the world’s largest companies.

Cincinnati has also garnered what appears to be a steadfast commitment from Amazon CEO Jeff Bezos.

cincinnati.com recently quoted Mr Bezos at the ground breaking for the new hub, declaring:  "We're going to move Prime from two-day (delivery) to one day and this hub is a big part of that. I'm super excited about that".

Cincinnati International has embraced its new role as a focus city for Delta and that new role has allowed the airport to court LCCs and ULCCs in full force. The result has been a surge in low cost growth at the airport, which seems to have had the desired effect of lowering fares in the market.

Amazon’s decision to build a hub for its growing Prime Air delivery service is a boon for Cincinnati International, and provides the airport commercial diversification that other mid-sized airports in the US will not enjoy.