There are some more worrying signs in China. The Shanghai Composite Index tumbled 5% yesterday, registering its biggest one-day percentage drop in more than eight months. Shares have plunged 20% in the past month to lows not seen in over 12 months. Moves by Beijing to curb rampant property market speculation have raised nervousness among retail investors.

The sell-off came despite a sharp rise in China's Leading Economic Index (LEI) in Mar-2010. The Conference Board noted China’s economic growth performance “remains strong”, but there is a strong positive impact from the rise in construction activity. It added, “developers may have been front-loading projects in anticipation of controls on the real estate market that were subsequently implemented in late April". It concluded, "the recent behaviour of the LEI for China suggests the economic expansion is unlikely to accelerate further through the Summer months".

Airline stocks have sagged on the evolving outlook - none more so than Hainan Airlines, which has plunged more than 40% in a month.

Hainan Airlines share price movements over the past month 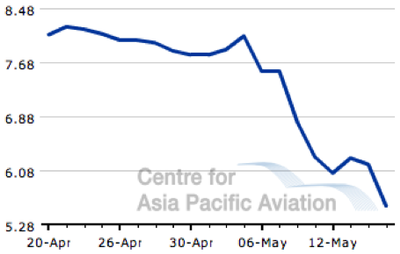 Elsewhere, Virgin Blue took another caning in the market yesterday, slumping 8.3% on the worsening global economic picture and rising fare discounting in the domestic Australian market. 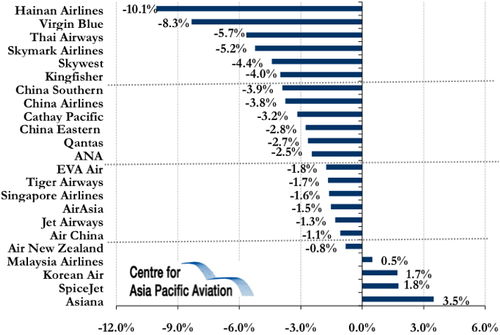