The nascent international LCC footprint of Chinese low-cost carriers will grow as Juneyao Airlines in Aug-2012 opens routes to Japan, becoming the second Chinese LCC to have services beyond China. The first was Spring Airlines with services to the Tokyo area, and Spring intends to open new Japanese cities but first will reportedly bring new countries – South Korea and Thailand – to its route map.

Both carriers are based at Shanghai, are privately owned and are preparing for IPOs. Their operation alongside the three big state-owned carriers does not enjoy a transparent framework, and as the state-owned carriers use the short-term future to bolster domestic performance, Juneyao and Spring may find more favourable support for international services, which in turn balance the international LCCs that serve China. Juneyao's international network is in its early days, but so far it appears to be targeting more leisure destinations whereas Spring is pursuing service to populous cities.

While Juneyao Airlines technically has international services via flights to Hong Kong, its first regularly scheduled international service outside of greater China will be to Okinawa, Japan's semi-tropical leisure centre. It plans to launch four weekly services in Aug-2012 from its base at Shanghai.

Between Shanghai and Okinawa, China Eastern now offers 12 weekly flights during the peak season. Juneyao's schedule has not been finalised, but assuming it operates its A320s to Okinawa (the carrier also has two A319s), Juneyao will offer 632 weekly one-way seats, trending below the capacity provided by China Eastern. Juneyao's launch will come at the tail end of the summer high season. 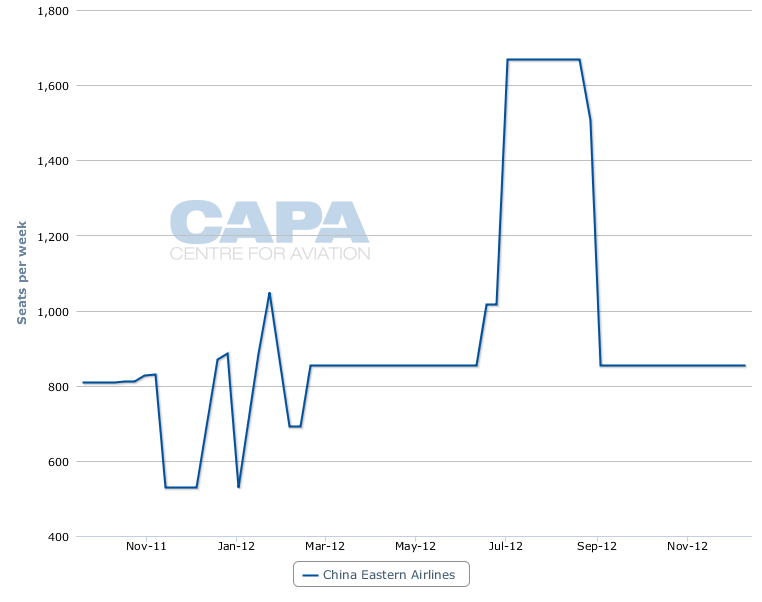 Juneyao's service to Okinawa represents further international service for the airport. Okinawa's leisure orientation has seen it secure service from around North Asia and help break the hold Tokyo, and to a lesser extent Osaka, have as being the primary international points for Japan. Japan's many regional cities are ripe for direct short-haul international services, particularly services from North Asia's small but fast-growing LCC sector, that bypass Tokyo and Osaka.

In Mar-2012 Juneyao was approved for four weekly services to Thailand's Phuket, another leisure oriented destination. Shanghai-Phuket sees service from Shanghai Airlines, which has double daily flights in the peak season. 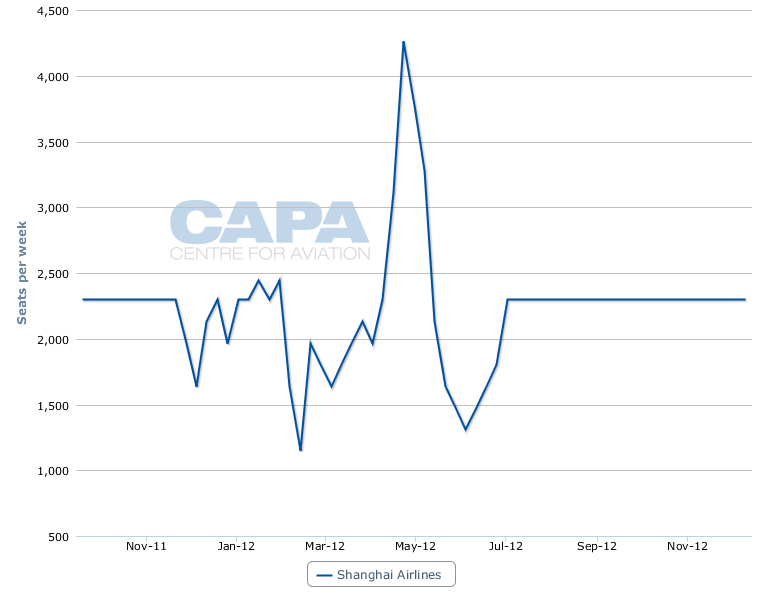 Okinawa and Phuket are appealing for their blue skies and nature-oriented vibe, which are lacking in China's industrial cities where manufacturing and pollution limit the number of so-called blue skies days. The relationship China has with nature-soaked destinations is not dissimilar from that between Northern Europe and the Mediterranean, except that China's quench for clearer air runs year-round.

The Maldvies has boomed in recent years with Chinese arrivals while Guam and Saipan in the Pacific are now duelling for more Chinese services. Saipan sees service from Guangzhou and Shanghai by Sichuan Airlines while new carrier Saipan Air intends to link the island with Beijing and Shenyang.

Once the Okinawa and Phuket services are launched (Juneyao has been vague on details for Phuket), international seats (including to Hong Kong) will double from 2% to 4% of all available seats for the carrier based on current projections.

Juneyao in Mar-2012 reported that it met with representatives from Nepal for the possibility of services between Shanghai and Kathmandu. There have been no further reports. The Chinese-Nepal market is relatively small, although perhaps under-served, and unlikely to appeal in the near future as a leisure destination. There is little international traffic that originates from Nepal.

Spring to expand internationally beyond Japan

Whereas Juneyao is so far targeting leisure destinations, Spring has focused on major cities, first launching regularly scheduled international services to Japan, where the carrier now serves Ibaraki (an alternative airport to the Tokyo region), Takamatsu and Saga (an alternative to Fukuoka) with limited weekly frequencies. Spring intends to expand to Tokyo Narita, which in Apr-2012 confirmed it would construct a dedicated LCC facility.

Spring also intends to grow its Japanese network from the present three routes to 10, with the carrier specifically stating that Hokkaido, Kyushu, Nagoya and Osaka are possibilities. Spring also intends to expand its model to operate a subsidiary in Japan like AirAsia Japan and Jetstar Japan.

Spring CEO Zhang Xiuzhi, according to local reports, said the carrier has selected an undisclosed non-airline Japanese company to be its joint-venture partner and fulfil the local ownership requirement for Japan-based carriers. Operations are expected to commence in Jul-2013. The Japanese base so far is independent of Spring's plan to grow its Shanghai-based fleet to 70 A320s by 2015, up from the present 30.

See related article: China's Spring Airlines evolves into a hybrid carrier as it targets a Japanese operating base

Spring's Japanese destinations are only currently served from Shanghai. The carrier is expected to launch Japanese services from a second point, Shijiazhuang in northern China, according to local reports. But before further Japanese expansion, Spring intends to add South Korea and Thailand to its route map via services to Bangkok, Cheongju and Jeju, according to local reports. The carrier has not finalised schedules but will reportedly start daily Shanghai-Bangkok service in late Jul-2012, four weekly Shanghai-Cheongju in Aug-2012 and three weekly Shanghai-Jeju at an undisclosed points.

Local reports of Spring services to Malaysia – where AirAsia has already developed an extensive network – appear to be incorrect. A Shanghai-Kuala Lumpur route would also push the upper envelope of the four/five hour range Asian LCCs prefer to operate their narrowbodies within.

Spring would be the only carrier on the Shanghai-Cheongju route (the only services to Cheongju from China are limited frequencies on Asiana from Beijing and Korean Air from Hangzhou, indicating a tendency in South Korea like in Japan to concentrate on major cities). Spring would face competition from China Eastern and Jin Air (the LCC subsidiary of Korean Airlines) on the Shanghai-Seoul route and a number of carriers between Shanghai and Bangkok. 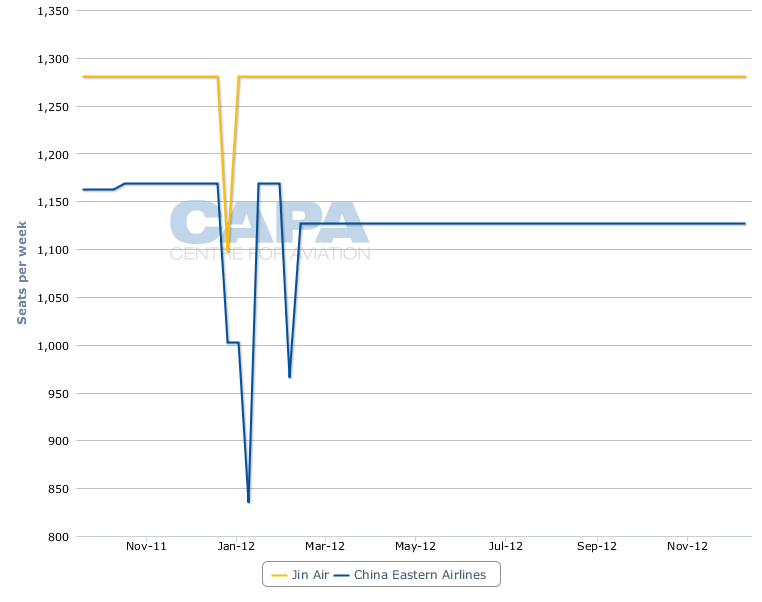 Shanghai to Bangkok Suvarnabhumi International capacity by carrier (seats per week, one way): 19-Sep-2011 to 16-Dec-2012 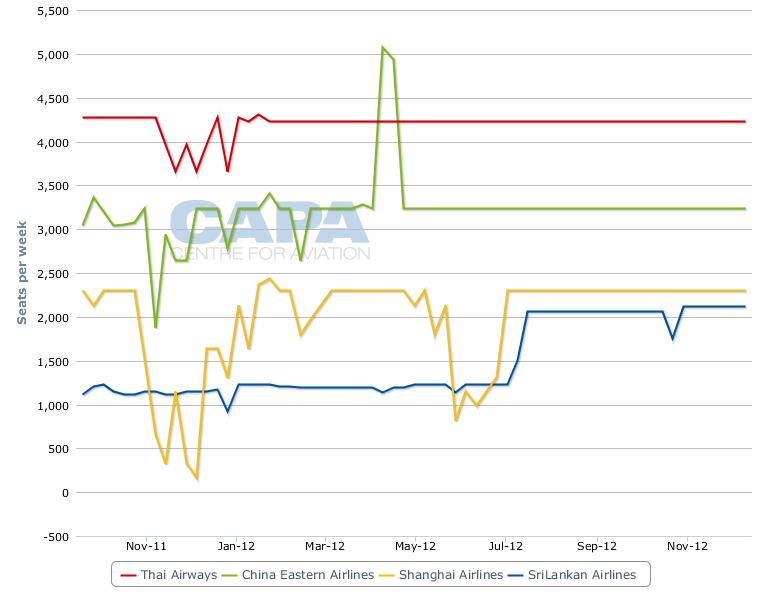 Once Spring opens these three services its international seats (including to Hong Kong) will enter double digits, accounting for 10% of all available seats.

Definition of LCC in China is not convention, but opportunities abound

The definition of a Chinese LCC is not strict, with Spring Airlines adopting a hybrid model including complimentary checked luggage while Juneyao Airlines even has a first class cabin. With fares not always significantly lower than traditional full service carriers, this reflects the current state of the Chinese market. Demand is high and placing an aircraft in the market is likely to result in the aircraft being full, irrespective if the aircraft is with a full-service carrier or LCC. That allows Juneyao and Spring to enjoy yield premiums; Spring's profit has grown while China's Big Three – Air China, China Eastern and China Southern – have seen their profits decline and warned of more challenging times ahead. Spring in Apr-2012 stated its Japanese routes were profitable, without supplying further commentary.

The feasibility of a Chinese LCC has been raised given Juneyao and Spring being the only major notable examples of LCCs while others have failed in past years. Indeed, future carriers do face the challenging task of navigating China's tightly controlled political and aviation scene, but for the present carriers, opportunities abound, even if at present there is more encouragement at a political level for international than domestic services.

While Juneyao and Spring may be closer to a full service carrier than a LCC, they do bring efficiencies to their models, and hence a competitive advantage over legacy carriers. They tend to operate a leaner structure, reducing head count, with a higher aircraft utilisation rate. Spring has even lobbied for the Government to lift its ban on domestic red-eye services, which will allow it to further boost its utilisation.

There are setbacks like distribution and marketing that see flights mainly be promoted in the mainland. Offering connecting or through services in the future will allow Spring to further boost passenger volumes.

And while Chinese carriers may have improvements to make to be recognised on an international standard level, Spring and Juneyao do bring different thinking – including a focus on alternative (cheaper) airports and regional cities – to what can be a sector filled with inertia.