Chinese airlines shares slumped yesterday as the benchmark Shanghai Composite Index fell 1.9% to an 11-month low on concerns Beijing will tighten credit to prevent the economy from overheating. Inflation in China is at an 18-month high, while bank lending is surging ahead of expectations.

The wave of selling triggered a weakening in the yuan against the US dollar, which is a problem for the heavily indebted Chinese airlines. Hainan Airlines tumbled 7.5% in Shanghai, following a big fall yesterday, while in Hong Kong trading, China Eastern slumped 6.4%, Air China fell 3.9% and China Southern 2.8%.

Cathay Pacific meanwhile gained 2.6% yesterday. On Monday, the airline upgraded its forecast for FY2010, expecting "strong" financial results for the first half of 2010 due to an improvement in cargo and premium passenger revenues from the end of 2009. The carrier warned significant increases in fuel prices or any deterioration of the economy remains a threat to profitability. 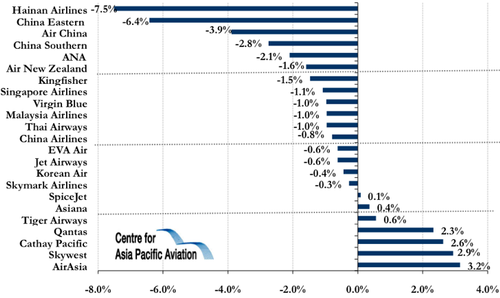