Chinese airline shares gained considerable ground on 21-Jun-2010 as the government moved to loosen controls on the exchange rate, allowing the yuan to strengthen against the US dollar. 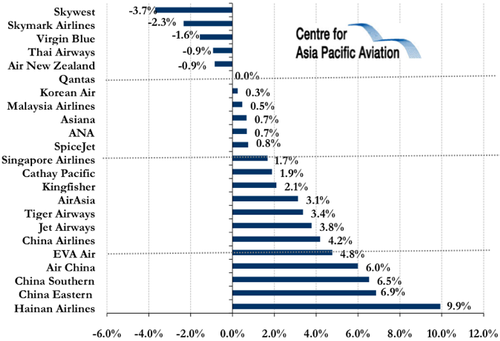 China Southern, the nation’s largest airline by fleet size, took delivery of its 400th aircraft - an A330-200 - this week. The carrier plans to serve 70 million passengers in 2010.

In 1995, the entire country had a fleet of 400 aircraft – such has been the remarkable expansion of aviation in China. This year alone, China’s aviation industry is expected to add 208 new aircraft and retire just 17, for a net increase of 191 aircraft, according to the CAAC.

Ascend data puts the 2010 delivery total to Chinese mainland airlines at 188 aircraft – representing a peak year for deliveries – with 171 scheduled for 2011. (The difference of 20 aircraft between the CAAC and Ascend’s figures could relate to the timing of the finalisation of delivery dates for some aircraft).

Significantly, Chinese airlines accounted for over 40% of total Asia Pacific aircraft deliveries last year – a level it will maintain, based on known orders in 2010 and 2011. It is a significant increase from around one-third of regional deliveries over the past several years. The up-tick reflects China’s more rapid growth profile than its neighbours and the fact this growth is coming off such a large base. 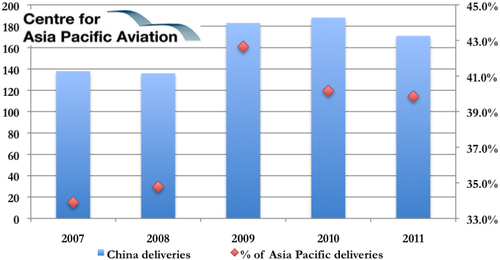 Total passenger numbers soared 18.2% last month in China to 21.5 million, according to the CAAC. Domestic numbers rose 16.8%, while international passenger volume surged 40.6% to 1.6 million. For a full breakdown and ongoing coverage of the Chinese aviation market, which CAPA covers best, subscribe to Asia Pacific Airline Daily.