Investors’ concerns over curbs to China’s property market and Europe’s debt woes were not helped by a revision to The Conference Board’s Leading Economic Index for Apr-2010 from a 1.7% gain reported on 15-Jun-2010 to just a 0.3% increase, due to a “calculation error” on construction. The Conference Board stated the correction does not affect its outlook for the Chinese economy, confirming, “The rising trend of the LEI has been moderating since the middle of last year, suggesting there is no strong basis for assuming accelerating growth.”

US markets took a big hit overnight as The Conference Board’s Consumer Confidence Index for the US dropped sharply in Jun-2010 to 52.9 (1985=100), down from 62.7 in May-2010. The Conference Board stated: “Consumer confidence, which had posted three consecutive monthly gains and appeared to be gaining some traction, retreated sharply in June. Increasing uncertainty and apprehension about the future state of the economy and labour market, no doubt a result of the recent slowdown in job growth, are the primary reasons for the sharp reversal in confidence. Until the pace of job growth picks up, consumer confidence is not likely to pick up.”

It follows Monday’s report on the Euro Area Leading Economic Index showing a 0.5% fall in May-2010 to 109.7 (2004 = 100), leading The Conference Board to conclude the rebound in economic growth “may have peaked during the second quarter”. However, it added: “It is too soon to say that the recent improvement in the economy will subside strongly in the near term.”

Hainan Airlines slumped 8.8%, while China Eastern, Air China and China Southern all fell greater than 3%. Korea’s Asiana Airlines gained again on hopes of rising demand as the US and South Korea move closer to signing a free trade agreement. 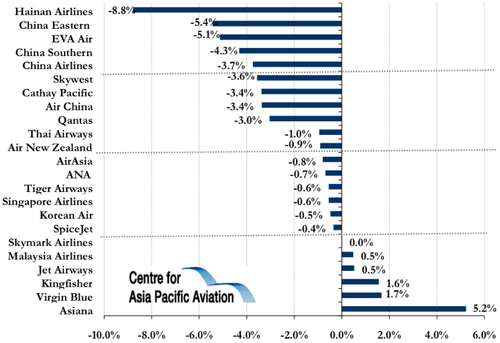