China Southern Airlines is on track to achieve its target of having 55 weekly flights to Australia/New Zealand by the end of 2015, with peak southern summer flights to reach 52 weekly. China Southern's presence in Australia has been highly visible, but its growth in New Zealand has been quieter. After entering New Zealand just three years ago, China Southern in 2015 will have more peak capacity there than Cathay Pacific. China Eastern will also enter the market, although only for the peak season, while Air China has flagged entry into New Zealand as part of a proposed joint venture with Air New Zealand. Chinese visitor numbers to New Zealand have doubled in four years.

China Southern is continuing to grow in New Zealand. China Southern entered the market in Apr-2011 with three-weekly flights to Auckland. This was increased to daily at the end of 2012, with regular service by the A330 (the A380 made token appearances). China Southern started deploying its 787 towards the end of 2013. Dec-2013 brought      the start of additional frequencies each week. These mostly continued through 2014, and from Nov-2014 China Southern is offering double daily service in the peak southern summer. Double daily 787 service will be up-gauged to one daily 787 and one daily 777-300ER. Initially this was for three months from Jan-2015 but extended to four months from Dec-2014. Auckland is China Southern's only regular New Zealand destination. There have been limited charter flights in the past to Christchurch.

The 777/787 schedule will offer 18% more seats than double daily 787 service. The proportion of premium seats (first and business) will be the same, but China Southern will be unlikely to gain high yields in its premium cabin for the leisure-heavy route, and this will be exasperated by the 777's larger size. The 777-300ER will see the introduction of China Southern's premium economy (not offered on the 787), although again attaining a yield premium will be challenging. China Southern's 777 premium economy is eight-abreast (with more legroom) compared to nine-abreast in economy.

Nonetheless, Cathay has been challenged by China Southern on the Auckland route. China Southern in comparison is mainly catering to the Chinese market. Air New Zealand's Hong Kong capacity is relatively flat throughout the year (one daily) while its Shanghai service is growing, partially through aircraft up-gauging. 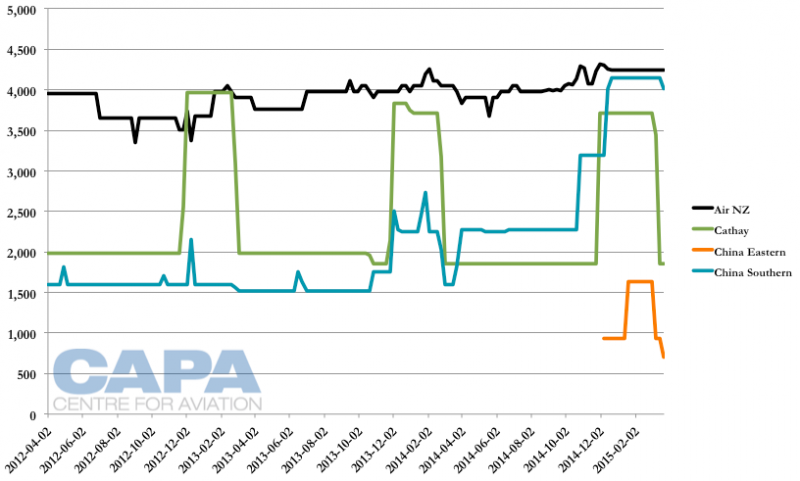 China Eastern will enter New Zealand during the peak season only

China Eastern had been put off by growth in Australia and New Zealand but lately has been warming up, growing in Australia and now over the southern summer offering a limited Auckland service to test the market.

The China-New Zealand air service agreement was expanded in 2012 to allow for 21 weekly flights from each country. China Eastern's seasonal A330-200 flight will use up that last allocation, but in Nov-2014 the allotment was doubled to 42 weekly flights from each side. The 2012 expansion caused some frustration for Air New Zealand, which was unable to use as much capacity as its larger Chinese peers.

The Nov-2014 expansion has probably caused even more frustration, but New Zealand however appears to be putting the tourism interests of nation ahead of the national carrier.

New Zealand has experienced a rapid increase in Chinese visitors since 2011, when visa procedures were simplified for Chinese nationals. China Southern's 2011 launch of direct China-New Zealand services has also grown the market. Visitors from mainland China to New Zealand have doubled from 102,000 in 2009 to 229,000 in 2013, according to Statistics New Zealand. Visitor numbers in the first nine months of 2014, the latest data available, are up a very slow 2.6% compared to the large double digit rates of recent years. However, these figures do not yet include arrivals from Oct-2014 (during one of China's main holiday periods) and Dec-2014 (which starts the peak of New Zealand's summer travelling period).

These statistics include passengers identified as having arrived from mainland China. About 95% are travelling on a mainland Chinese passport. The balance are on a Hong Kong or US passport, with most such passport holders likely mainland Chinese citizens entering New Zealand on a secondary passport that has easier entry requirements. A small portion could be expatriates or sixth-freedom passengers. 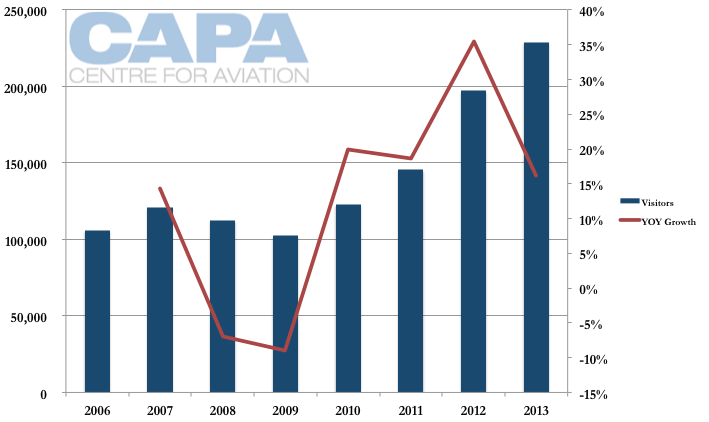 In 2006, over 70% of Chinese visitors arrived in New Zealand via Australia, according to Statistics New Zealand. The remaining 30% arrived from various cities in greater China or other Asian hubs. This has progressively changed. The balance was almost equal in 2013 with a 49%-51% split between Asian and Australian hubs. In the first nine months of 2014, Asian hubs for the first time transported more Chinese nationals (53%) than Australian hubs (47%).

Share of Chinese visitors to New Zealand by location of departure point: 2006-9M2014 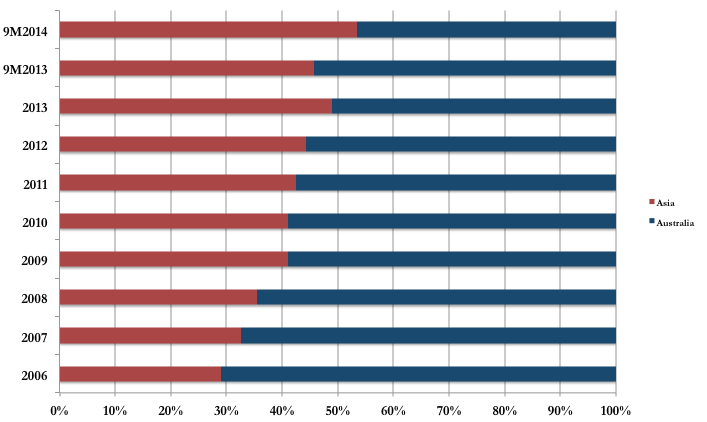 But Australia no doubt retains a significant influence. Australia's 51% share in 2013 compares with 42% coming from cities in greater China, including Hong Kong. The balance arrive from other Asian hubs. Shanghai has slightly grown market share while Beijing has lost all traffic following the exit of Air New Zealand from Beijing. Guangzhou has been a clear grower.

Share of Chinese visitors to New Zealand by departure point: 2006-2013 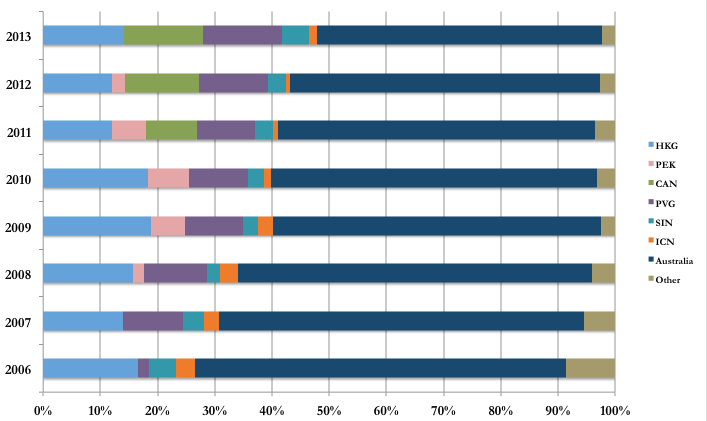 Whereas Hong Kong was once the second-largest departure point (after Australia), Guangzhou and Shanghai now rival it.

The popularity of Australia as a departure point reflects Australia's geographic advantage as well as the popularity of Australia and New Zealand being dual destinations for Chinese visitors. This was one factor in the partnerships between Qantas and China Eastern/China Southern. While Qantas gained access to China, the Chinese carriers gained access to domestic and trans-Tasman feed.

A potential partnership between Air New Zealand and Air China could bring domestic New Zealand destinations as well as trans-Tasman services, but these could be less important to a Chinese partner than those provided by Qantas in the larger Australian market. What Air New Zealand lacks in size it can offer to Air China insights on how to be a well run airline. That is knowledge Chinese carriers desperately seek – sometimes more than passenger feed – and is knowledge Air New Zealand, one of the smartest little airlines around, undoubtedly has.

Statistics New Zealand identifies four Australian cities as being the main transport point for Chinese visitors to New Zealand from Australia: Sydney with a 32% share, Brisbane 29%, Melbourne 28% and Gold Coast 11%. (Other points, like Cairns, were not counted.) 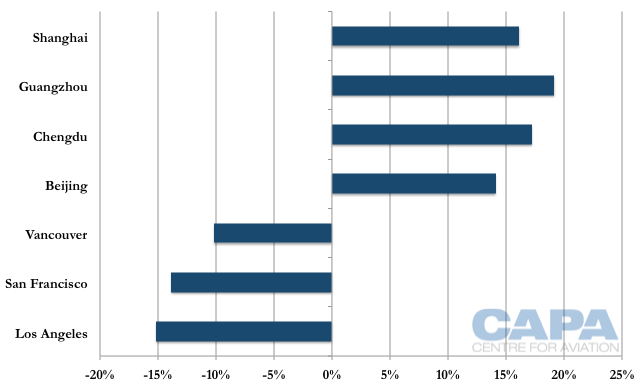 The implication of Auckland's geographical disadvantage is that it will be difficult to offer triangular trips that take in Australia and New Zealand because of the backtracking through New Zealand. Air New Zealand lacks an option for outbound flights from Australia to China. Virgin Australia's long-haul international expansion appears to be postponed, and in any event will be small – and might not even include China. Singapore Airlines is not partnering with Air New Zealand out of Australia, and in any event SIA has a relatively limited Chinese network and Singapore is slightly out of the way between Australia and China.

However, Air China's northern hub in Beijing is not convenient and Air New Zealand may ultimately need another Chinese partner. Air China's hub in Shanghai is still small while its Chengdu hub is too weak a point to launch long-haul Australia/New Zealand services, as Sichuan Airlines is finding. Air China partly owns Shenzhen-based Shenzhen Airlines, but its geography is too close to Hong Kong and lacks premium yields.

The risk in this analysis is thinking too narrowly about Australia and New Zealand competing. Their biggest competition is not with each other but the rest of the world.

Short-haul markets like Japan, Korea and Taiwan are natural and inexpensive destinations for Chinese visitors. North America and Europe are well known. Australia and especially New Zealand need to sell themselves. The UK offers a lesson: the UK competed with continental Europe by requiring Chinese visitors to have a UK-specific visa rather than the more encompassing Schengen visa that granted travel to multiple European countries. Chinese did not bother with a UK visa, simply skipping the UK. The message: countries should not see neighbours as competitors but as a potential draw. This could apply to airlines, too.

Growth of visitors from China is still in its infancy, and continued growth will necessitate airlines re-evaluating partnerships as well as the extent to which they can accept their partners' promiscuity. In the case of China's airlines, holding the key to the massive Chinese market, they are likely to be the ones to set the parameters. To date they have been much less fastidious about observing partnership principles established by the long established international airlines.