While China is sometimes seen a promised land with endless growth for aviation, it is a divergent story. Beijing Capital Airport grew passenger volumes by only 2.2% in 2013 compared to 3.4% at London Heathrow, the much-bemoaned constrained airport. The eastern coastal part of China accounts for the majority of travel, with 70% of 2013's 754 million passengers flying in the region. But this share is gradually falling; in 2006 73.2% of passengers flew in the eastern regions.

It is western provinces and the northeast that are taking market share, albeit slowly. It is these provinces that are seeing rising GDP and are home to some of China's fastest growing airports, such as Guiyang and Kunming. While the growth presents opportunities for domestic and foreign airlines, it presents challenges as flights are often not profitable. KLM's extensive secondary airport network in China is not profitable and the carrier does not see short-term changes. West Air, based in Chongqing, is transitioning to a LCC model in the hope that a leaner cost base makes it more sustainable. Airports often put out subsidies, effectively buying growth.

Chinese airports handled 754 million passengers in 2013; the majority still on the east coast

Slowing growth was inevitable but is arriving earlier than expected, upsetting plans in the controlled aviation environment. While double-digit growth from a high base is enviable, China's aviation ecosystem is struggling to adjust to the slowing growth. This is largely due to aircraft deliveries not slowing down, creating an excess amount of supply.

The eastern and central south regions, which respectively include the mega hubs of Shanghai and Guangzhou, continue to handle the most amount of traffic. The geographically smaller northern region, which encompasses Beijing (the world's second largest airport), handled the third largest amount of passengers in 2013. 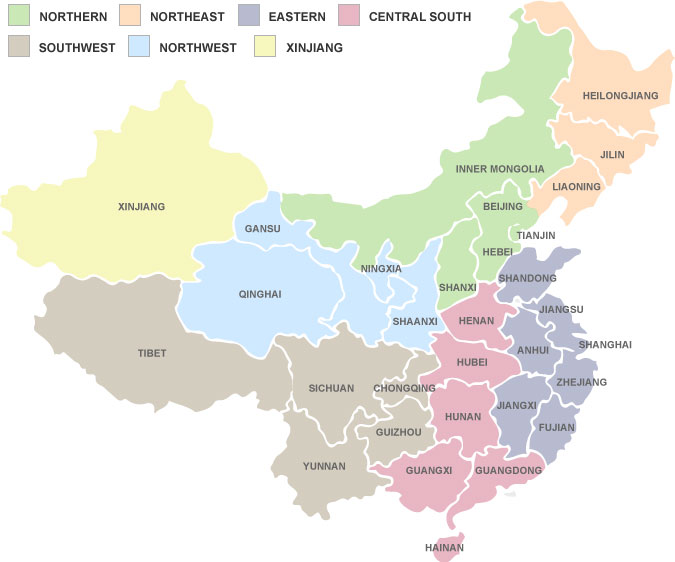 These three regions (northern, northeast and eastern) collectively handled 70% of passenger volume in 2013. 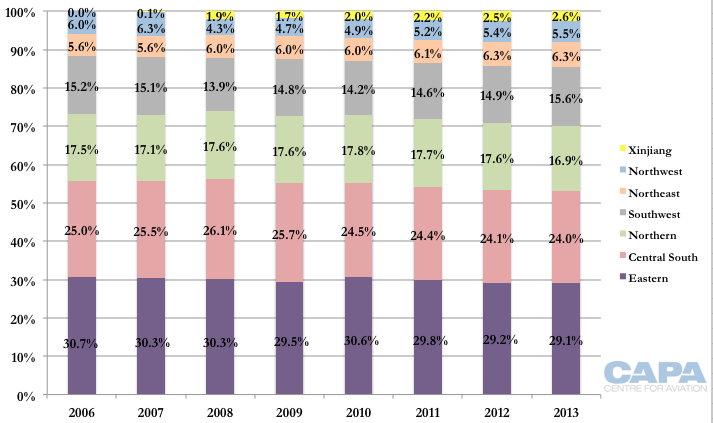 Grouping these three regions into one shows their share of traffic has gradually declined from 73.2% in 2006. Of course, given the voluminous growth of the market, the regions carried more passengers in 2013 than 2006. 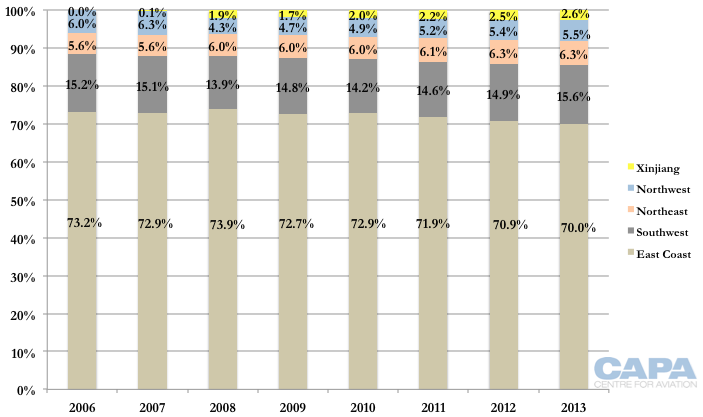 Chengdu is China's fifth largest airport and grew a moderate 5.9% in 2013. Nearby Chongqing however grew at a much faster 14.6%.

Kunming was the fastest growing airport in China in 2013 with 23.9% growth thanks to a new airport and additional slots. This shift in direction of growth is a common domestic market trend as commented on by Adam Pilarski of AVITAS, speaking at the recent ISTAT Asia conference. Mr Pilarski noted the US experienced a similar "Go West" shift with the US west coast increasing its share of capacity while in another geographically large domestic market, Russia, the shift was from west to east (into Siberia).

Beginning in the mid 2000s this shifted, with coastal-inland capacity accounting for 50% of system capacity while intra-coastal capacity is down to less than 40% – a drop from the 80% figures of the 1970s. However it should be noted again that this is share; absolute growth has been tremendously large.

This is a reflection of GDP growth and population: the coastal area comprises under 21% of China's total landmass while accounting for about two-thirds of its population.

Not to be forgotten in this westward shift is the smaller activity in China's northeast. Once a rustbelt region, reform is seeing it receive the largest FDI, with accompanying sharp increases in passenger traffic. Northeast airports such as Shenyang and Harbin were among the fastest growing airports in 2013.

Passenger volumes and year-on-year growth of airports in China with over 10m annual passengers: 2013 Chinese airlines – and the government – hope the LCC model will spur growth in western regions. But it is not all that easy

China's recent announcement of plans to embrace the LCC model was partially pinned on stimulating growth, especially in the country's west. There were overtures that the government was expecting new airlines and LCCs to take up the challenge in the west, but so far most of China's 15 new carriers are in the more populous areas. This includes LCC Jiu Yuan/9 Air, to be based in Guangzhou – China's second largest airport. China Eastern plans to convert Beijing Nanyuan-based subsidiary China United Airlines into a LCC.

See related report: 15 new passenger airlines to launch in China. Though small in size, they will rattle the status quo

However, while the new airline and LCC activity is concentrated in the east, there are efforts under way in the west. HNA's China West Air based in Chongqing has already converted to the LCC model; also, Chongqing Airlines will reportedly change to the LCC model. Airlines hope the leaner cost base of a LCC will be more commensurate with the lower GDP of western regions and so enable greater sustainability. But regardless of where new airlines launch, they face challenges finding a spot in China's aviation ecosystem which so heavily favours the state-owned carriers. Route access and aircraft imports are challenges, although the CAAC hopes to loosen the restrictions.

LCCs face additional hurdles as the CAAC has to change regulations to suit the low-cost model. For example, only at the end of 2013 did the CAAC abolish a rule requiring a minimum fare. This rule prevented the low priced tickets that LCCs in other markets use for promotions. There are many remaining practices that await reform, especially in the critical ancillary revenue area.

International flights are growing in number, but not profitability; subsidies abound

The challenges for international carriers serving secondary Chinese cities are smaller but higher in risk – or at least for long-haul carriers. Asian carriers are increasingly finding success in secondary cities as China's main markets become over competitive. For long-haul carriers, service to secondary Chinese cities is typically dependent on a subsidy, but often the routes are still not profitable. KLM, for example, sees its secondary city network as strategic for relationships with airline partners and various Chinese political branches.

Air France also closed reservations on its Paris CDG-Wuhan service but then re-opened it. The rift was reportedly due to negotiations over the route's subsidy, reported by Le Figaro as EUR30,000 per flight – a high sum. Chengdu, which has attracted British Airways, Qatar Airways and United Airlines, amongst others, is known for its large subsidy programmes.

Long-haul services from secondary cities are also challenging for China's own airlines. Chengdu-based Sichuan Airlines has experienced weak performance on its Melbourne route but nonetheless – and at the direction of its state shareholders – launched Sydney. Xiamen Airlines is not overly optimistic about long-haul prospects; the carrier takes delivery of 787s shortly.

Growth is occurring too fast in China overall and in secondary and tertiary regions, depending on the viewpoint. From a pure profit/loss objective, the pace of expansion is too fast. Some less bullish foreign carriers do not expect long-haul service to secondary cities to be regularly profitable without subsidies until the end of the decade. But taking a holistic view results in a different conclusion.

A small loss per passenger can result in economic gains many times that loss. There are thresholds, however, and EUR30,000 per flight – as reported in Air France's case – does seem high.

The more challenging work is for China's airlines. Among a changing aviation landscape they must find a way to serve growth regions sustainably. The CAAC's embrace of the LCC model brings opportunities, with more to come pending further reforms, but also the challenge of greater competition.