This is the second part of a report looking at China Southern's A380 operation. While the carrier waits for all interested parties to sign off on its Beijing-Paris joint operation with rival Air China, it still has three A380s currently on domestic routes for which it needs to find suitable long-haul services.

Long-haul routes to Frankfurt and New York would be most viable for China Southern's A380, but would probably require cooperation with Air China if to be served out of the preferred hub of Beijing. China Southern has casually floated the idea of A380 services to London and Sydney, but deployment there would face spool-up challenges.

Local reports ahead of China Southern's FY2012 disclosure in Mar-2013 indicate the losses from the airline's A380 operation are between RMB150-200 million (USD24-32 million). China Southern said A380 losses in 1H2012 were less than RMB100 million (USD16 million). Further losses in 2H2012 are unsurprising as the aircraft have primarily remained in the domestic market with the exception of cancelling a return daily Beijing-Hong Kong service and launching the A380 on a daily Guangzhou-Los Angeles service, replacing a 777-200 in late Oct-2012, more than halfway through the second half and thus limiting time to improve financial performance.

But the degree of losses is troublesome and underscores how China Southern must move the aircraft into long-haul markets. The second half is the stronger portion by far for Chinese carriers, so the losses in 2H2012 are the more worrying. Some allowance could be made as Chinese carriers experienced a slow end to 2012 in the lead up to the Nov-2012 leadership changeover, as business traffic slowed sharply. 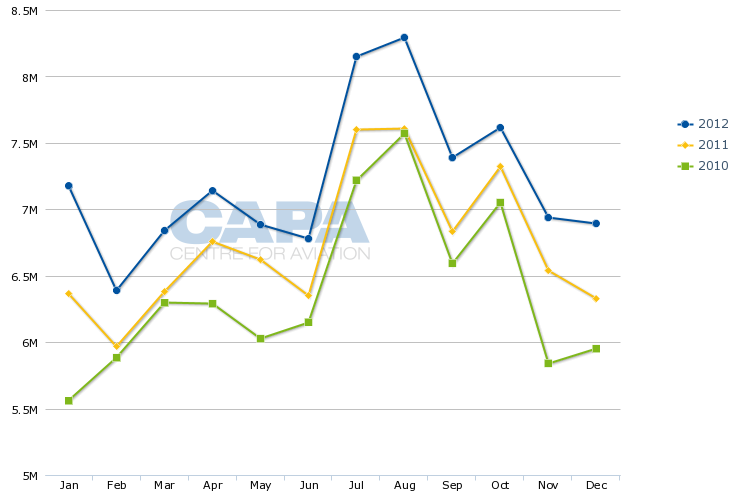 The withdrawal of Beijing-Hong Kong services was positive as China Southern indicated losses on that route were higher than its domestic A380 services from Guangzhou to Beijing Capital and Shanghai Pudong. China Southern's A380 operation to Hong Kong was an ill fit, further demonstrated when the carrier ultimately down-gauged the route from a 506-seat A380 to an approximately 180-seat A321.

The losses are reflective of China Southern's position in those markets. Guangzhou is China Southern's hub and benefits from connecting domestic and international traffic, unlike Hong Kong. While China Southern has a large presence at Beijing, most services are to southern points that would entail significant backtracking if reached from Hong Kong via Beijing.

Frequency and schedules were also factors. China Southern's single daily A380 service between Hong Kong and Beijing is its only offering between the two cities, limiting passengers who wanted other departures times and had variety to choose from. Air China has six daily flights between Hong Kong and Beijing, Cathay Pacific and Dragonair typically have nine, and Hong Kong Airlines/Express three. When considering Hong Kong Airlines and Hong Kong Express as one marketing carrier, China Southern also had the lowest capacity measured in seats.

Between Guangzhou and Beijing, in addition to China Southern's two daily A380 services, it also offers upwards of 10 other services, giving a wealth of options to complement its already strong position.

While economy class may sell well, the premium cabins do not. The additional stress on the frames and low-hour, high-cycle accumulation further impacts the operation's bottom line. 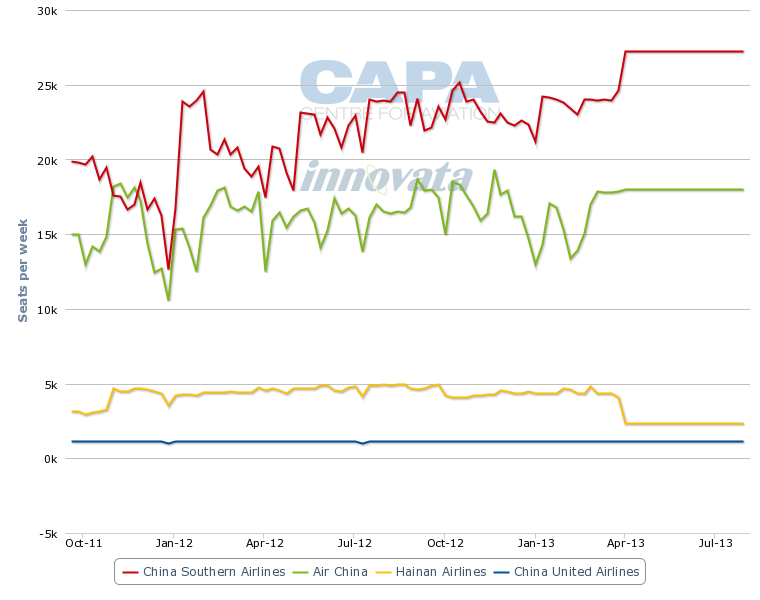 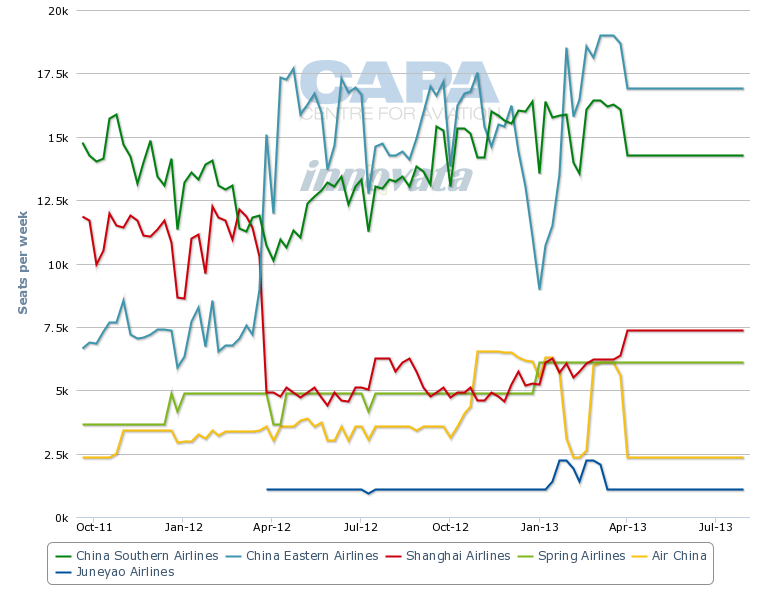 China Southern's A380 block hour utilisation rate in Feb-2013 is 11.4 hours, lower than the 13.7 hours regional peer Cathay Pacific got out of its 747-400s or 15.7 hours from 777-300ERs in FY2011, the latest data available. However Cathay has a scale advantage with over 20 of each 747-400s and 777-300ERs. China Southern's utilisation rate will fall with the Feb-2013 delivery of its fifth and final A380, assuming the fifth aircraft is kept on domestic routes and no new long-haul routes are opened. Shifting the A380 fleet to operating three daily long-haul sectors (China Southern's intent) would boost average utilisation by a few hours, depending on final route selection.

At the same time as Beijing-Paris cooperation drags on, China Southern is understood to be seeking more markets for its A380s. An A380 delivery in Feb-2013 will bring its fleet to the five frames it has ordered. Guangzhou-Los Angeles requires under 1.5 frames while Beijing-Paris would also require under 1.5 frames. (For now Chinese carriers tend to have shorter intercontinental layovers than peers, which maximises utilisation but at the expense of some connecting opportunities.)

If Beijing-Paris goes ahead, China Southern would likely seek another long-haul service requiring 1-1.5 frames (total usage: 4-4.5 frames) and then have an operational spare.

China Southern will likely target Frankfurt and New York services from Beijing, but these will probably fall under the same contention with Air China as Beijing-Paris. There could be less concern from global alliances, especially on a possible New York service. China Southern has no passenger services to Frankfurt or New York. China Southern's European network includes Amsterdam, Istanbul, London, Moscow and Paris while its North American network consists only of Los Angeles and Vancouver. Expansion is likely with its forthcoming fleet of 777-300ERs.

Air China has been favouring frequency upgrades, announcing in Jan-2013 upwards of double daily service to New York JFK, allowing it to tap additional scheduling banks and facilitate better connections. As with the concern of drastically increasing capacity to Paris with China Southern's A380, any Air China-China Southern A380 joint operation would cause Air China to re-evaluate its preference for frequency. 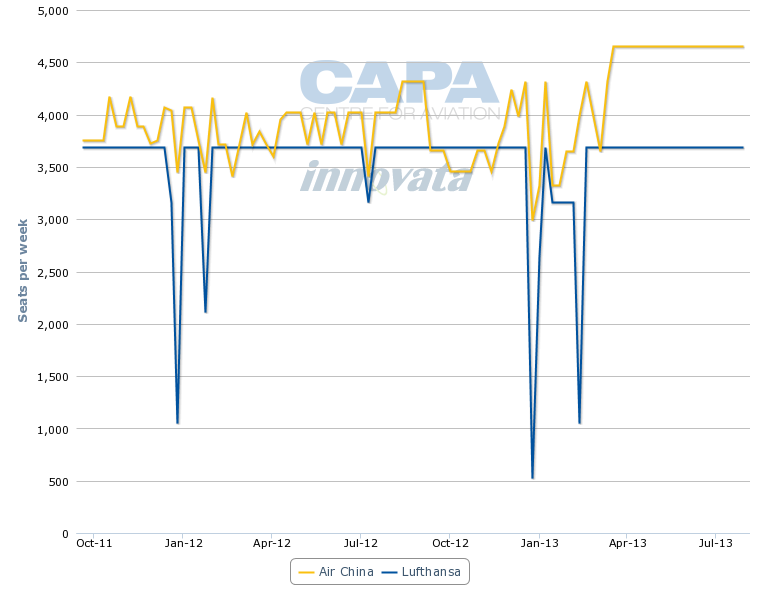 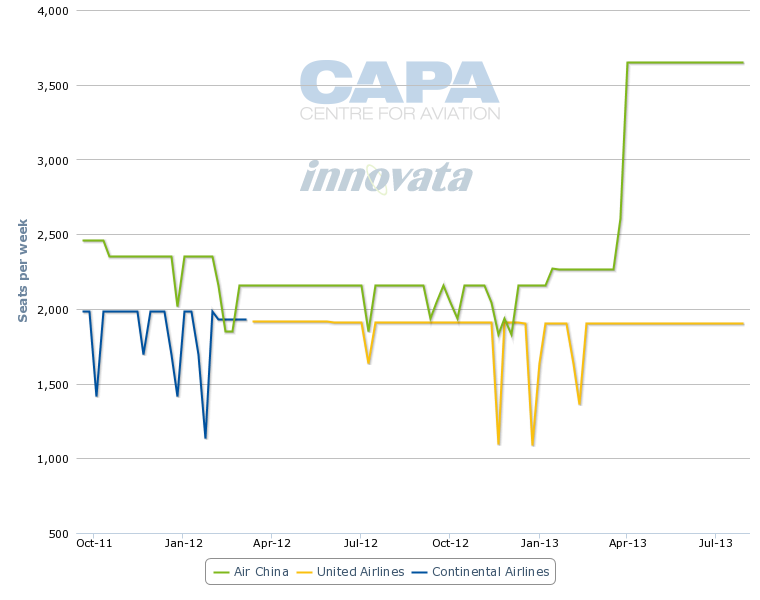 Beijing would be the preferred hub for China Southern's A380s. China Southern has previously floated it could serve London or Sydney with A380s, but these would be last-resort options. China Southern launched London only in 2012 but dropped service from daily to five weekly over the northern winter 2012/13 and subsequently extended the frequency cut from Mar-2013 to Jun-2013, indicating China Southern has significant work ahead to spool the service up, let alone increase capacity from a 217-seat A330-200 to 506-seat A380s– more than double the capacity.

Sydney would face similar imbalances although Tourism Australia has been advocating introduction of the A380.  Over the northern winter/southern summer 2012/13 China Southern is operating double daily A330 services to Sydney. This later shifts to an A330 and 777-200. China Southern in recent years, as it added large amounts of capacity, has had to pull back on Australian service during off-peak periods, and has often extended the period of cuts or further reduced frequency after initial changes, indicating there is still fine tuning and learning of the market.

While China Southern on a sheer seat number basis could consolidate double daily A330 flights to an A380 (and still have growth), this would lose a frequency advantage China Southern is trying to build as it further builds its Guangzhou hub, which has varying departure banks and so requires feed at different times of the day. Greater frequencies also give greater convenience and allow China Southern to compete with sixth freedom peers: at Sydney, Cathay Pacific has four daily flights (and would likely increase this if the bilateral permitted), Emirates three, MAS two, SIA four and Thai about two (12x weekly). MAS and Thai have expressed reservations about deploying their A380s to Sydney in light of what is seen as a capacity imbalance.

For China Southern to add a third Sydney frequency on the A380 or replace an existing service with the A380 would require that traffic to have connecting opportunities once in Guangzhou, adding further burden to China Southern's growing pains. 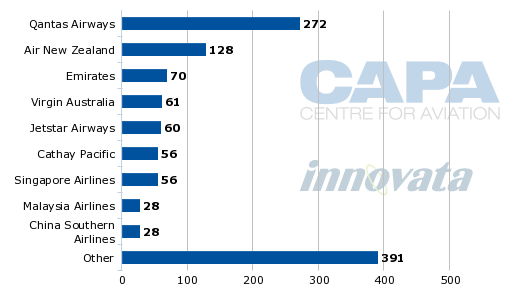 The A380 has clearly proved itself with other operators; the aircraft is not the real issue here. Whether China Southern should have waited to acquire the aircraft at a time when there would be better scale from Guangzhou or a more liberalised operating environment, or if another Chinese carrier should have ordered the aircraft instead, is another matter.

For now, China Southern must do what it can to move the aircraft into more viable long-haul markets, as challenging as this may be.

So far, Beijing is not being helpful and is finding that the complexities of global partnerships make unilateral decision making (for example requiring China Southern to operate the A380 jointly with Air China, across alliance lines) increasingly difficult. As China's airlines expand into international markets, at the urging of the government, the often unwelcome need to cooperate more effectively with foreign partners grows more necessary. Such are the realities of a commercial international marketplace and Beijing will not be slow to recognise that. If it means compromising on domestic priorities, like favouring Air China, something will have to give.