China Southern Airlines on 11-Jul-2014 projected a rare first half net loss of RMB0.9-1.1 billion (USD145-177 million). This adds to growing weak performance in Asia's airline sector. With China sneezing, is the rest of Asia in for a cold? While there may be more declining performances across greater China and broader Asia, they are not inherently linked. Thai Airways is suffering from its national political environment and Malaysia Airlines from weakened traffic following its MH370 tragedy (which even Singapore Airlines is feeling as Chinese tourists avoid Southeast Asia).

China Southern's challenges are equally nuanced. While shifting exchange rates continue to impact the carrier, its core business has been caught in China's economic re-ordering. Economic growth is slowing but China Southern is having to adhere to state-led capacity growth plans established when the economy was stronger. China Southern has been unable to revise capacity at its discretion, resulting in over-supply that is causing load factors and yields to decline. A net 1H2014 loss follows 1H2013's net profit but operating loss, further highlighting shakiness.

China Southern is Asia's largest airline and the largest in the domestic market. China Southern in the first five months of 2014 had 42% more domestic ASKs than China Eastern and more than double that of Air China (airline). 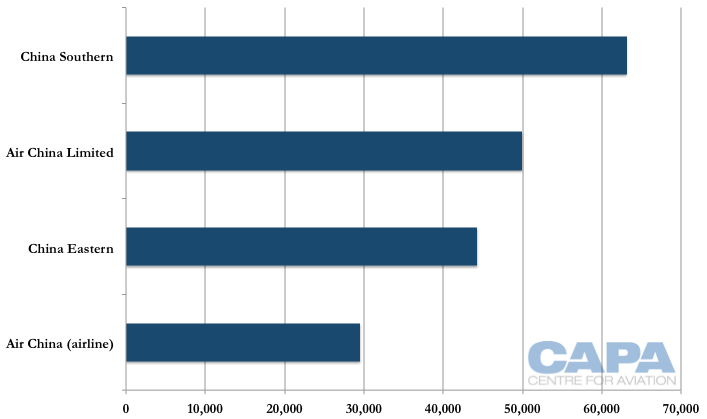 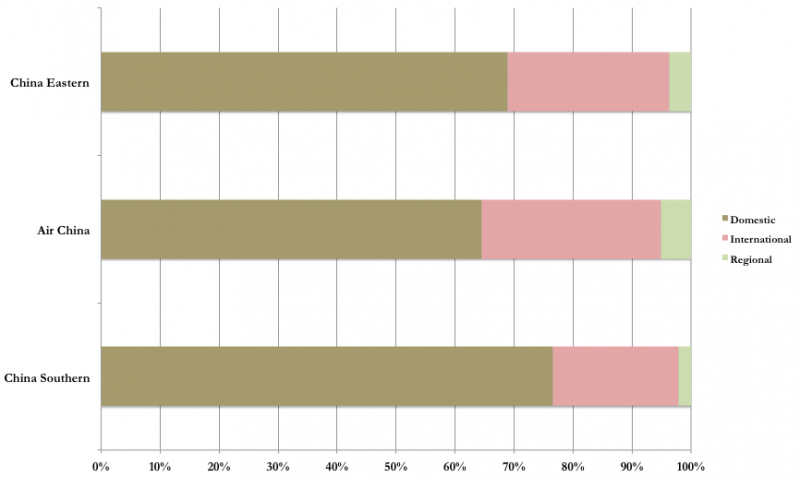 China Southern's domestic exposure makes it a favourite for investors, as China Southern effectively becomes a proxy for the domestic market's strength.

In a filing to the Hong Kong stock exchange on 11-Jul-2014, China Southern attributed its projected net loss due to the yuan's depreciation and "the slower growth of Chinese economy". For the latter, the slowing Chinese economy is a factor, but more directly the problem has been Chinese carriers' inability to respond to the slowing economy.

Whereas airlines in other markets would cut capacity and even defer aircraft, state-run carriers have limited say, their capacity output largely driven by the state in five-year plans, the last of which was drafted when economic conditions were more robust. The economic growth forecast was tightly linked to Chinese carriers' growth plans, but now despite the older, higher economic growth projections being reduced, airline capacity is difficult to adjust, a condition that state-run carriers bemoan.

China Eastern and China Southern have released traffic figures through Jun-2014, but Air China only through May-2014. 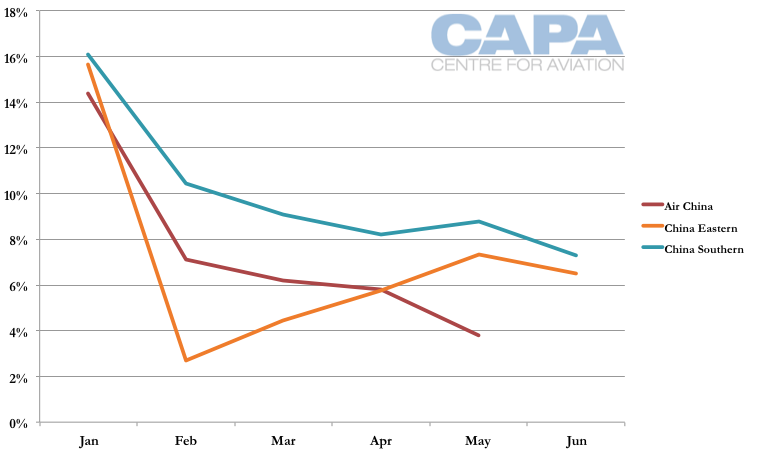 Load factors improved in Jan-2014 and Feb-2014 during the extremely popular (Lunar) New Year travelling season. But for the rest of the first half, performance was up and down. One cautiously upbeat note is Air China reporting higher load factor growth in May-2014 than Apr-2014.

China Eastern and China Southern experienced month-on-month declines. Many carriers were surprised by the weak performance of Jun-2014, suggesting that interest in watching World Cup games possibly impacted the inclination to travel domestically. 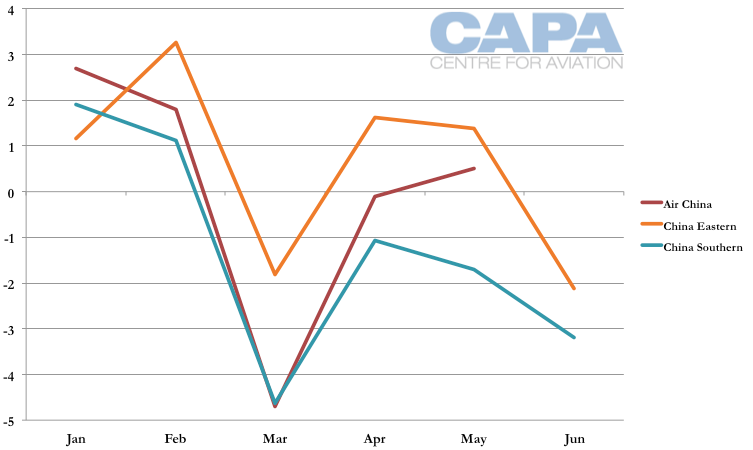 It is yields where the blood shows, meaning that airlines have heavily discounted tickets in order to absorb capacity at similar load factor levels. Yield information for 2014 is not yet available for the carriers, but previous months probably point the direction. In 2013, China Southern's domestic yields declined by 11.6%, a level the carrier minced no words about by describing yields as having "deteriorated".

Some of this decline is offset by a change in tax accounting, but only partially. Air China's yields declined by 10% while China Eastern suffered a decline in domestic yields of 7.3% – an amount made more extreme considering China Eastern was not impacted by the accounting change in 2013. 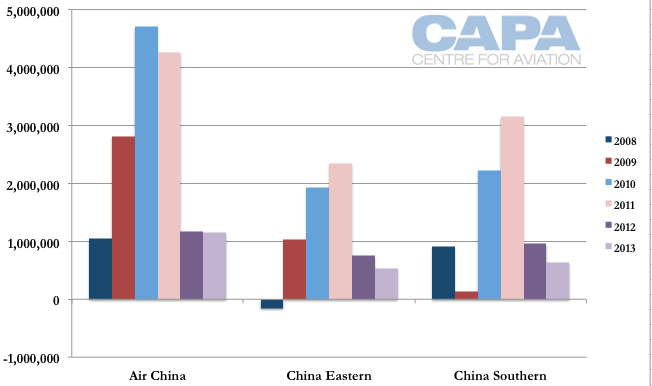 In announcing its profit warning China Southern did not state what its operating result would be.

Poorer operating results have been more common, with China Southern incurring one in 1H2013. All three of the "Big 3" incurred operating losses in 1H2008. 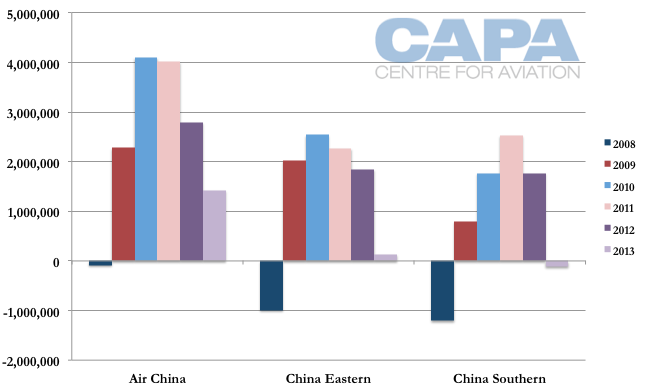 A bright outlook remains, but there is work to be done

China Southern's profit warning comes amid some gloom in Asian aviation, from aircraft deferrals to financial losses. But in China the fundamentals remain strong even if the short term poses large strategic questions. One such question is how airlines will adjust to weakened premium demand that is likely here to stay, and was never particularly strong to begin with. China Southern's premium load factor in 2013 was under 50%; more seats flew empty than filled. And then of course there are the new airlines – with high ambition – being ushered in under China's reforms.

One of the few LCC start-ups is Jiu Yuan/9 Air, which plans to call Guangzhou home, delivering China Southern direct LCC competition in its home base. 9 Air will be a fraction of China Southern's size and will face its own challenges, but on overlapping routes China Southern will feel pressure, and this will build as competition increases.

China Southern's long-haul network is little changed from the status quo. Management has flagged slowing growth while looking to mature the network, possibly via partnerships. China Southern's A380s remain under-utilised with a high loss contribution while a new 777-300ER long-haul flight to New York JFK to be launched in Aug-2014 comes amid high growth in the US east coast. Although only one flight, and less than daily, it will be the longest in China Southern's network.

Long-term opportunity however does not excuse short-term action. Some factors, including big ones, are beyond management's control. Although it is not difficult to see a bright future for China Southern, there could first be more pain for China Southern and peers.