There is no mistaking the political tension from China in creating a special holiday, with full military parade, on 03-Sep-2015 to commemorate “The 70th anniversary of Chinese People’s Anti-Japanese War”. Relations between Japan and China have been sour, including in late 2012 when air traffic quickly dissipated. But despite what the special holiday’s name may suggest, Japan and China’s aeropolitical relations are at their strongest in recent times.

China has granted approval for more services from prized Tokyo Haneda that were agreed upon some years ago but not implemented due to frosty relations. But Haneda is a small part of the growth between China and Japan.

Chinese visitors to Japan have doubled in 2015, and four new Chinese airlines launched Japanese service in 2014 and 2015. 34 Chinese cities have service to Japan in 2015, up from 16 in 2010. Most growth has occurred from Shanghai, with LCC Spring Airlines adding as many seats as China Eastern. Spring now has a 7% share of the China-Japan market.

Relations between Japan and China may still be weak, but they are better than in the past, such as around 2012 when there was Chinese nationalism to boycott Japan. China even had travel agencies, which account for larger group bookings, de-emphasised Japanese travel. Spring Airlines received a Chinese public backlash when it advertised heavily discounted Japanese flights during the peak of the traffic downturn; it was labeled unpatriotic.

The geopolitical fundamentals have not changed – there are still disputes, perhaps even heightened, over islands and wartime apologies. But Chinese consumers now do not think twice about visiting Japan and snapping up rice cookers and cosmetics, all thought to be of higher quality than Chinese versions.

Before the busy 2015 lunar new year travelling season, one of China’s state newspapers ran an editorial encouraging Chinese to limit their purchases in Japan and instead buy at home to support the local economy; it fell on deaf ears. Chinese visitors to Japan have more than doubled in the first six months of 2015 compared to 2014. 2014 was already a record year for Chinese arrivals into Japan. Source: CAPA - Centre for Aviation and tourism agencies
Note: Australia is for 5M2014/5M2015 only 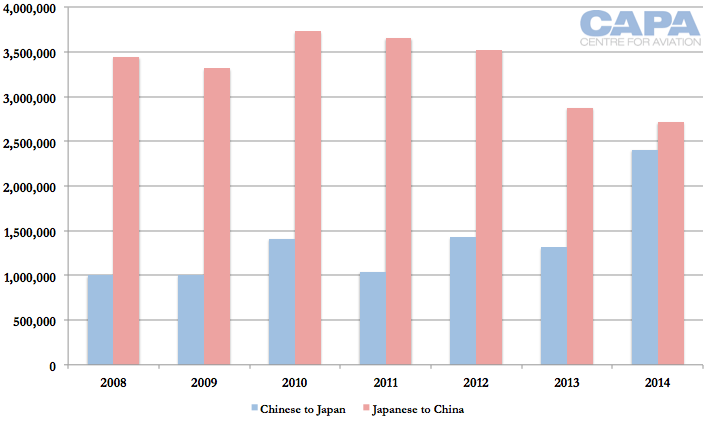 The China-Japan market in 2014 rebounded from the 2012 slump following territorial disputes between China and Japan that saw traffic decrease. 2015 capacity levels show growth beyond what was reached during the GFC.

2016 capacity will reach a new high as the additional capacity injected in 2015 will not see a full-year realisation until 2016. And, of course, there are expectations for strong growth beyond the current supply. 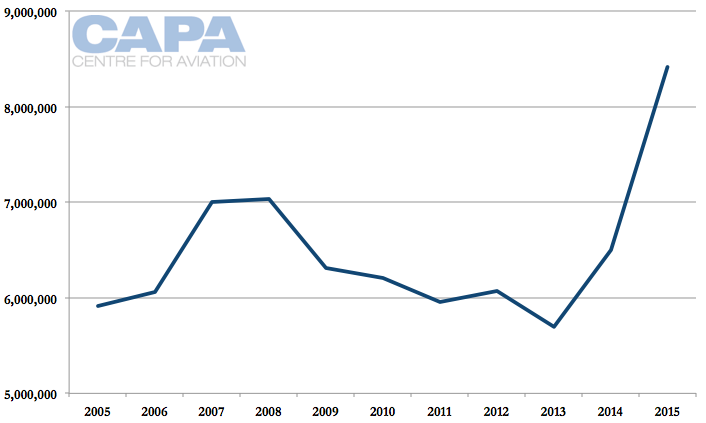 Chinese airlines dominate the China-Japan market. As noted above, in 2014 there were more Japanese visitors to China than Chinese to Japan, but this is rapidly changing with Japan’s tourism influx.

Timeline of Chinese carrier entry into the Japanese market: 2005-2015 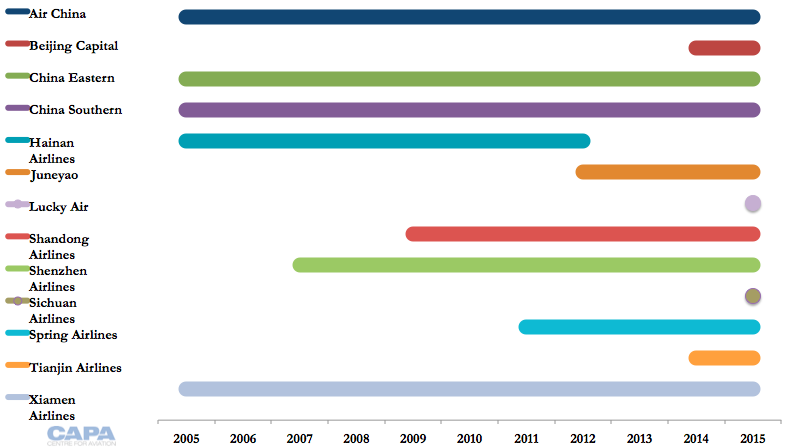 With additional operators, the market has become fragmented. In 2010, five carriers – China Eastern, Air China, ANA, JAL and China Southern – accounted for 91% of available non-stop seat capacity. The four largest were close to each other, with approximately 18-22% capacity each.

In 2015, the five largest carriers account for 80% of seat capacity between China and Japan. China Eastern, ANA and Air China have maintained capacity shares of about 20% but JAL now only has 12% of the market while China Southern has about 8%.

Spring Airlines, the only LCC flying between China and Japan, has quickly grown to capture 7% of the market and is now the sixth largest carrier in the market.

Juneyao holds about 3% of the market and is the largest after Spring. Like Spring Airlines, Juneyao Airlines is privately-owned and based in Shanghai but is not low-cost.

In 2015, Chinese carriers have grown to be 67% of the market, and Japanese carriers only 30%. Japan’s decline is in marketshare and net seats, but the story diverges at ANA and JAL. JAL made large cuts during its bankruptcy re-structuring while ANA in recent years has grown.

In 2010, 21 Chinese cities had scheduled service to Japan, according to OAG data. But five of them had fewer than five flights a year, effectively making these charters with 16 Chinese cities seeing regular service. In 2015, this has jumped to 35 cities, with only one seeing token service.

A decade ago there was service from more Japanese airports to China than Chinese airports to Japan. This reflected the concentration of China’s travelling population being in only a few cities, limited business interest for Japanese companies outside of a handful of cities, and the Japanese yen making trips from China expensive.

Number of Chinese and Japanese cities and total city-pairs in China-Japan market: 2005-2015 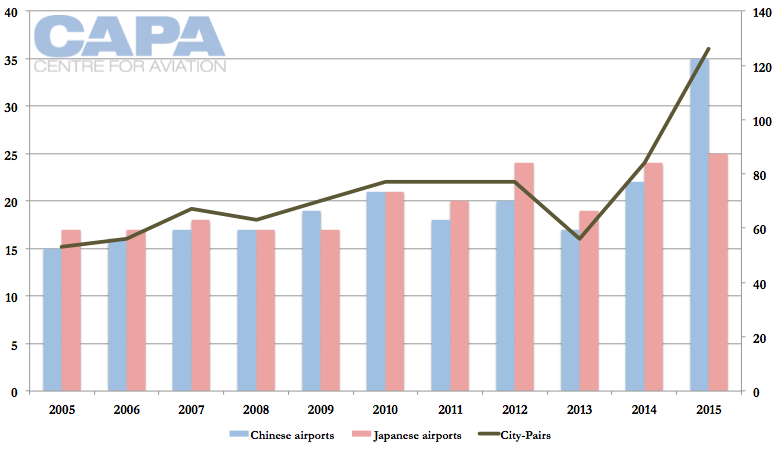 Chinese airports seeing Japanese service in 2010 were mostly along the east coast. But since then growth has shifted inland, supported by handsome subsidiaries for new routes.

Chengdu in western China has received official status as being a major gateway along with Beijing, Guangzhou and Shanghai. Yet in 2010 it had no services to Japan, according to OAG data. Other rising secondary hubs like Chongqing, Wuhan and Xi’an also did not have service in 2010 but do in 2015, although flights are less than two a day compared to Shanghai’s 60. 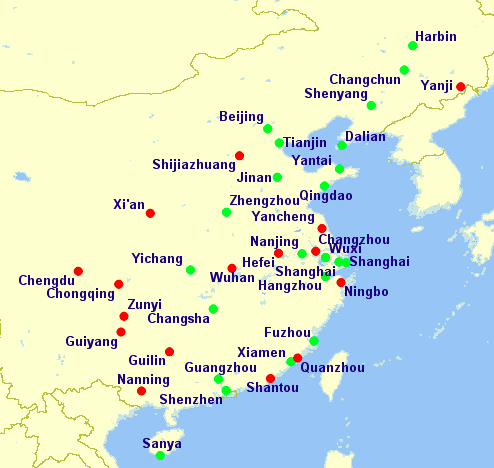 Source: CAPA - Centre for Aviation, OAG and Great Circle Mapper
Note: Sanya and Yichang had service in 2010 but not 2015

Shanghai has seen the most growth

Market growth has introduced new city-pairs and carriers, but there has been limited change in the largest markets. Shanghai is still home to half of all seats departing China for Japan.

The five largest Chinese cities for service to China remain unchanged in their order. But Beijing, Dalian and Guangzhou have lost marketshare. This is due to limited slots at Beijing and Guangzhou, and the introduction of new hubs (Chengdu) and services that bypass hubs.

Overall the 10 largest Chinese cities for Japanese service is unchanged between 2010 and 2015 with the exception of Chengdu in 2015 replacing Fuzhou.

Shanghai has commanded its position due to growth: between 2010 and 2015, half of all new seats in the China-Japan market went from Shanghai. The next largest, Tianjin, comprised only 6% of additional seats.

Beijing was the seventh largest city for growth and comprised 3% of growth. If the ranking of the 10 largest Chinese airports seeing Japanese service is dominated by well-known and long-established cities, the ranking of the cities now contributing growth is more characterised by emerging hubs. 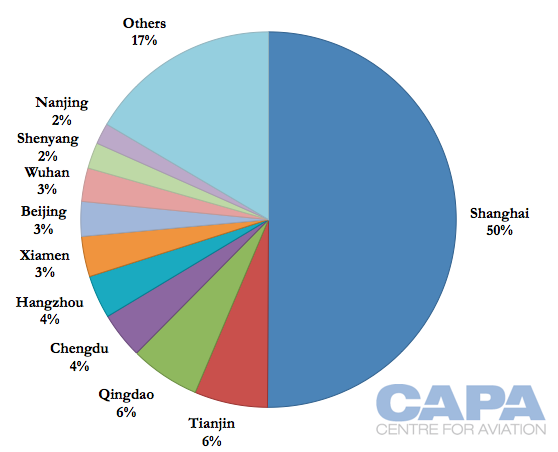 Japan is Spring Airlines' largest international market and the Chinese carrier is planning to open bases at Osaka Kansai and Nagoya. This is in addition to planned Japan-China services from JV carrier Spring Airlines Japan, which is based at Tokyo Narita and expected to serve the China market from Tokyo, a popular destination Spring has regulatory trouble accessing.

The market will continue to shift towards Chinese airlines. ANA and JAL foresee limited growth.

This is in contrast to most other Asian nations. Korea enjoys similar geography to Japan and is also experiencing a tourism boom. Korean Air and Asiana are the second and third largest foreign airlines in China (after Dragonair) while ANA is fourth and JAL is 12th. United Airlines has more seats to China than JAL does.

The Japan-China market has wide variation: Chinese airlines have some of the lowest cost bases in Asia while Japanese the highest. ANA and JAL are also more yield-driven, making them reluctant to launch services in thinner markets.

ANA and JAL see potential China growth in two areas. First is when they can secure more access from Tokyo Haneda airport. The capital’s short distance from the city allows the carriers to command a hefty yield premium. This is mostly from Japanese passengers who already pay a premium to fly on a Japanese airline. Potential new China services from Haneda will be mostly local traffic with Japanese nationals comprising the majority.

New Narita-China routes could see North American connections comprise half or more of the passengers. The balance could be tilted towards Chinese passengers, with this overall composition generating much lower revenue than Haneda services but necessary to support long-haul growth.

ANA and JAL continue to see North America as their key growth opportunity. ANA's most recent all-new China service was Tokyo Narita-Chengdu, which was launched in 2011. JAL has seen its share of the China-Japan market shrink but is growing closer to codeshare partners China Eastern and China Southern.

Chinese flight growth at Tokyo Haneda airport is an indication aeropolitical relations are warming. ANA and JAL each received day time slots for China services during the last round of international slot allocation for Tokyo Haneda. Those slots have been used for other services while the airlines waited for final Chinese approval, which occurred in summer 2015. The changes effectively give ANA and JAL a similar presence on key routes.

In the Tokyo-Shanghai market ANA currently has three daily flights from Narita to Pudong and one daily flight from Haneda to Hongqiao. It appears Japan was unsuccessful in obtaining further access to Hongqiao, which is far closer to the city than Shanghai Pudong.

JAL is also adding service from Tokyo Haneda to Shanghai Pudong and Guangzhou. Like ANA, JAL currently is limited to two Haneda-China flights including one to Beijing and one to Shanghai Hongqiao.

The new Haneda-China flights for ANA and JAL were predictable. More of a surprise – even to the airlines themselves – was the granting of midnight hour slots at Tokyo Haneda to Juneyao and Spring Airlines.

Juneyao will initially operate three weekly flights and Spring four, but they will certainly look to go beyond that. Daytime Haneda slots will be some years away for them, but they will surely continue to push for Tokyo Narita access; the holdup is on China protecting incumbents.

Spring Airlines Japan aims to be a significant player in the China-Japan market, as well as other ex-Japan markets. But growth momentum in the medium-term may shift to China's growing number of new LCCs. Full-service Chinese airlines will continue to drive growth in the short-term, with Japanese carriers having targeted growth.

China's new LCCs are still transitioning to being LCC and exploring what exactly that means and necessitates of them. They are some years away from being like Spring Airlines, but international services are on their horizon, and the short distances between Japan and China combined with high demand make Japan a strong growth option for them. This will be a further challenge to the Chinese full-service carriers that have relied on Japan as one of their highest-yielding markets.

If domestic slots prove too difficult to obtain, China's new LCCs may place growth emphasis on international markets, as Spring is now doing. It could be rising LCC competition on international, not domestic, markets that forces change at the incumbents.