China Eastern’s first-half passenger numbers jumped 45% to 30.1 million, with the carrier making a CNY155.6 million (USD23 million) currency gain after the stronger yuan pared the value of dollar-denominated debts associated with the acquisition of Boeing and Airbus aircraft.  The carrier’s passenger and freight volumes also benefited from a recovering economy, which also helped boost passenger yields by 17.6% to USD 8.78 cents.

Commenting on the result, China Eastern stated: “The company considers that the global economy is gradually recovering and the foundation for performance of the PRC economy is further strengthening and contributing to the stable development of the economy. With the recovery in the demand for air transportation, the civil aviation market of the PRC is expected to grow at an accelerated pace. In the second half of 2010, the Company will grasp the favorable opportunity brought by the high season of the market as well as the Shanghai World Expo. We will optimize our market allocation, strengthen cost control and enhance our operating capability to strive for better profitability."

Shares in China Eastern fell 4.6% to HKD3.94 at the close of trading in Hong Kong on 27-Aug-2010. Shares in the company have climbed 42% this year, compared with a 49% gain for China Southern Airlines and an increase of 37% for Air China Ltd.

Hainan Airlines reported a 42% jump in revenues in the six months ended Jun-2010 to USD1.4 billion, with the carrier returning to profitability at the operating level in the period, with an operating profit of USD72 million, compared to a loss of  USD221,515 in 1H2009. Net profits increased 218% to USD81.5 million. The carrier also reported a 13% increase in passenger levels to 9.2 million in the period, with an average load factor of 81.1% (+4.1 ppts).

Also in the North Asian region, All Nippon Airways stated the delays to the B787 deliveries would have no impact on its earnings for the current business year and commented: "Given the success of the flight test programme so far, it is regrettable to hear of the delay. However, we trust that the time will be used to deliver the best possible aircraft in the shortest possible time frame."  ANA spokeswoman Megumi Tezuka stated the carrier was requesting delivery dates from Boeing as soon as possible beyond the first aircraft, which is now scheduled for delivery in Feb-2011. 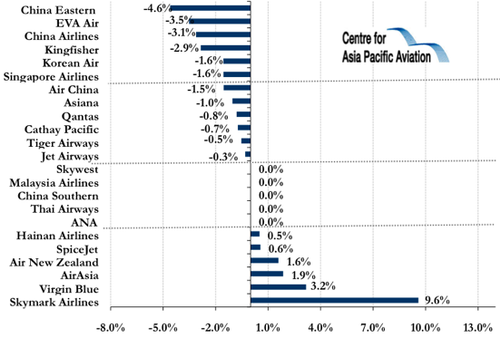