The Thai market rose 3.1% last week, its fourth straight week of gains, on optimism that the Thai economy could recover later this year. Political instability remains the wild card however.

China Eastern Airlines' shares meanwhile gained 3.8% in Hong Kong yesterday, before its half-year financial report was released. The carrier reported a profit of CNY1.0 billion, under international accounting standards, compared to loss of CNY152 million in the previous corresponding period, driven by revaluation gains from fuel hedging and improved passenger demand. China Eastern benefited from CNY1.24 billion in "non-operating income", predominantly in the form of government subsidies and reimbursements from the civil aviation infrastructure fund.

More significantly (and as a sign of what's really going on), China Eastern experienced a 17.7% year-on-year reduction in passenger yield in 1H2009, while freight yields collapsed 36.8% in the period. The carrier also reported an overall load factor result (60.5%, -2.3 ppts year-on-year) which fell slightly below the carrier’s break even load factor of 60.8% (-11.0 ppts year-on-year), as load factors across the carrier’s network were down (with the exception of regional routes), with international freight load factors the most severely affected, slumping 11.0 ppts to just 37.6%.

China Eastern concedes it expects 2009 to be the "most difficult year for the air transportation industry". The carrier added that it is more exposed to the impact of the financial crisis, as Shanghai is "more internationalised" than other cities in China. According to the carrier, “for the civil aviation industry of China, the negative growth in the international aviation market demand since the second half of last year still continues. In particular, the demand for air transportation in the markets of Europe and the US, Japan and South Korea and Hong Kong decreased drastically”.

And yet China Eastern is pushing for an even greater exposure to the loss-ridden Shanghai market. The carrier plans to actively push ahead with its acquisition of Shanghai Airlines in 2H2009. Shanghai Airlines shares slipped 1.4% yesterday as it reported a net loss of USD13.3 million and an operating loss of USD79.7 million,  compared to profits of USD1.3 million and USD13.3 million in the previous corresponding period. Shanghai Airlines' operating revenue slumped 22.5%, driven by an eye-popping 56% reduction in cargo revenues and a 10% reduction in passenger revenues.

However, in positive news for Mainland Chinese and Taiwanese carriers, Taiwan's Civil Aeronautics Administration confirmed the launch date for regular cross-Strait services as 31-Aug-09. Once the regular services are launched, airlines on both sides will operate 270 return weekly services across the Taiwan Strait, an increase from the current 108 weekly charter services.

Also gaining ground yesterday was Asiana Airlines, up 5.8%, on the strengthening Korean won against the USD, which will likely help boost demand by South Koreans to travel abroad. Korean Air gained 1.1%.

Indian airline shares, meanwhile, were lower on 10-Aug-09, with Jet Airways, Kingfisher and SpiceJet all down, by 4.5%, 1.7% and 1.1%, as local shares closed lower for a third consecutive session. Singapore Airlines and Qantas shares were also down yesterday, by 1.6% and 0.8%, respectively, while Japan Airlines' shares remained stable. 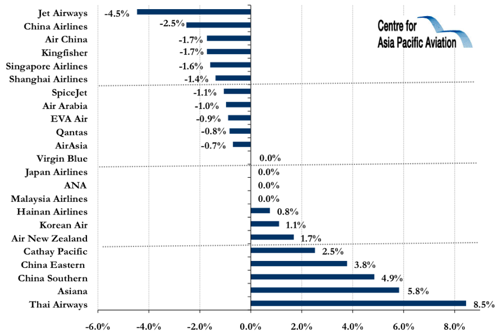