Airlines in China and India posted strong gains on the stock market to close out January. China Eastern and Air China soared 12.2% and 10%, respectively, while SpiceJet, Kingfisher and Jet Airways rose 9.0%, 6.9% and 5.4%, respectively.

Singapore Airlines was also off 2.4% as the airline took delivery of its 19th B777-300ER - the airline's 77th B777. Investors may be concerned too much capacity is entering the SIA fleet amid the downturn in demand. 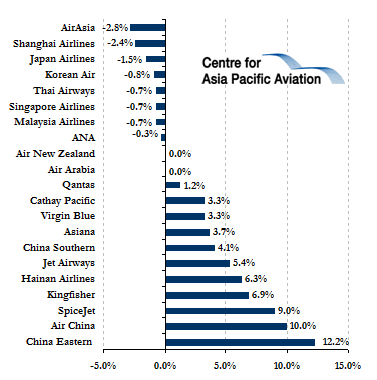