The two major Chinese carriers' share prices leapt over 40% yesterday, as they rejoined the market after periods of suspension. The exuberance was due to the substantial financial injections made by the central government, to support them through this difficult period. Whether the amounts will do any more than paper over cracks is still a question to be addresses, given the looming need for restructuring in some form.

Indian carriers all experienced a small boost, as security tensions reduced somewhat and travel advisories were relaxed. Conflicts with local agents over commission levels too are being soothed as Jet, and yesterday Kingfisher, agreed to pay 3% levels.

Otherwise, in a generally quiet market, most airline shares remained around previous levels - although Air China and Shanghai Airlines came back off some of their recent gains.

Cathay Pacific's continuing ugly outlook for premium traffic and the slump in the Hong Kong O&D market in its November report today are yet to have an impact on the carrier's share price.

Meanwhile, Oil prices rallied on 11-Dec-08 gaining USD4.46 a barrel (+10.25%) closing at USD47.98 a barrel, as the International Energy Agency predicted global growth in oil demand would resume in 2009 and the Saudi oil minister said it pumped less oil than expected last month. 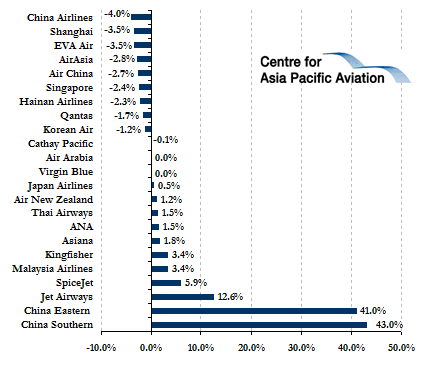