Chile recorded a solid 9.7% increase in passenger growth for the first seven months of 2016, with domestic passengers growing 9% and international passenger growth reaching nearly 11%. Although Chile has not been immune to the economic degradation in Latin America, its economy is more stable than in other countries in the region.

Some changes have taken place in Chile’s domestic market during the last year – most notably the transition of the country’s second largest domestic airline Sky into a low cost carrier. As it has undertaken a change in its business model Sky’s international passenger numbers fell for the Jan-2016 to Jul-2016 time period, but the airline is adding some international markets in 2016 and 2017, upping competition with its familiar rival, LATAM Airlines Group.

Another airline aims to start operations in Chile during early 2017 with aspirations to compete with LATAM and Sky on domestic routes. Paravai Líneas Aéreas may not pose a huge threat, but its ambitions reflect a belief that perhaps Chile’s duopoly needs to be shaken up.

Chile remains a strategic region for the LATAM Airlines Group, representing 17% of the company’s revenue by point of sale for the 12M ending Jun-2016. Chile is the group’s second largest revenue point of sale, followed by Brazil at 32%. 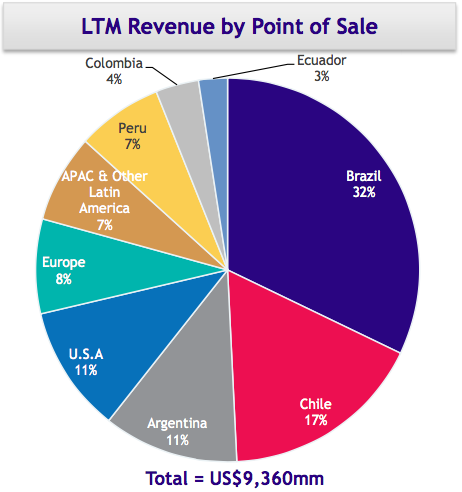 A year ago Sky Airline began its transition from a full service airline to a low cost carrier and, as previously reported by CAPA, the move appeared defensive as a means to ward off other potential ULCC start-ups in the country. Sky’s CEO stated that given Chile’s open sky policy, if the company did not adopt a full low cost business model another airline could pursue a low cost opportunity in Chile.

Indeed, at one point the Viva Group was also considering Chile, but that was during a time when Chile’s domestic market was growing more rapidly, and was perhaps more ripe for stimulation, given LAN’s dominance.

Although Chile’s economy is still growing (its GDP growth is projected at 1.6% in 2016), declining copper prices have resulted in three years of weaker economic growth, which could be a challenge as Sky works toward completing its business model transition. However, it posted solid domestic passenger growth for the first seven months of 2016.

Data from CAPA and OAG show that Sky’s domestic seats in 2016 started to grow year-on-year beginning in Jul-2016, but are still below the airline’s seat deployment in 2014 prior to its business model transition. However, recently executives from LATAM cited some competitive pressure in Chile’s domestic market in 2Q2016, and did not offer a concrete outlook for the market in 2H2016. 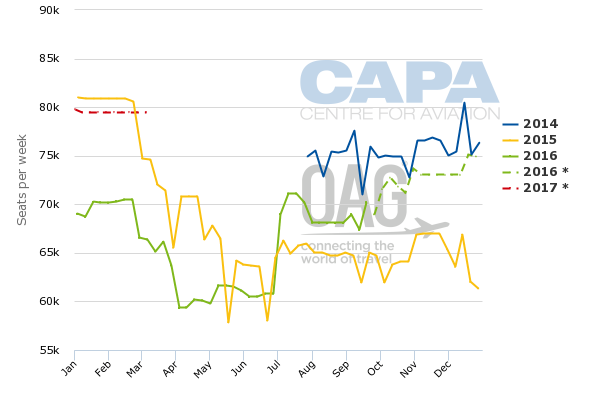 Projections from CAPA and OAG show that Chile’s domestic seats numbers are projected to grow slightly in 2H2016, which could continue to put pressure on LAN if Sky is injecting lower fares into the domestic market. 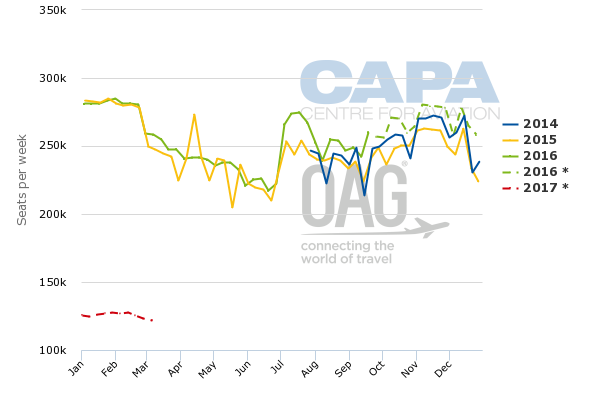 * These values are predicted future values,
Source: CAPA - Centre for Aviation and OAG

Sky’s ability to maintain its market share and grow its domestic passengers shows that Chile is responding positively to the LCC model, which entails buy-on-board food and charging for checked bags, and may require a mindset change among passengers.

Sky has altered its international network composition during the last year, dropping flights from Santiago to São Paulo, Brazil, and La Paz, Bolivia, while adding service to Córdoba, Argentina, and Montevideo, Uruguay. In early 2017 Sky plans to launch service from Santiago to Mendoza, Argentina, seizing on opportunities created by a more liberalised approach to air service adopted by Argentina’s new government.

Neighbouring Argentina is a strategic air travel market for Chile, representing the country’s largest international market measured by seat deployment. Sky is breaking LAN’s monopoly on service to both Mendoza and Córdoba – presumably injecting lower fares on routes where LAN has been dominant. 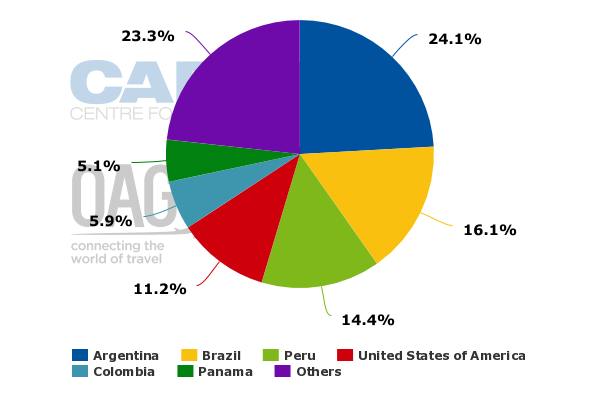 Sky and LATAM could face a new competitor in Chile, beginning in early 2017

There is the possibility of some changes in Chile’s domestic market in 2017 if the ambitions of the start-up Paravai Líneas Aéreas come to fruition. The airline bills itself as a full service carrier and plans a base at Santiago International airport. Its operating fleet is composed of two Airbus A320s, two A321s and two Boeing 777s.

Its planned domestic routes include Arica, Iquique, Calama, Antofagasta and Puerto Montt. All those routes are also served by LATAM and Sky. Paravai, part of the larger Paravai corporation, is also examining routes to North America and Europe.

Little more is known of Paravai’s ambitions, or the level of disruption it could create in Chile’s domestic market. Although Sky is undertaking a transition to a low cost airline, it has held a comfortable duopoly with LATAM for many years.

Chile’s domestic market has settled at between 9 million and 10 million passengers during the past couple of years. It is not clear if there is room for another airline in a domestic space where growth slowed to the single digits in 2014 and 2015, but Paravai obviously sees opportunities within the Chilean domestic market. 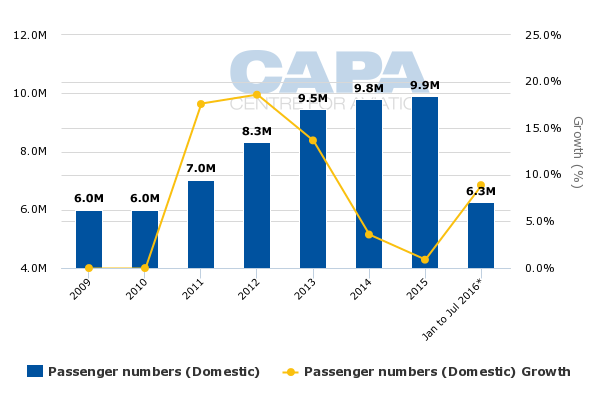 Although Brazil and Venezuela have captured most of the attention in Latin American aviation during the past couple of years, changes are also under way in Chile. Sky’s adoption of the low cost business model is am important development in a market that was previously bereft of low cost competition.

During the course of the next year Sky will determine whether it can aptly stimulate traffic in the Chilean market with the low cost model.

For now, there doesn’t appear to be a major contender waiting in the wings to disrupt Chile’s domestic monopoly. Paravai has declared its ambitions to compete with Chile’s two major airlines, but until those aspirations are delivered Sky and LATAM will maintain their stable conditions within Chile’s domestic market.