Cathay Pacific announced (08-Dec-2009) that the majority of its eligible Hong Kong-based staff will receive an average salary increase of 1.8% in 2010, but the "difficulties it has faced during the recent global economic downturn" mean Cathay is, once again, unable to pay the usual one-month’s salary bonus.

However, the airline will make an ex-gratia payment to all such employees of an amount equal to half a month’s salary or HKD8,000 (USD1,032), whichever is the greater.

Cathay Pacific CEO, Tony Tyler, added that while it "appears the worst is now over", there is still uncertainty over whether the airline’s business will recover to levels seen previously. He commented, “for that reason we will continue to manage our finances prudently and keep a very close eye on costs in order to preserve the financial health and well-being of the airline”.

Mr Tyler added the airline was still in a “vulnerable position” and although there has been a “noticeable” pick-up in business over the past couple of months, “it cannot compensate for the massive slide in business seen in the first nine months – and we still don’t know whether the current upturn will continue into next year”.

Elsewhere, it was a mixed day for airline shares in Asia. Qantas’ shares gained 0.4% and Singapore Airlines added 1.3%, while JAL retreated 2.8% and Air China dropped 4%, as the Chinese stock market dropped on profit taking. 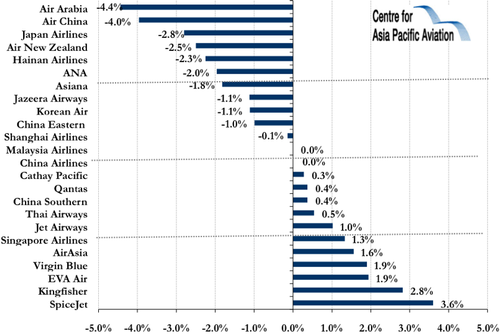