Among the challenges in the continuing weak air freight market is the role of Gulf airlines moving freight between Europe and Asia. Gulf airlines have already well proven themselves adept at moving people between many markets (some argue unprofitably so) but though their role in freight is quieter it is not without consequences.

Gulf airlines can offer dedicated freighter flights from cargo hubs to their home bases, where cargo is then transferred to lower-cost passenger belly space. European and Asian airlines typically fly freighter aircraft, with more expensive costs, over the entire journey. As a result, freighter flights between Asia and Europe have significantly decreased. Gulf airlines have bulked up freighters since 2012, in addition to doubling passenger flights to Europe and Asia since about 2010, creating ample belly space for freight.

In response to this is a growing, but still small, number of joint ventures, including Lufthansa-ANA and IAG-Qatar. Both were comfortably within Star and oneworld alliance groupings, but a recent JV formation between Star's Lufthansa and oneworld's Cathay Pacific indicates that solutions to the weak cargo market must be deeper.

Emirates, Etihad and Qatar collectively operate 46 freighter aircraft. This figure comprises 39 of their own aircraft tracked by CAPA's Fleet Database and seven aircraft (all 747s) wet-leased and reported by the companies. This only a small indication of lift capacity as it excludes belly capacity in passenger aircraft. These fleet counts now mean that Qatar Airways (as ninth largest) rises into the top 10 rank of largest widebody freighter operators, behind Cargolux's fleet of 20 and ahead of China Airlines' 18.

Freight aircraft at Emirates, Etihad and Qatar: 29-May-2016

These aircraft have mostly been used for growth (Qatar has retired A300 freighters) and have been inducted in recent years; half of the (non-wet-leased) freighter fleet has been delivered to the three Gulf airlines since 2012. 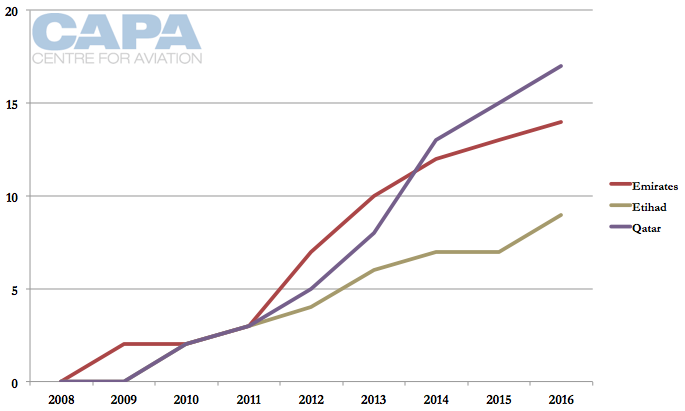 Whereas a European or Asian airline would typically carry the cargo between continents on a freighter aircraft, Gulf airlines can bring some of the cargo to their hub and then redistribute it on passenger aircraft. Belly space on passenger aircraft is significantly cheaper to operate than freighter aircraft. The flows are not exclusively from Asia: Emirates, for example, has freighter-only service to Europe's Zaragoza, Liège and Basel, among other points.

Some non-Gulf airlines operate a mini hub – such as Lufthansa in Sharjah – but none are on the same scale, and with the same combinations, as locally based airlines offer.

Depending on the operational environment and aircraft deployed, Asian and European airlines can need to apply payload restrictions on Asia-Europe flights. Gulf airlines, however, are far less likely to face payload restrictions on Asia-Middle East or Middle East-Europe routes, given the shorter sector lengths. This allows them to carry available cargo. 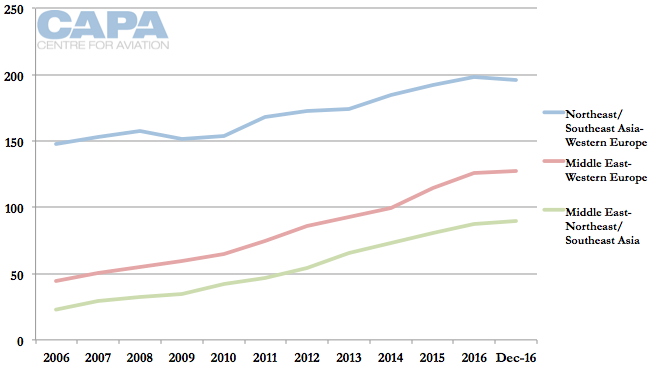 Meanwhile, nonstop flights between Western Europe and Northeast/Southeast Asia have grown 27% – from 154 daily flights in 2010 to 196 in Dec-2016. This is a lower growth figure, but from a higher base. The net addition in the nonstop market is 42 daily flights compared with 63 between Western Europe and Gulf hubs, and 43 between Gulf hubs and Northeast/Southeast Asia.

Calculating available growth in belly capacity is difficult due to operational nuances, but in short – this is significant growth. There is further growth when aircraft replacement is considered: new widebodies have more belly capacity than the aircraft they replace.

The theoretical belly capacity on nonstop Western Europe-Northeast/Southeast Asia flights may be diminished in application, since many new flights are by mainland Chinese airlines that have not yet developed cargo services and have limited networks for cargo.

Gulf airlines have widebody flights into 35 Western European airports in 33 cities (there is service to two London airports and two Istanbul airports). An intermediate hub in the Gulf not only reduces costs by relying more on inexpensive belly capacity, but it also increases the number of destinations that cargo can be flown to directly. This reduces the burden and cost of relying on trucking or rail to bring cargo to its final destination.

Although Gulf airlines do not serve every cargo market, 34 cities covers a significant portion. There are particular advantages in destinations like Brussels and Zurich, which are cargo markets but are connected by limited nonstop Asian flights.

In comparison, European airlines fly to Asia from their hubs and have limited, or no, intra-European widebody flights. Asian airlines collectively serve 21 airports/cities with passenger flights. 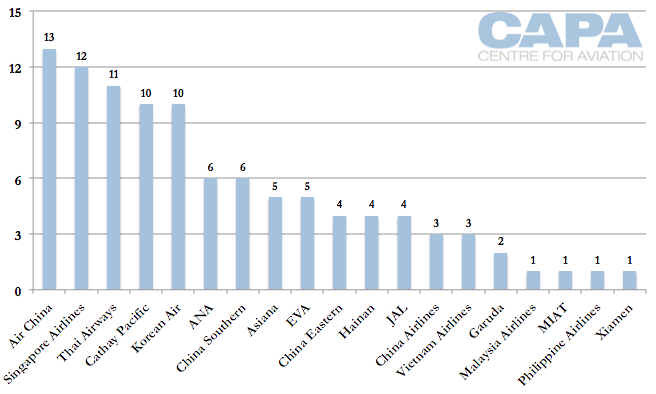 Gulf airlines are beginning to penetrate secondary Asian markets. Emirates has supplemented a freighter service to Zhengzhou with a passenger service to the same city, which is a Chinese manufacturing hub (including for the Apple supplier Foxconn). Qatar Airways intends to start service to Chiang Mai and Krabi.

Neither is a notable manufacturing hub but they do indicate willingness to expand to smaller Asian markets. Other secondary Asian markets – such as Penang – have more prominent freight demand.

As manufacturing continues to evolve and geographically disperse away from mainland China there will be more markets to carry freight from, and it is possible that Gulf airlines will have widebody passenger flights to these markets. The dispersal of manufacturing is a disadvantage to Asian airlines, who are accustomed to having most freight in their catchment area: Cathay Pacific used to be able to rely on demand from around the Pearl River Delta but now must fly to other Asian markets to win the freight for onwards shipment, adding costs in what has been a yield-challenged environment.

There is seemingly no easy answer to the state of the cargo market. Comments about overcapacity, weak yields and depressed load factors are perennial concerns.

The US port closure in 1Q2015 provided a welcome one-off lift, but overall the year was weak for most. Operators stress their desire to improve efficiency and target more high-value goods – worthwhile objectives that, alas, most others are pursuing too.

Most recent and more specific are cargo partnerships. IAG and Qatar Airways have a small partnership for Hong Kong, established after IAG's British Airways replaced twice-daily 747 services with 777/A380 service and needed additional lift for freight. Lufthansa and All Nippon Airways, which have a joint venture between Europe and Japan for passenger services, have established a joint venture for freight too.

Both of those partnerships were within respective oneworld (IAG and Qatar) and Star Alliance (Lufthansa and ANA) groupings. The May-2016 disclosure of a Cathay Pacific-Lufthansa JV covering the Hong Kong-Europe freight market breaks the mould – it is due to commence in 2017 from Hong Kong and in 2018 to Hong Kong.

The aim of the cargo JV reads similarly to that of passenger partnerships: more flights, feed support, common handling and integrated IT.

JVs and cargo alliances outside familiar partnership circles gain some popularity as IATA cautions that the global outlook for freight is once again discouraging. Year-on-year 1Q2016 growth was slower or negative for every region of airline registration excluding Europe (where changes have been small). There is some distortion from the strong 1Q2015 led by the US port closure, but IATA reckons that even without that distortion the outlook is bleak. It resigns itself to saying: "broad signs of softness mean that 2016 is shaping up to be another weak year for air freight." 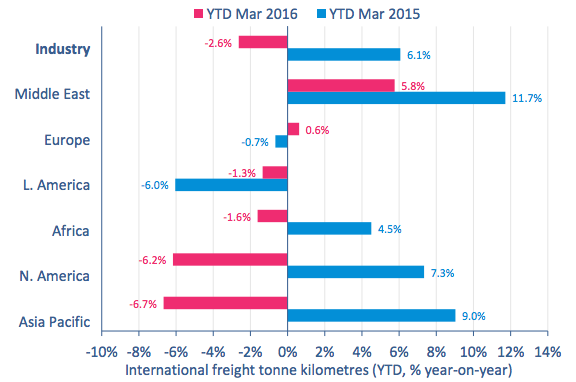 It is still early times to evaluate large-scale cargo partnerships. But seemingly the sector is in need of a rebound that no one has forecast; or a structural change. European airlines are cutting back on freight aircraft but Asian airlines are reluctant to make deep changes. In fact, one result of the low fuel prices in 2015 was that parked freighters returned to service with Asian airlines. The industry waits another day – or year – for change.