CAPA and SITA jointly released a study on 27-Sep-2013 on the potential for IT to transform the passenger experience in India by 2015.

The research found among other things that, although progress in India has been constrained by financial factors since our first study in 2010, management has now recognised that IT issues are integral ingredients of management strategy - rather than merely an operational matter. This will be essential if the system is to adapt to the high levels of traffic growth envisaged over coming years.

Consumer research consisted of a survey of 500 passengers across six metro airports and qualitative focus group discussions with travellers from a variety of ages, backgrounds and travel experience.

This is the third joint White Paper prepared by CAPA and SITA on IT in the Indian air transport industry. At the time of the first White Paper in 2010 there appeared to be an emerging recognition that technology can play a much more positive role in terms of increasing efficiencies, generating new commercial opportunities and improving the passenger experience.

Two years later we measured the level of progress against what had been expected in 2010 and the results were not encouraging. This partly reflected the financial difficulties being faced by the industry, but our study found that despite the potential observed in 2010, IT continued to be viewed as an operational issue rather than forming an integral component of the company’s key objectives. Regulatory issues also posed some challenges to the implementation of seamless coordination between stakeholders.

In this 2013 study we found that while progress in terms of the deployment of new technologies has remained slow due to the challenging financial environment, there are now clear signs of a renewed importance attached to IT. This is partly due to the increasing recognition of the potential to drive revenue through better understanding and leveraging of customer profiles.

Transformational changes are not expected in the very short term, however adopting a 2015 horizon provides grounds for optimism that Indian airline and airport passengers will by then enjoy an enhanced travel experience, and airlines and airports in turn will be generating increased revenue from them.

India’s aviation market is three times larger today than it was ten years ago and traffic is expected to triple again over the next decade. It is in such dynamic environments that thoughtful and innovative deployment of technology solutions can drive the greatest value.

Airports and airlines are increasingly mindful of the fact that in order to increase the value of each passenger, it is necessary to re-define the customer experience. Nevertheless, with IT being viewed as a cost centre at most airlines and airports, and given the recent downturn in the Indian aviation sector, both public and private operators are facing some challenges at present with striking a balance between investing in technology projects which will deliver returns down the track, and the more short-term pressures to reduce costs and increase revenue today.

Indian passengers are seeking a more seamless and experience

The airline-airport relationship is yet to reach a level of engagement which delivers a seamless travel experience to passengers and leverages the convergence of airline, airport and passenger technologies. This causes some frustration for passengers, particularly those that have experience travelling in other markets.

Check-in and bag-drop for example was identified as the most stressful part of air travel by 34.1% of passengers.

Due to the lack of coordination between stakeholders, airlines and airports have hesitated to promote new technologies such as mobile platforms and self-service, and as a result passengers have not been encouraged to use them.

In many cases the next-gen traveller prefers technology over human interface and is more confident and self-reliant than ever before. Nevertheless, it should be noted that India will also see large numbers of first time travellers entering the market every year which will necessitate that human touch points remain available.

With 82% of passengers surveyed carrying a smart phone, the Indian traveller is able and keen to utilise mobile platforms. However, to date the extention of core services such as reservations and check-in through a dedicated mobile application or even a mobile-optimised interface is still at a nascent stage. And more sophisticated and contextualised services are at least a couple of years away.

Passengers, particularly younger ones, expressed interest in using social media to engage more closely with airlines and airports. Social media has the power to both positively and negatively influence a brand depending on how well it is managed. As a result the aviation industry has to date been cautious with respect to their presence on such platforms, however data shows that many are trialling or intending to use it.

Airline Boards increasingly view IT as being strategically important, but cost pressures remain

The focus of IT heads is now shifting from core operational automation to deployment of intelligent systems that deliver better customer engagement, improved distribution and yield management, more effective network planning and increased asset utilisation. By the end of FY15 the focus is expected to shift increasingly towards driving revenue.

Priority Objectives for IT Deployment at Indian Airlines 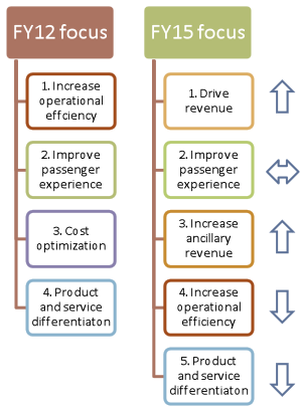 The provision of services by airlines to passengers on mobile devices is expected to be the next major development in the Indian airline industry as a result of the high penetration of smart phones among air passengers. This will also drive increasing engagement through social media. Both mobile technology and social media adoption by airlines and airports is limited presently.

Airlines continue to believe in the value that self-service technologies can deliver and several are pursuing initiatives such as automated boarding, self-bag drop and flight transfer kiosks over the next three years. However there is a need for closer coordination with airport operators to improve the physical layout and promotion of kiosks at the airport, to make them more widely available and to establish consistent pricing models that will incentivise all parties to move in the right direction.

Despite encouraging aspirations to embrace new technologies, the precarious financial condition of most carriers means that availability of budget is the biggest challenge to IT implementation. Other significant challenges include the unstable regulatory outlook; identifying the IT priorities and securing support from key business stakeholders.

Productivity and airport safety were central to IT department mandates in 2012, however the focus is shifting towards cost reduction and commercialisation of non-aeronautical opportunities. Airports are also under pressure to keep pace with the growing technical sophistication of passengers and to increase the level of engagement with them.

Priority Areas for IT Investment at Indian Airports 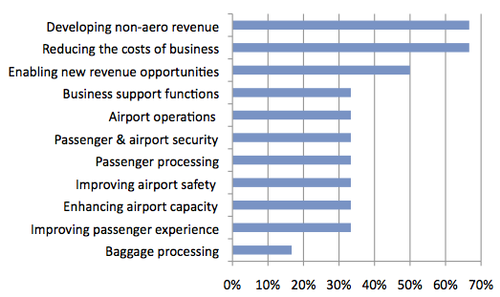 Leveraging mobile phones as a medium of engagement with passengers, and investing in the infrastructure that will enable increased use of self-service touch-points are high on the current agenda of private airports operators. Kiosks have generated limited traction in India to date and encouraging use of self-service technologies by passengers will be one of the priorities for IT heads.

Many of the challenges faced by airports are similar to those of their airline counterparts and include: budget availability; securing buy-in from senior management; lack of clarity on regulatory standards; and choosing the highest impact technology solutions for passengers and airport operations.

Airport and airline IT priorities are increasingly in sync, but better coordination is essential

Despite the fact that airlines and airports have been developing their IT strategies relatively independently, our study highlights that both sets of stakeholders are heading in a similar direction. Both parties see the importance of improving the passenger experience through technology. There is also increasing recognition of the fact that this can drive not only cost reduction through greater efficiency, but can generate new revenue streams that deliver to the bottom line.

Increased adoption of mobile platforms, self-service and social media were identified as priorities for both airlines and airports. This is encouraging as it indicates significant common ground which should increase the prospects for collaboration. While there are certainly challenges ahead, the increased use of technology to deliver revenue growth and operational efficiency in tomorrow’s highly competitive aviation market will be critical.

Recommendation 1: Airlines, airports and government agencies need to develop a much more collaborative approach if they are to extract real value from technology

The business models of tomorrow involve leveraging greater value from each passenger as they pass through the travel process, from the time of booking to arrival at their destination. A variety of stakeholders contribute to the passenger experience across multiple touch points which are increasingly inter-connected. Collaboration is essential to develop robust solutions that recognise these inter-dependencies.

Recommendation 2 Airlines, airports and passengers can all benefit more and more from self-service solutions

Self-service enables airports to use their real estate more effectively, airlines to reduce labour costs and passengers to spend less time queuing. Yet despite this convergence of interests the uptake of such technology in India has been limited because all parties have pursued such initiatives independently. A coordinated strategy with a clear plan will deliver better outcomes than an ad hoc approach. From the passenger perspective, usability and consistency are key to the adoption of new technologies.

The Indian business traveller increasingly looks forward to the day that they can access Wi-fi on board. And younger passengers are keen to have live streaming of in-flight entertainment to their mobile devices. Airlines should focus on how they can turn such features not simply into a point of competitive differentiation but to generate ancillary revenue.

As a result of the growing penetration of smart phones carried by passengers mobile platforms represent an opportunity to deliver a wide range of passenger services. This will also drive increasing engagement through social media.

Recommendation 5: Social media is a must, particularly for interacting with younger passengers

Airlines and airports cannot ignore the social media phenomenon and must start to develop an engagement strategy or risk being left behind. Social media initiatives must be backed up by a clear strategy, protocols and resources.

Recommendation 6: Airlines in particular should better exploit the goldmine of data that their passenger profiles represent

Strategic deployment of technology to collect and mine passenger data to drive retail opportunities represents one of the greatest prospects to enhance the viability of the Indian aviation industry. But the management of this data itself needs to be in line with best practices and governmental privacy laws.