CAPA’s India Travel Retail Report, which was released this week, surveyed more than 7000 passengers across 12 airports and highlights the massive potential of travel retail in India.

The worldwide airport duty free market was worth around USD23 billion in 2010 (source: Generation Research). CAPA estimates the value of airport-based duty free sales in India in 2010/11 at USD215 million, or less than 1% of the total, yet India accounts for around 3% of global airport passenger traffic. Clearly, retailing at Indian airports is lagging the rest of the world.

India’s underperformance in the duty free channel stems from a number of factors including a lack of good airport retail infrastructure, distribution complexities and a previously rigid investment policy.

Considerable progress has been made though. The growth of retail sales at the end of the decade has been spectacular. This has been driven by the introduction of private capital for airport development and operations, the building of brand new airports plus terminal revamps, and more international airport operators and duty free retailers entering the market. Between FY2006 (when Delhi and Mumbai were privatised) and FY2011 passenger numbers grew by 97%, but non-aeronautical revenue increased by 340%, of which retail was an important driver component.

The benefits of maintaining the rapid uptake of shopping at airports are potentially large – to airports by way of an expanding revenue stream increasing returns on terminal investment and providing greater operational flexibility; to airlines as a means of limiting the increase in aeronautical charges; and to travellers by way of greater convenience, access to more goods at better prices, and an improved travel experience.

In FY2011, duty free stores across India are estimated to have turned over USD215 million, with Delhi Airport leading the way at USD72.7 million. Data for FY2012 is not yet available however industry sources point to strong growth of 25-30%. 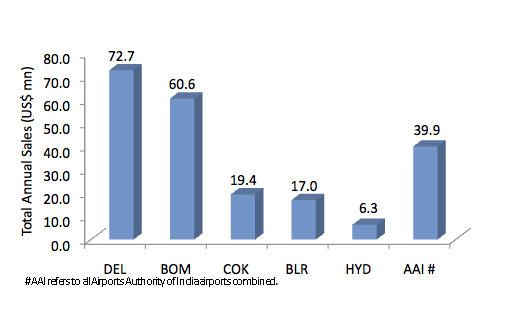 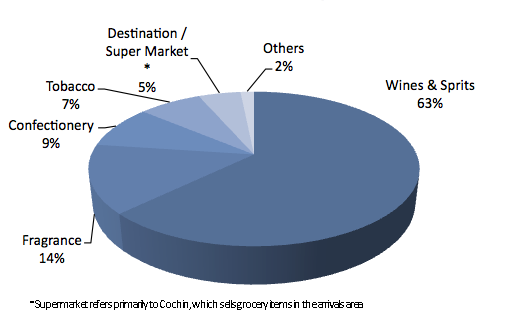 However, when placed in a global context, there is quite clearly significant room for further growth. Dubai Duty Free reported sales of USD1.46 billion from its single airport operation in 2011, while revenue across all Chinese airports combined is estimated at USD1.9 billion (source: The Moodie Report).

India’s airport retail story has, however, unfolded only in the last five years. International standard retail formats were entirely absent from Indian airports, even the metro gateways, until recently. However, the travelling public has responded strongly to a vastly improved offer which combines more attractive shopping environments, a wider range of products and importantly, competitive pricing.

In the case of the largest airport, Delhi, duty free spend has increased 400% over the five years to FY2011, while the growth at Mumbai has been even faster off a lower base. Both airports are expected to continue to record growth above 20-25% p/a for the next few years. 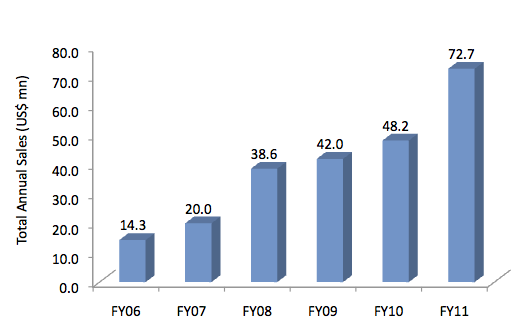 Retail represents a major addressable opportunity because more Indians are travelling, they are travelling more often and they have more money to spend when they do. A clear feature of recent duty free spending patterns in India, particularly for liquor, is that the sales of premium brands have outstripped regular products.

For example, malts and premiums which used to account for 41% of the volume of whisky sold at Indian airports, now account for 57%. In part this is a function of supply as earlier there were limited products on offer. 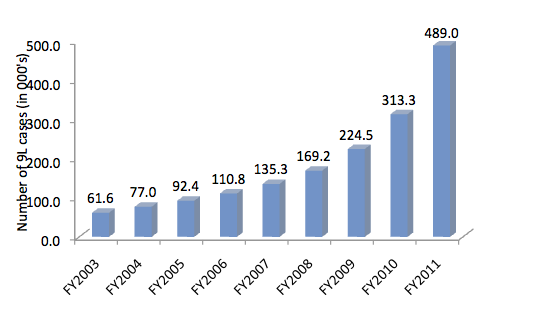 In terms of categories, which passengers stated that they would like to see more of at the airport, the two most requested were electronic goods (which rated in the top three at 11 out of 12 airports) and fashion/clothing, followed by cosmetics, sports goods and watches/jewellery. 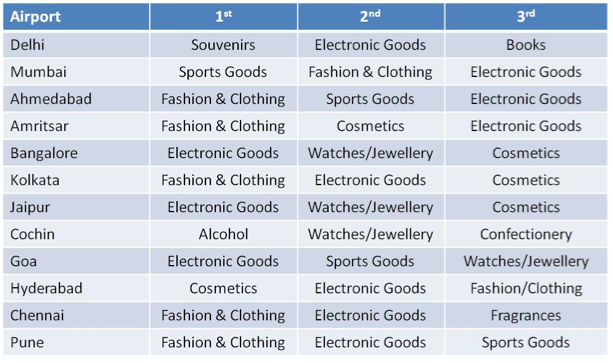 Indian nationals represent approximately 70% of international passengers travelling through Indian airports, slightly less at most of the metro gateways due to the fact that foreign nationals are less likely to travel directly to the smaller cities in India. Delhi Airport has the highest percentage of foreign nationals (this includes persons of Indian origin) at 43%, due to the fact that this airport is the primary entry point for international tourists travelling to Agra and Rajasthan. The airport also serves the Punjab region which receives VFR travellers from the UK, US and Canada, a large proportion of whom hold foreign passports.

Indian nationals as % of international arrivals by airport: 2009 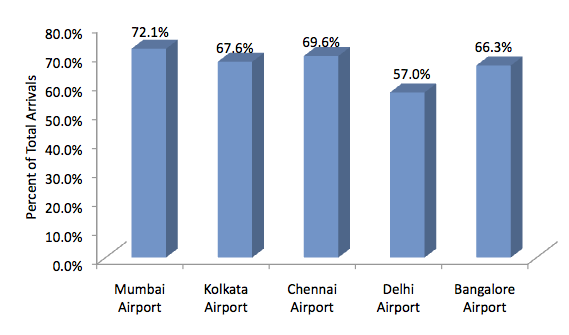 The relative proportion of Indian and foreign nationals has implications for the optimal retail product mix at airports, and the relative size of departures and arrivals stores. Foreign visitors, for example, tend to seek more unique destination products and are more likely to shop on departure. In the survey, Delhi was the one airport where souvenirs ranked strongly as a category that passengers would like to see better represented.

Meanwhile, Indian nationals are more likely to shop on arrival, in fact Indian airports are relatively unique in that Arrivals stores generally outperform Departures in terms of retail revenue, particularly as the best selling category is liquor, which passengers prefer to purchase when they return.

Even within the category of foreign passengers there are significant differences between the mix of nationalities, and there is a need to carefully research their respective preferences when deciding on the appropriate product offer. And the mix is evolving as visitors from Asian and other emerging markets are growing faster than the traditional source markets.

Western Europe and North America are the two largest source regions for inbound visitors, but they are also the slowest growing with a CAGR of 6-8% over the five years from 2005 to 2010. Meanwhile arrivals from Asia are growing at almost twice the rate. Other markets such as Eastern Europe, the Middle East and Latin America are also showing strong growth but are much smaller in absolute terms. 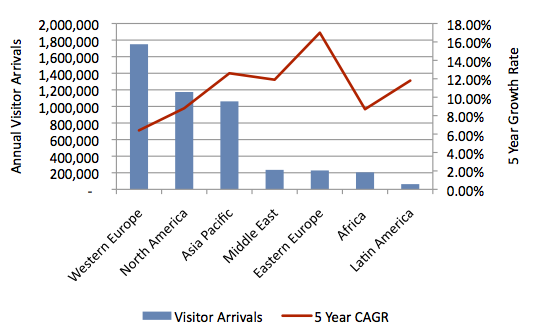 As can be seen in the charts below, Delhi Airport has a very high percentage of passengers from Western Europe, following by North America, whereas in the case of Chennai, the largest foreign passenger numbers come from South Asia (predominantly Sri Lanka) as well as there being a relatively higher percentage from Southeast Asia than at other metro airports. 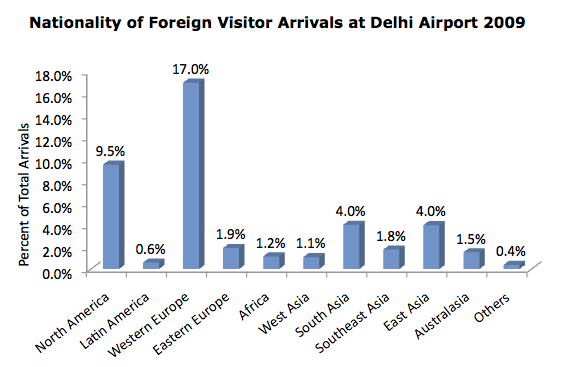 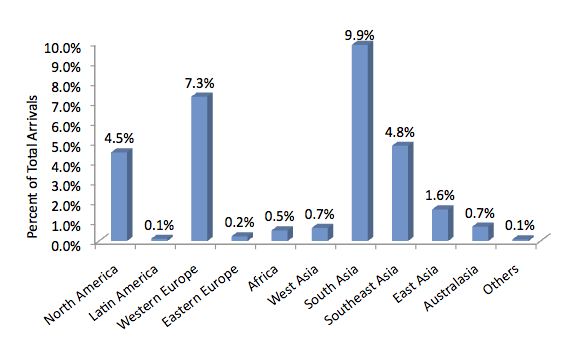 CAPA projects strong continuing growth in Indian aviation and across virtually all Indian airports. International traffic is expected to achieve a CAGR of 9.9% over the 10 years to FY2021, while domestic traffic is projected to grow even faster at 13.0% p/a. The Indian aviation sector is facing some short-term challenges at present, however, the underlying fundamentals remain strong.

Positive air traffic forecasts in turn raise the prospect of rapid growth in the retail sector resulting simply from increased passenger flows, even if there were to be no change in the share of passengers shopping on-airport or in the average value of transactions. But current spending levels are low by international standards.

The real gains in airport retailing will be made when more passengers are encouraged to spend, and when the value of individual transactions increases. With per capita incomes in India expected to more than triple over the next 10 years, and McKinsey forecasting a far greater increase in the proportion of the population defined as being in middle or upper income classes, such a hypothesis seems highly likely.

The Government of India is targeting sustained GDP growth of 8-9% p/a for the next two decades which would be transformational. In addition, the existence of a substantial grey and cash economy, which is not captured in official data, means that actual growth is higher than reported.

Potential for USD3.5 billion in airport retail and food and beverage spend

CAPA developed a model combining the passenger traffic projections, per capita incomes in different cities, the projected growth rate of their local economies and qualitative analysis of drivers of consumption to arrive at revenue projections for traditional duty free, domestic duty paid, general retail and food and beverage. Total passenger spend is estimated to have the potential to reach USD3.5 billion by FY2021, of which traditional duty free could grow to USD1.55 billion up from USD215 million in FY2011.

Within the traditional duty free segment, liquor is projected to remain the largest single category, although its share is expected to decline to 43% (down from 63% today). Combined with a large share of the duty paid revenue, Indian airports could see liquor sales of over USD800 million p/a by FY2021. Beauty products and fragrances are projected to see growth of 16 times.

It should be noted that of the USD3.5 billion forecast, close to 70% is projected to be generated at the public-private partnership (PPP) airports of Delhi, Mumbai, Bangalore, Hyderabad and Cochin. These airports already have a strong demonstrated commercial orientation which increases the likelihood of them achieving their potential. Delhi Airport has the strongest prospects to establish itself as a hub airport attracting large flows of transfer traffic, in which case it could even exceed the projected spends. However, this will be highly dependent upon the ability of Indian carriers to develop strong global networks.

However, whether the rest of the airports in the country which are operated by the state-owned Airports Authority of India (AAI) can achieve their unconstrained potential is subject to a number of factors such as the ability to introduce a stronger commercial focus at the management level of the airports; construction of sufficient capacity to meet demand and the allocation of bilaterals for services to non-metro airports. The AAI’s track record in retail development lags the PPP airports, with average duty free spend per passenger of USD3.05, compared with USD7.08 at PPP airports.

The downside risks are higher for the non-metro airports than Chennai and Kolkata, but even here we would need to see a much more aggressive commercial approach by the AAI. The projection of USD1.1 billion for the AAI airports could therefore be considered to be an optimistic scenario if a number of factors align as described above.

However if the AAI is able to leverage this potential it stands to be one of the greatest beneficiaries of the travel retail phenomenon. The net income generated from a possible USD1.1 billion in gross retail spend could transform the financial status the authority and help to fund its massive capex requirements.

There are exciting opportunities for growth in the airport retail sector in India. Provided the regulatory environment is right and the necessary airport and airline investment take place, growth in Indian aviation is inevitable. Accompanying that with profitable, sustainable retail growth offers the opportunity for increasing the commercial viability of the sector and enhancing the travel experience. But this requires an informed and considered approach if travellers are to be converted to shoppers.

The CAPA study found the key challenge for retailers and brands will be to understand that the Indian consumer is incredibly diverse in terms of income levels, travel experience and tastes, and that this is further complicated by rapidly changing socio-economic influences. Detailed research about the consumer must be central to the planning, design and development of retail formats.

The CAPA India Travel Retail report delivers a comprehensive perspective on the structure and performance of the sector today and the outlook for 2021, combining analysis of the aviation sector, interviews with key industry stakeholders and extensive consumer surveys and focus groups. For more information please download the attached brochure, or contact Binit Somaia on bs@centreforaviation.com.