The COVID-19 pandemic has resulted in airlines worldwide pivoting to their respective strengths in order to stem the continuing bleeding.

In the US, each of the country’s large US global airline operators – American, Delta and United – have turned to a different area of strength, ranging from cargo to brand loyalty.

Those airlines have also adopted differing approaches to fleet management, with American and Delta opting to retire aircraft at a faster rate than United.

Of course, those companies and all airlines continue to look for an inflection point, where a pronounced recovery in demand will occur, but until that happens they will continue working to leverage the aspects of their business that can quickly produce benefits as pandemic losses mount.

Broadly a year into the pandemic, COVID-19 has become a stubborn reality for the airlines, and as a result those operators are looking for any bright spots in their business to leverage.

Speaking at the recent CAPA Live February conference Deutsche Bank MD and senior research analyst Michael Linenberg observed that United, due to its international network, had relied a lot more on its cargo business. Indeed, United’s cargo revenues in 4Q2020 jumped 77%, compared with 17% at Delta and 32% at American.

Delta, meanwhile, has been pushing its product, said Mr Linenberg, noting that the airline has been highlighting its net promoter score (which hit an all-time high of 71 in Dec-2020).

Through 30-Apr-2021 Delta has also extended the blocking of its middle seats on its entire mainline and regional narrowbody fleet, and is also limiting first class cabin seat capacity to 50%.

The airline appears to be using the middle seat strategy as a brand differentiator, and Delta’s executives recently stated that the companies had outperformed its peers in passenger revenue during 2020, despite offering fewer seats for sale.

Mr Linenberg stated that while ever other airline at this point “is just filing up aircraft”, Delta has a really strong focus on service - even though it leans dangerously close to marketing safety, something the airline industry has almost always eschewed.

A benefit for American is having hubs in sun destinations, such as Phoenix, Dallas and Miami, said Mr Linenberg.

However: “You would expect American to do better than United and Delta just because they have more of a domestic geographic exposure, and even within the US market they have a lot less exposure on the West Coast and Northeast”, where there are more lockdowns and closures, said Savanthi Syth, MD at Raymond James Financial.

Joining Mr Linenberg during a panel discussion, Ms Syth suggested that American’s performance compared with Delta and United, “goes to show you the leverage they had coming into this”.

During 4Q2020 revenue at both American and Delta fell by approximately 65% year-on-year, and United posted a 68.7% decline. But American’s pretax loss was USD2.8 billion, compared with USD1.1 billion for Delta and USD2.3 billion at United.

The three largest US global airlines have also adopted different approaches in managing their fleets during the pandemic.

Ms Syth remarked that Delta had announced that it would be retiring approximately 20% of its year-end 2019 seats during the next five years, and approximately 10% had been retired as of YE2020.

“That’s pretty similar to what you’ve heard from American as well”, said Ms Syth, noting that the airline had retired approximately 10% of its 2019 seats by the end of 2020.

“At United, it is about 1%, a significant difference there.”

At the onset of the pandemic, American's and Delta’s narrowbody and regional aircraft fleets were larger than United's, explained Ms Syth. “United has been lagging on the domestic front, so it makes sense that you haven’t seen United do as much on the narrowbody/regional side”, she stated.

United is likely taking a “wait and see approach” on widebody retirements, Ms Syth noted, adding that the airline has older aircraft to retire but is likely gauging the recovery, “and which of those aircraft makes the most sense to retire.”

CAPA’s Fleet Database shows that as of mid Feb-2021, United has 44 Boeing 767s as inactive. The average age of those aircraft is 23 years. 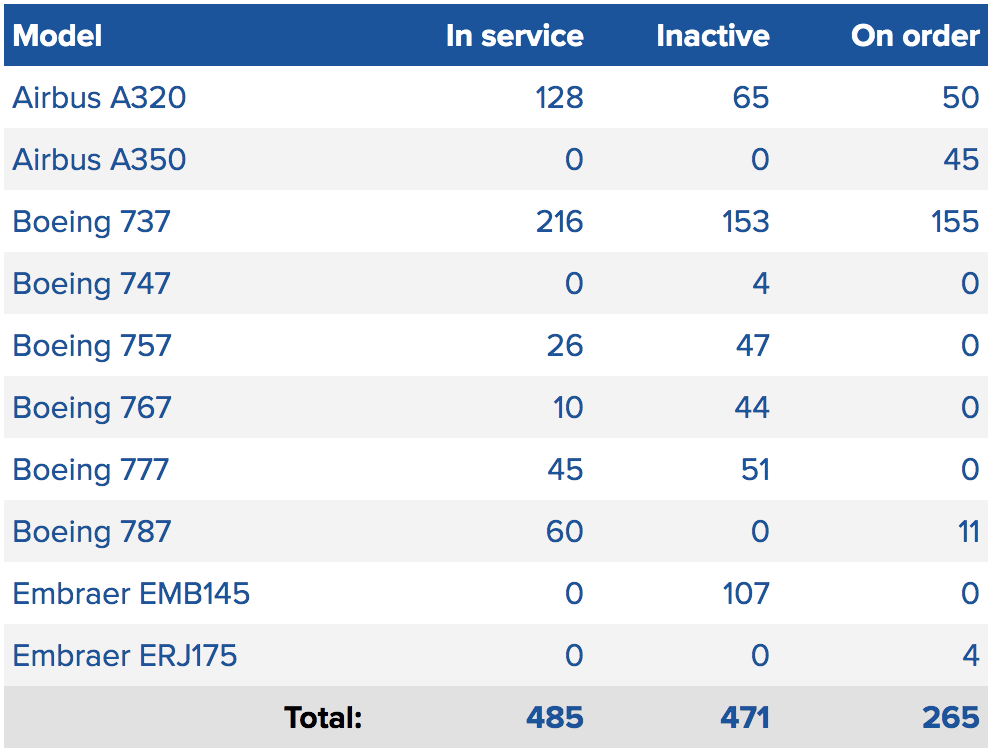 Recently, United CFO Gerald Laderman stated that the only decision the company had made regarding aircraft retirements was just 13 Boeing 757-200s, which have engines that were among the oldest in United’s fleet.

“We want to maintain as much flexibility as possible”, said Mr Laderman.

Delta also had more aircraft that were fully owned, Ms Syth stated, which has given the airline a selection of older aircraft to retire.

She also highlighted that United had taken more of an effort early on in the pandemic to “simply fly their fleet[,] whereas American and Delta were further behind.”

“I think there were a lot more benefits to American and Delta to immediately retire aircraft”, said Ms Syth.

No entity can accurately predict when a true inflection point will occur in demand; but there are some green shoots emerging for the US summer period.

Nevertheless, as new variants of COVID-19 emerge there is no certainty that those positive trends will have staying power, and the challenges in vaccine distribution and administration continue.

In the meantime, the three large global US airlines will continue to adopt differing approaches to shoring up their respective strengths until demand stabilises.