Eddie Wilson, CEO of Ryanair DAC (the Irish airline that forms the Ryanair Group's biggest operating unit), told CAPA Live on 14-Jul-2021 that Ryanair's growth and financial strength are advantages in staff recruitment and retention: "You ask anyone on the street, who's going to survive this crisis, people say Ryanair, and our employees are no different".

Both Ryanair and fellow ultra LCC Wizz Air are growing more aggressively than other leading European airline groups. The smaller Wizz Air plans growth at higher percentage rates, but Ryanair is set to add more aircraft and passenger numbers in absolute terms in the next four to five years.

Ryanair said that the 2,000 new pilots would be needed to crew its planned aircraft deliveries over the next three years.

In Europe, only Wizz Air has more outstanding orders in total

Ryanair's outstanding order of 205 aircraft is the second highest of any airline group in Europe. At the top of the list is Wizz Air – like Ryanair, an ultra-LCC – with 241 Airbus narrowbodies on order.

Both ultra LCCs are comfortably ahead of Lufthansa and Aeroflot, which are in joint third place with a total of 157 outstanding orders, comprising both narrowbodies and widebodies.

The next biggest narrowbody order after Wizz Air and Ryanair is the 108 Airbus A320 family deliveries due for easyJet, with the majority of deliveries not due until 2024-2027.

Norwegian Air Shuttle has 91 Boeing narrowbodies on order, a legacy of its expansive past, but delivery dates are uncertain as the group is restructuring.

The two ultra-LCCs, Wizz Air and Ryanair, have by far the biggest orders in Europe. However, Wizz Air deliveries are spread out until 2027.

Ryanair's 205 deliveries are all due over the next three years up to the end of 2024, comfortably ahead of Wizz Air's 109 expected in the same time frame.

Ryanair's 737MAX deliveries will be used partly to replace older 737-800s, but will also be crucial to achieving traffic growth. It aims to carry more than 200 million passengers in FY2026 (year to Mar-2026).

In FY2020, most of which was pre-COVID, Ryanair carried 140 million passengers.

This slumped to 27.5 million in FY2021. For the current financial year, FY2022, Ryanair expects traffic at the lower end of a guidance range of between 80 million and 120 million passengers. 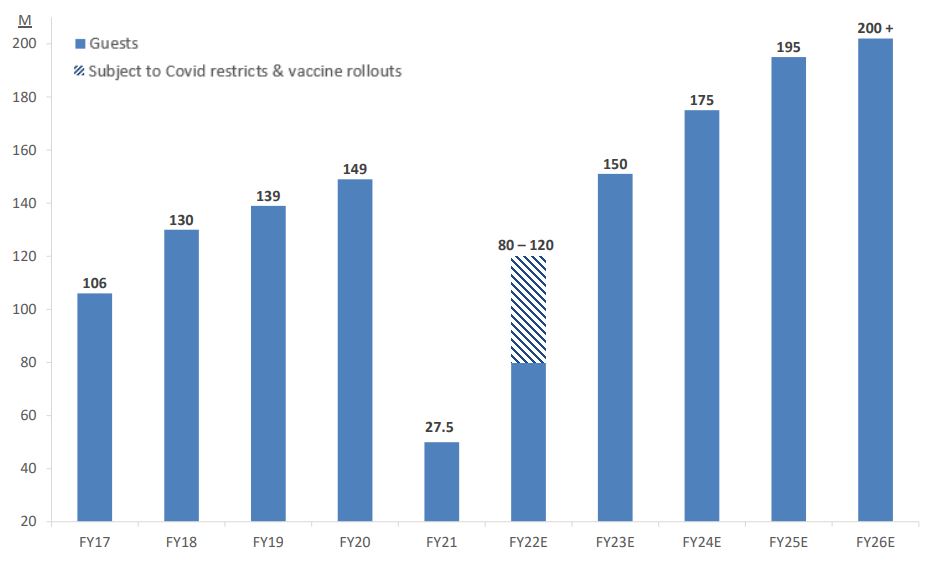 An increase in average aircraft size from 200.8 seats to 228.5 (driven by A321neo deliveries) seats should lead to a more than doubling of passenger numbers to around 90 million in FY2026. This would represent growth of 125% for Wizz Air, compared with around 45% for Ryanair.

However, Wizz Air's additional 50 million passengers from FY2020 to FY2026 would not quite match Ryanair's more than 51 million.

Ryanair cut pilot hours and pay in the crisis...

In FY2021 Ryanair Group's staff costs fell by 57%, to EUR472.2 million. Labour costs did not fall in line with the 74% drop in sectors flown, partly because not all jobs are directly related to flying, but also because Ryanair's approach was to retain headcount as much as possible in readiness for the recovery.

Similarly, Wizz Air's staff cost reduction of 43% in FY2021 was less than its 62% reduction in flights.

Ryanair minimised job losses by agreeing cuts in hours and in pay for flight crew and by participating in government job support schemes. The above staff cost figure for FY2021 is net of EUR84 million of payroll support from governments in Ryanair's markets (without which the reduction would have been only 50%).

...but agreed to return to normal hours and pay in the recovery

Ryanair's increased capacity since the low point of the coronavirus pandemic is now prompting a return to normal activity levels for some of its pilots. Agreements with pilots in the crisis envisaged this.

Pilots at Ryanair's Spanish bases had a reduction of between 20% and 50% in their work activity, under a Temporary Employment Regulation in Spain.

On 24-Jun-2021 the Spanish pilot union SEPLA announced that these pilots would return to 100% of their hours and salaries. Ryanair is the second airline, after easyJet, to dispense with the Temporary Employment Regulation in Spain.

According to SEPLA, Ryanair responded to pressure from the union, which did not want the airline to resort to using external staff while retaining the labour restructuring measure.

Although SEPLA's statement contained some mild criticism of Ryanair and the possibility of its using external pilots, its tone was generally positive and optimistic about relations with the airline and the prospects for a pilots' collective agreement.

According to Ryanair's Eddie Wilson, speaking at CAPA Live on 14-Jul-2021, employees appreciate the airline's no nonsense approach to reducing hours and pay in the crisis, and its commitment to restore pre-COVID conditions.

"…We are straight up in how we do our business and the vast majority of our people recognise that. Most people in this world want to work less and be paid more. That's fine, but this isn't the time for it. We did those agreements really, really quick, and that's a function of our people and what they believe needed to be done…", Mr Wilson said.

Both Ryanair and Wizz Air plan aggressive growth over the next four to five years, more than other airlines in Europe.

Wizz Air's growth will be more rapid in percentage terms, but Ryanair's growth plans imply that it will add more aircraft and passengers in absolute terms.

This suggests that Ryanair should be in a position to offer more job opportunities in the coming four to five years than any other airline group in Europe.

Growth should be positive for industrial relations at Ryanair

There have been times when Ryanair has been criticised for its human resources policies.

In the past, industrial relations were sometimes tarnished by its use of contract staff, its preference for Irish labour law over local labour in employment contracts, and its refusal to negotiate with unions until 2018.

However, in an environment when many of the large airline groups competing with Ryanair will be burdened by debt and/or state aid repayments, Ryanair's growth could be an advantage in the attraction and retention of flight crew.

Mr Wilson certainly believes that growth is positive for industrial relations at Ryanair. He summed up his message to employees while speaking at CAPA Live on 14-Jul-2021:

"Very simple message: we'll preserve the jobs and you will get pay restored over the next three to four years, and the promotions and everything will continue, and the new aircraft are coming".