CAPA will release its annual India Aviation Outlook on 15-Jun-2014, covering the financial year to 31-Mar-2015.

On the brink of an Indian national election, with market changing airline partnerships occurring and major new entrants arriving, the year promises to be no less eventful than any over the past decade. Some 400 new aircraft are likely to be ordered during the year.

Domestically, with all airlines in loss, new strategies are going to be needed; equally there are massive strides to be made in improving infrastructure to accommodate the inevitable high growth levels. Mumbai will be high on the agenda in a new electoral cycle.

In one of the world's most complex and challenging emerging markets, CAPA's India Outlook has become an invaluable reference tool. This brief review looks at some of the main issues.

The report will also present in-depth analysis of the leading airport operators, the status of airport privatisation and greenfield development programmes, upgrades to air navigation services and critical insights into ground handling, maintenance, general aviation and policy and regulatory developments.  Early bird discounts of up to 45% are available for orders and payments received by 7-Mar-2014. For more information contact Tarika Wadhwa on capaindia@centreforaviation.com

India's carriers are set to report yet another year of widespread red ink in the year ending 31-Mar-2014. Three carriers – Air India, Jet Airways and SpiceJet – are expected to post combined losses in excess of USD1.2 billion. And this figure could rise higher as a weak outlook for March could trigger further promotional pricing.

Air India is once again expected to incur the largest loss at close to USD700 million, although this represents an improvement of approximately 20% year-on-year in local currency terms. Jet Airways and SpiceJet are likely to report record losses. In addition to their losses, Air India and Jet Airways are also likely to be impacted by travel agency defaults which have reached USD40 million in Delhi recent weeks and could increase further.

IndiGo will be the only carrier to report full year profitability but this too will be significantly lower than our earlier estimates. Nevertheless, as the only consistently profitable airline in India the time may be approaching to leverage this achievement and an IPO is possible in FY2015.

CAPA India Aviation Outlook Report will include detailed analysis of the operating and financial performance of each carrier in FY2014 and the outlook for the year ahead.

India’s incumbent carriers can expect no respite on the competitive front heading into FY2015 with several new carriers expected to launch operations. Apart from AirAsia India and Tata-SIA a further 2-3 start-ups are reportedly awaiting licences to commence national and regional operations. The induction of additional capacity when load factors are already soft, and the consequent downward pressure on yields is expected to hurt all carriers. Continued red ink may start to test the holding power of a couple of airlines.

Fortunately the incumbent carriers are only planning modest capacity increases in the year ahead. Jet Airways is likely to freeze its domestic operations at close to current levels for the near term, and similarly Air India. GoAir is due to take one more aircraft in mid-2014 and then does not have any aircraft scheduled for delivery until the first of its A320neos start to arrive in 2016.

And SpiceJet is conducting a detailed review of its operations which could involve a short-term reduction of its domestic narrow body operations by the equivalent of close to 10 737s. Question marks continue over its long term plans in the regional segment which has to date faced significant operational and reliability issues.

CAPA India Aviation Outlook Report will review each of the prospective start-ups in FY2015 including AirAsia India, Tata-SIA, Air One and other, and analyse their planned business models, networks and competitive positioning.

Traffic in FY2014 has performed in line with CAPA estimates. In FY2015 domestic growth could remain volatile, but international expected to continue steady double digit growth

In Mar-13 CAPA presented our FY2014 growth projections for the Indian market. Data for the first three quarters of the year shows actual growth to be in line with our estimates. Domestic traffic is up 6% (CAPA estimate was 4-6% with expectations towards the upper end of the range) and international traffic for the first eight months is up 10.7% (CAPA estimate was 10-12%). 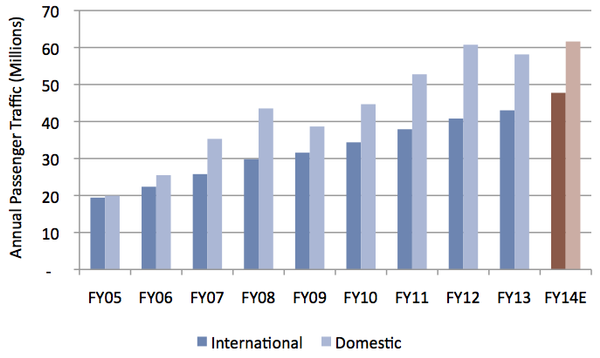 The high cost operating environment and the continued weakness in the economy would suggest that domestic traffic growth remains vulnerable and all other things being equal may remain in low single-digit territory in FY2015. However, there is considerable uncertainty about the potential impact of the new market entrants.

If a fare war is instigated traffic growth could be stimulated significantly above this underlying rate; however this would be at the expense of airline balance sheets. Domestic traffic performance could therefore be volatile from month to month. However, we may see signs of a more sustained recovery from 3QFY2015 onwards as economic confidence is expected to increase following the general elections.

International traffic on the other hand has been a strong and steady performer over the last decade, even during periods where the domestic has dropped into negative territory. Growth for the 12 months ending 31-Mar-2014 is expected to reach 12% year-on-year. In FY2015 double-digit growth of 10-12% is expected once again and may exceed 15% if the 5 year/20 aircraft rule is lifted and a number of bilaterals are relaxed.

Indian carriers are expected to order up to 400 aircraft this year in addition to those already on the order books. However some carriers may face challenges in raising funding for the acquisitions.

At the end of 2013 Indian carriers had approximately 350 aircraft on order.

By the end of FY2015 India's order book is likely to have swollen to over 700 aircraft, including Air Costa’s recent order for 50 firm (plus 50 options) Embraer regional jets, and Tata-SIA’s 20 A320s, which may be converted from operating to finance leases. Tata-SIA’s conservative initial order will certainly be followed by a more robust long term order if the 5 year/20 aircraft regulation is lifted. SpiceJet and Jet Airways are expected to confirm reported orders for 40 and 50 737MAX aircraft respectively.

Jet may also be allocated some of the more than 100 wide body aircraft ordered by Etihad at the Dubai Air Show in Nov-2013. Meanwhile, IndiGo is expected to place another massive order for 200-250 additional aircraft.

However financing of this equipment may be challenging for some carriers. Given the ongoing difficulties in the operating environment and with the Kingfisher experience still fresh, some banks and lessors remain concerned about the level of risk in the Indian market, especially as the provisions of the Cape Town Convention are yet to be formally incorporated into the Indian Civil Aviation Regulations.

Foreign investors may take a watch and wait approach for now, no new transactions are likely until at least 1HFY2015

Further foreign airline investment transactions involving existingIndian carriers appear unlikely in the short term given recent losses and in light of the increasing intensity of competition in the market as a result of the expected launch of several new airlines. SpiceJet has reportedly signed a terms sheet with a UAE-based investor however the ongoing challenges in the market may make it difficult to close this deal.

Go, which has also been in the market for some time is similarly expected to face challenges in securing an investor in the near term.

Indian airlines are expected to require capital infusions of USD1.6 billion over the next 12-18 months just to continue operations, let alone investment in aircraft. Air India accounts for approximately USD1 billion of this requirement. Inability to access sufficient funds when required may impact the operational integrity and customer proposition of some carriers.

The government’s fiscal deficit means that it is already facing challenges in honouring the funding that it has committed to the national carrier. And under its proposed turnaround plan Air India is expected to require a further USD3.9 billion of funding before returning to profitability. With the internal and external operating environments having become even more challenging since the turnaround plan was developed, these estimates are likely to be conservative.

As a result, a practical and dispassionate approach requires that all options be on the table, including privatisation. 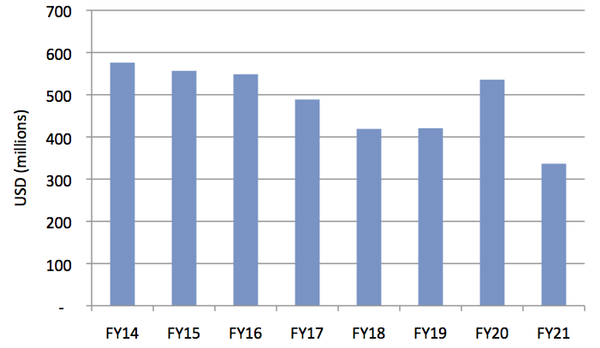 CAPA India Aviation Outlook Report will include detail analysis of the funding requirements of each airline and provide a comprehensive assessment of the realistic options on the table for the future of Air India.

The Jet-Etihad deal is once again under the spotlight, significant challenges still remain. Delays have been costly and almost all of the USD379 million equity infusion will be wiped out by FY2014 losses.

After having earlier received all of the necessary approvals, the Jet-Etihad deal has reportedly once again come under scrutiny from several agencies including the Competition Appellate Tribunal (COMPAT), the Securities and Exchange Board of India (SEBI) and even the Home Ministry, seeking additional clarifications with respect to the ownership and control of the company.

We do not see any major issues emerging out of these reviews however the pending legal case could be more challenging. Meeting compliance with the regulatory requirements has distracted management focus away from turning around Jet Airways and from strengthening the extent of cooperation with Etihad.

And going forward the FAA downgrade will force a re-think of the carrier’s network expansion plans which included the opening of new routes to the US which will not be permitted until India’s Category 1 status is restored.

CAPA India Aviation Outlook Report will present a detailed reviw of the Jet Airways-Etihad partnership and the expected developments and implications for the year ahead.

Emirates, Lufthansa and Singapore Airlines may all commence A380 operations this year

Although a clear bilateral strategy will only emerge in the second half of 2014, in the meantime the seat entitlements in selected bilateral agreements (e.g. India-Dubai) may be increased modestly to permit carriers to operate A380s without having to reduce frequencies. The government has only recently relaxed the restriction on A380s operating to India.

Emirates may be the first to launch A380 services once it has sufficient additional seats to be able to upgauge those services from Mumbai and/or Delhi that connect with the morning departure bank from Dubai. Other carriers which are likely to start A380 operations to India in FY2015 include Lufthansa and Singapore Airlines.

CAPA India Aviation Outlook Report will present a detailed analysis of the structure of India's bilateral air services agreements and their impact on international traffic flows.

This report highlights the key themes from the airline section of the FY2015 edition of CAPA India Aviation Outlook Report.

CAPA has a strong and established track record in accurately identifying key trends and developments in the Indian market, both on an annual and long term basis. For more information, or to order the full 300+ page report to be released on 15-Jun-2014, contact Tarika Wadhwa on +91 11 4692 1036 or email capaindia@centreforaviation.com.

A special Early Bird Discount of almost 45% - reducing the price to just USD2,555 - is available for orders and payments received prior to 7 March 2014.