The latest six monthly update of the CAPA world airline industry operating margin model lowers its forecasts for margins in 2018 and 2019. This partly reflects a downward revision to the margin reported by IATA figure for 2017 but, more importantly, reflects an increase in the oil price outlook.

The model reiterates the previous conclusion that the world airline industry's operating margin cycle peaked in 2016. However, if downward revisions to forecasts and falling margins are the bad news, there is also some good news in the airline industry's profit outlook.

The good news is that the current airline cycle is looking better than any other since the dawning of the jet age. Operating margins, even as they move into a downswing, look set to remain above levels that were associated with peaks in previous cycles. Whereas historic cycles tended to peak at an operating margin of around 6% before fairly quickly falling, the current cycle could record at least five consecutive years of margins at levels comfortably above previous cyclical peaks in 2015-2019.

The Jul-2018 update of the CAPA world airline operating margin model is summarised in the table below.

Changes to the model versus the Jan-2018 update

The main differences between CAPA's Jul-2018 model and the Jan-2018 forecast are as follows:

The IMF's Jul-2018 economic outlook maintains its forecast for 2018 world GDP growth of 3.3% (at constant prices and at market exchange rates), extending this same growth forecast to 2019 fractionally above its long term historic trend rate of 3.1% for the first time since 2010.

After the world economy achieved growth of 3.2% in 2016, this would be the first time since 2004-2007 that world GDP has grown faster than its historic trend rate of 3.1% for three successive years.

Consequently, world RPK growth looks set to remain at, or above, its long term trend rate of 6.2% throughout the forecast period (and for five consecutive years, 2015-2019, if the forecast is borne out). 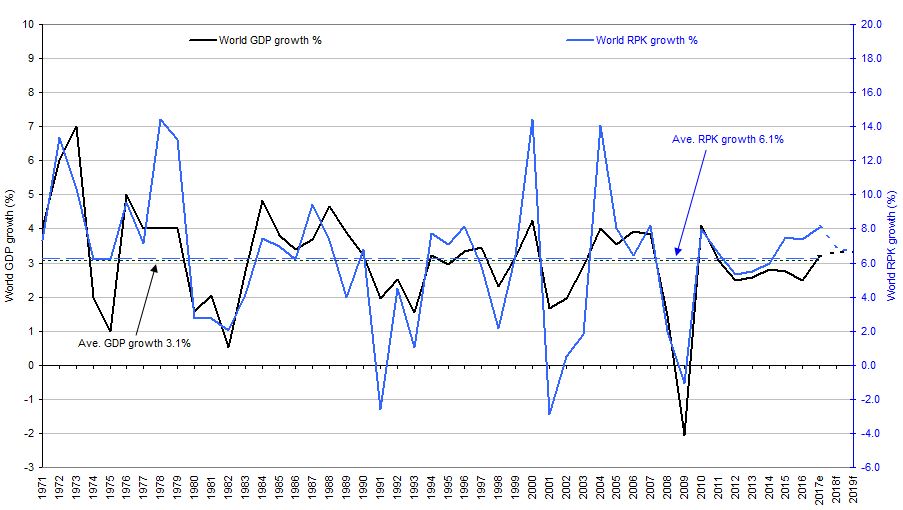 Fleet growth to increase from 2017, but retirement rates are the main uncertainty

Fleet growth took an unexpected dip in 2017, based on figures updated since the Jan-2018 CAPA model. Although data on deliveries were known earlier in the year, data on retirements have been revised upwards from 1.5% of the fleet to 3.2%.

This uptick in aircraft retirements was most likely stimulated by the rise in oil prices in 2017 (and the anticipation of further increases in 2018), and also reflects an increase in the number of old generation aircraft (737 Classics, 757s) reaching the end of their economic lives.

This increase in retirements lowered the annual rate of growth in the commercial jet fleet in 2017 to 2.8% from a previous estimate of 4.6%. This interrupted an upward trend in fleet growth since it dipped to 2.6% in 2011.

For 2018, fleet growth is forecast to be 4.3%, the same as the previous CAPA forecast, although the lower growth in 2017 means that the world fleet will be a little smaller than previously modelled.

These 2018 and 2019 fleet growth forecasts would be higher than for any year since 2001 (when it was 5.6%), but still some way short of previous peak growth rates of more than 7% and below forecast traffic growth rates.

As was highlighted by the increase in aircraft retirements in 2017, future retirement levels are the biggest source of uncertainty in the fleet growth forecasts. Further oil price increases could trigger another year of higher retirement rates.

Source: CAPA – Centre for Aviation, US Department of Energy.

The relationship between oil prices and airline fuel costs as a percentage of revenue is not exact, since a number of factors introduce distortions. These include fuel hedging, which smooths out and delays the impact of price fluctuations, as well as currency movements and long term improvements in the fuel efficiency of aircraft engines and airline operational processes.

Revised data from IATA now show that the world airline fuel bill was USD149 billion, or 19.8% of revenue.

The upward turn in fuel cost as a percentage of revenue started sooner than previously expected (as noted above, it is not just a straightforward function of the oil price upturn).

This burdened the airline industry with some additional cost above what was previously forecast (helping to explain the lower operating margin figure for 2017) and probably helped to increase aircraft retirements.

Rising oil prices have led to lower margin forecasts in the CAPA world airline operating margin model for 2018 and 2019, with declines from the cyclical peak of 2016.

Nevertheless, CAPA's forecasts predict that the current cycle will enjoy at least five consecutive years of margins at comfortably above previous cyclical peaks of 6% in the period 2015-2019.

Profitability in the airline industry still appears to be cyclical, but it has gone some way towards showing that it can maintain a higher midpoint of the margin cycle.

*IATA estimate for 2017e and CAPA forecasts for 2018f and 2019f.
Note: the figures on the chart indicate the year of each cyclical peak and the margin reached.
Source: CAPA - Centre for Aviation, IATA, ICAO.