Canadian airports: the ‘other’ London Airport is growing fast

While airports in London UK, collectively the world’s busiest, are having to deal with a succession of problems, Ontario, Canada's London Airport recorded an excellent year in 2019, and with all its airlines contributing to the growth.

London itself is a city-region of over 500,000 people, situated halfway between Toronto and Detroit, Michigan, in the U.S. and it has transitioned to become a digital technology hub, in addition to a being a focus city-region for life sciences and biotechnology. Southern Ontario is heavily populated generally.

The equidistance of the airport between two major centres of population, Toronto and Detroit, speaks well for London’s opportunity and could be advantageous, but it is not clear whether the airport can actually benefit from it.

The name London is hardly synonymous with the smooth operation of air travel just now. The UK’s six capital city airports, collectively the busiest aviation network in the world, are experiencing individual issues of their own, as is often the case.

At Heathrow, economic and environmental issues continue to bedevil efforts to build a third runway, and bookies are offering odds on whether it, or the high-speed rail project HS2, will be completed first; and in which decade.

At Gatwick Airport the debate has been whether a taxiway can be used as the ‘second runway’ that the world’s busiest single-runway airport failed to get government approval for.

At Stansted the management is pitted against councils and residents opposed to expansion and has postponed the launch of its GBP150 million arrivals terminal as it reviews plans “due to economic and political uncertainty.”

Luton Airport is also limited by local decree in how far it can expand, while London City faces a threat from Crossrail (the Elizabeth Line) when it finally opens.

Only fast growing Southend Airport – somewhat out in the boondocks on the Essex coast – can feel smug, but now its owner, Stobart Group, is caught up in the continuing Flybe financial debacle as a shareholder in that airline.

The Ontario airport records a 27% passenger increase in 2019, led by a ULCC

On the other side of the Atlantic, however, they are 'forever blowing bubbles' (to borrow football club West Ham United’s signature song), as London International Airport (LIA) in Ontario recorded a passenger increase of 27% year-on-year in 2019, becoming the second fastest growing airport in Canada.

The total number of passengers handled was 683,155. The growth was led by the introduction of Swoop, the Canadian ultra-low cost carrier (ULCC) headquartered in Calgary, Alberta, and a venture by WestJet, in response to growing competition in the price sensitive market following the proposed introduction of low cost Canadian brands such as FlyToo, NewLeaf, and Canada Jetlines.

Swoop is now the second largest carrier at LIA by seat capacity after Air Canada, with WestJet also an important player, then followed by Sunwing, which specialises in the vacation destinations across the Caribbean, Mexico, Cuba, Central and South America that are immensely attractive to eastern and central Canada citizens during the winter months. 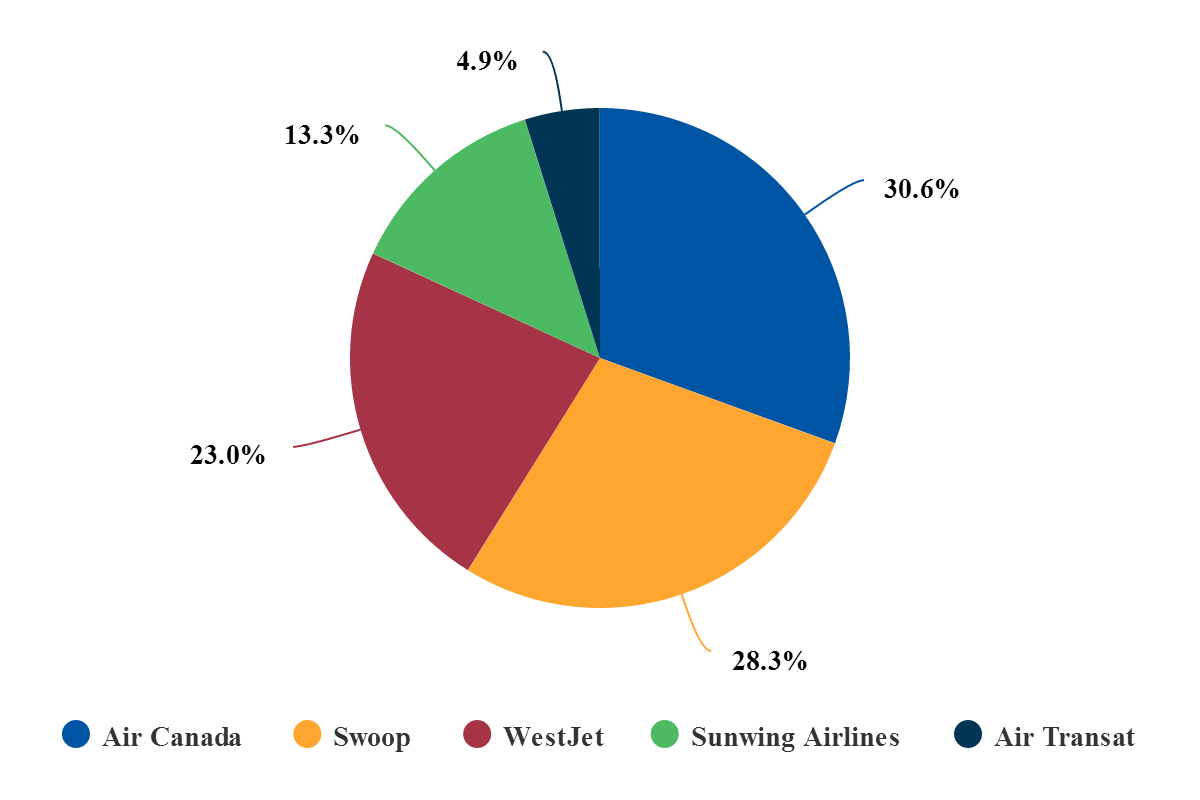 Swoop added services to seven destinations in Canada, US and the Caribbean during 2019, with WestJet, Air Canada, Sunwing and Air Transat also increasing services. All this made a major difference. Passenger growth figures in the previous two years had been just 1.4% and 2.9% respectively.

The airport’s route map shows that two regular scheduled destinations are in the southern U.S. (Las Vegas and Orlando) and six in the Caribbean.

LIA can hence be classified as primarily a ‘leisure airport’ – and almost two thirds of seats are on LCCs – but connections to Montreal, Ottawa, Edmonton, Calgary and Abbotsford in British Columbia keep London in contact with most major Canadian cities.

Toronto is not one of those domestic connections: the two cities are 190km (120 miles) apart, connected by rail and one of the major highways in the whole of North America, Highway 401.

A significant economic city-region, even if it is barely known outside Canada

London itself is a city-region of over 500,000 people, situated halfway between Toronto and Detroit, Michigan, in the U.S. Since the manufacturing crisis of 2009 it has transitioned to become a digital technology hub, in addition to a being a focus city-region for life sciences and biotechnology. Southern Ontario is heavily populated generally.

A small number of airports have evolved in southern Ontario to present a challenge of sorts to Toronto’s Pearson International, the busiest in Canada.

They include the Toronto John C Munro Hamilton International Airport, to the southwest of Toronto, which in the past three years has been very successful, handling almost one million passengers in 2019; and Region of Waterloo International Airport near Kitchener to the west, which has found the going to be harder.

To the southwest of London on the U.S. border is Windsor airport, one of two serving the cross-border conurbation of Detroit, Michigan and Windsor (the other being Detroit Metropolitan). The last passenger traffic statistics available for that airport are 331,000 passengers in 2016, a year-on-year growth rate of 21%.

All these airports are classed as an ‘airport of entry’ by Nav Canada and are staffed by the Canada Border Services Agency (CBSA).

Map – location of London vs. Toronto, Windsor and Detroit

All of which raises the question of where LIA goes from here? Airport president and CEO Mike Seabrook says the airport is looking forward to another record-breaking year in 2020.

There are growth opportunities domestically, regionally, and possibly further afield.

Growth can come by way of adding further selected Canadian, U.S., and Latin American services. There may be opportunities for some trans Atlantic ones.

The 2700m main runway could possibly handle long range 737 and A320/A321 versions at full load, and WestJet, which is extending its range of trans Atlantic routes this year, is a likely suspect to be approached for such routes. Norwegian is another possibility.

London is not as well situated for the UK diasporan market that settled to the west and north of Toronto as are Toronto Pearson, Hamilton and even Waterloo, but the equidistance of the airport between two major centres of population, Toronto and Detroit, speaks well for London’s opportunity. LIA could be compared perhaps to the airports between New York and Boston, which picked up Norwegian's trans Atlantic services, if only for a while.

What might hold LIA back is that Canada Border Services Agency officers can currently handle aircraft with no more than 180 passengers; however, they can handle up to 450 if the aircraft is unloaded in stages.

That situation might have to change if LIA is to raise its profile.