Canada’s airlines remain in a dangerous state of limbo

In the Americas, airlines outside the United States have, comparatively, received little government support, and in some cases restrictive border closures have hampered operators in working to develop a short to medium term recovery plan as some leisure demand starts to recover.

That is the case in Canada, where stringent restrictions have remained firmly in place since Mar-2020. The country’s airlines have repeatedly pressed the government to adopt a more science-based approach in the way that it navigates travel regulations during the COVID-19 pandemic, but so far no firm guidelines have been issued for changes in Canada’s travel policies.

Now, IATA has voiced concern that the prolonged restrictions could trigger permanent economic and social damage, and is urging Canada’s government to seek alternatives to the quarantine measures in place.

However, there is no guarantee that the government will heed the warnings of an industry in peril, and the result is Canadian operators remaining in an undesirable state of limbo.

Canada’s travel restrictions have not changed during the past six months, and they include blanket restrictions on all foreign travellers, the closure of the Canada-US border, and a mandatory 14-day quarantine rule for anyone entering Canada – including Canadians. There are also certain interprovincial restrictions in place.

Even with the restrictions, a few weeks ago Air Canada remarked that there were some signs of a domestic recovery; but the airline concluded that the market rebound would be uneven, given some of the regional restrictions that remain in place.

Air Canada also declared that during 2Q2020 Canada’s restrictions were contributing to the airline transporting less than 4% of the customers it carried in 2Q2019.

Porter Airlines, which caters primarily to business customers, halted its operations in Mar-2020, and has delayed its relaunch several times. Porter now intends to restart flights in Nov-2020.

After joining with other travel and aviation industry stakeholders to urge Canada’s government to find a responsible way to coexist with COVID-19 until there is a vaccine, Air Canada and WestJet have decided to start COVID-19 testing trails at selected airports to “help determine if an airport-based COVID-19 surveillance program is feasible, whether self-collection of COVID-19 testing is effective, and to explore options regarding the 14-day quarantine for international travel”, according to Air Canada’s trail partner McMaster Health Labs.

More recently, management at Air Transat has stated that while the company is supportive of putting public health first, “there could be a different approach to it”.

Executives from the airlines have highlighted a recent study that showed testing at airports in some countries has proved to be more efficient at reducing infections rates than quarantining. “Borders could be also reopened on a reciprocity basis”, said Air Transat.

Although Canada’s case counts have continued to rise, the country has one of the lowest case counts in the Americas, where respectively the US and Brazil hold the first and third spots of confirmed case levels worldwide, at 6.5 million and 4.3 million. Canada’s case count as of 14-Sep-2020 was 140,098.

However, Canada’s population is approximately 36 million, compared with a population of 328 million in the US. 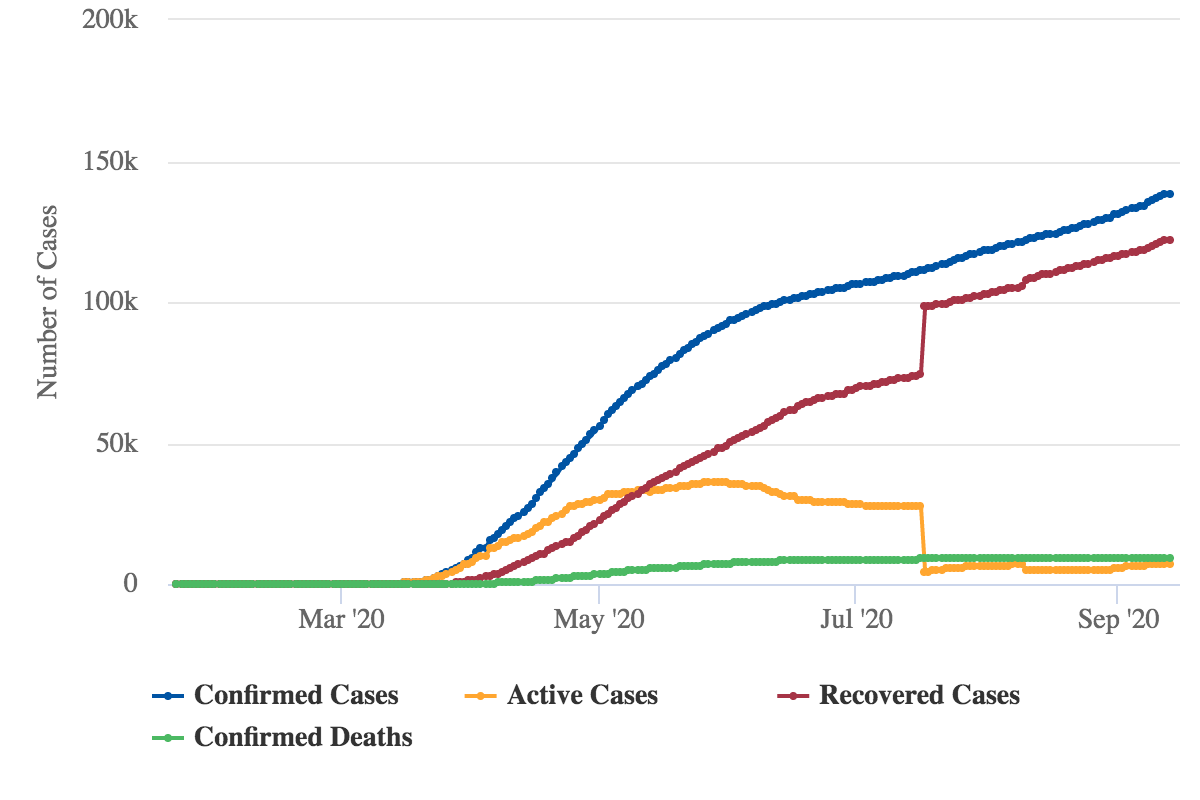 Previously, Air Canada’s management has stated that it does not expect the US-Canada border to reopen during 3Q2020. The current restriction ends on 21-Sep-2020, and there is widespread speculation that the government could extend the closure for another 30 days.

Canada’s quarantine measures have been extended to 30-Sep-2020.

IATA has calculated that Canada’s inbound international ticket sales remain extremely depressed – down by approximately 75% as of 10-Sep-2020. 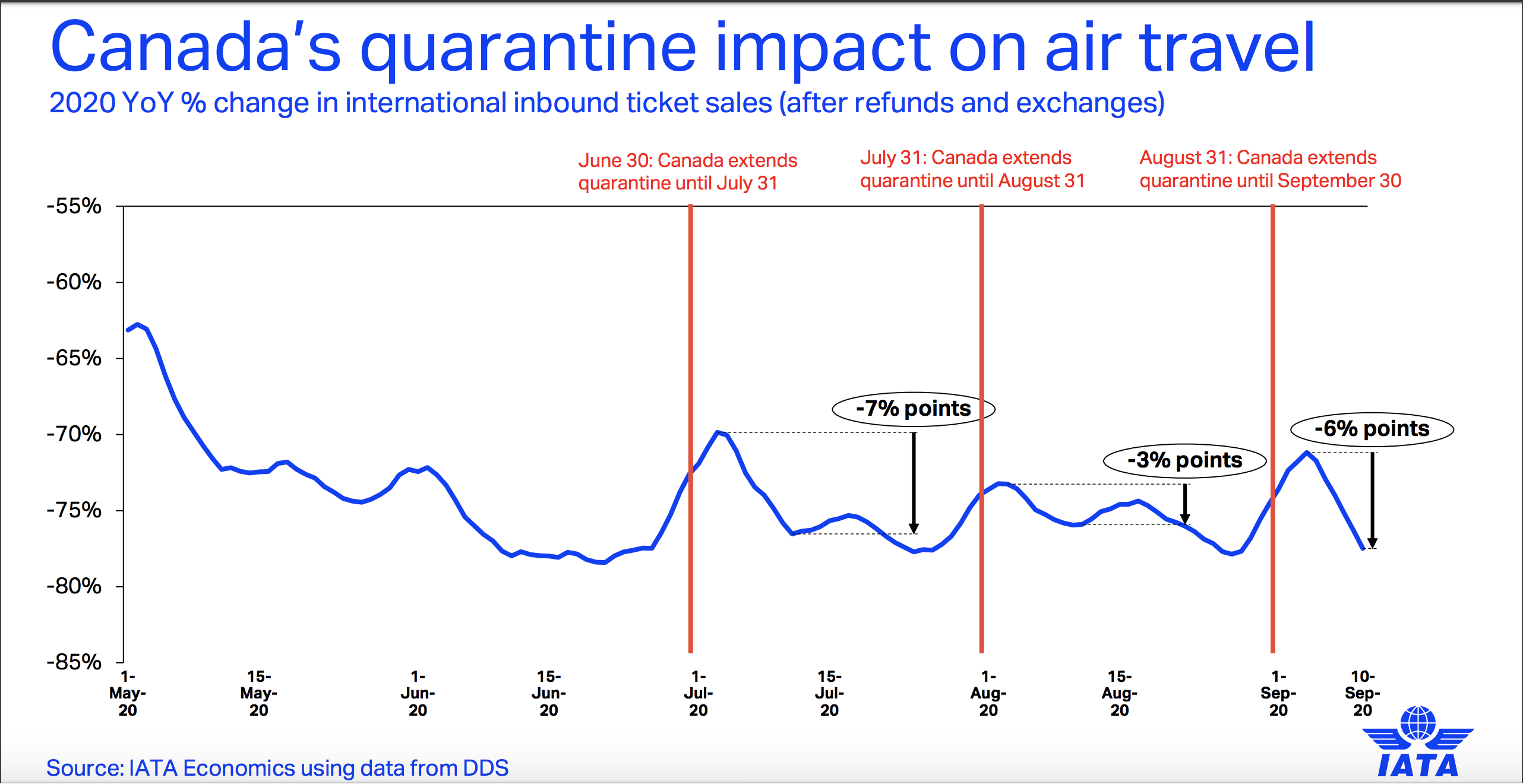 The aviation association is making a communications push on Canada’s government ahead of the expiration of the latest quarantine measures at the end of Sep-2020, noting that it estimates revenues generated by airlines with service to, from and within Canada could fall by 70%, approximately CAD22.6 billion, compared with 2019.

IATA also stated that 415,000 Canadian jobs and CAD39 billion of the country’s GDP were at risk.

During the time that Canada’s borders have remained locked down, the government has not offered financial assistance on the scale of what has been provided in the United States.

The airlines have received some employee payroll assistance, but no airline opted to participate in a loan programme offered by the government to companies with annual revenues of at least CAD300 million.

The scheme required firms to seek financing of at least CAD60 million, and companies applying for the aid would be subject to strict limits on dividends, share buy-backs and executive pay – which are essentially the standard stipulations for corporations seeking government aid in the wake of the rapid spread of COVID-19.

Air Canada ended 2019 with a cash balance of CAD6 billion, and has taken steps to push its liquidity well beyond CAD7 billion. But similarly to all airlines worldwide, Air Canada is aiming to reduce its cash burn, and some pent-up demand unlocked by relaxed travel restrictions could help move the needle to a lower burn level.

Jean-Marc Eustache, the CEO of Air Transat’s parent Transat A.T., has stated that while the company is grateful for payroll support, foreign competitors are receiving tremendous sector-specific support.

He warned that “we're not going to be on the same playing field with the others tomorrow when business will start again, because you see in U.S., they already put more than $50 billion”.

He highlighted the government support provided to Air France-KLM, British Airways and Lufthansa, and also the more than EUR2 million bailout for TUI, an organisation Mr Eustache described as “a little bit like us”.

The industry continues to wait on Canada to alter travel bans

Like all countries, Canada is attempting to balance public health and the economic fallout created by an unprecedented global pandemic.

As the crisis continues to create challenges for longer than expected, Canada’s aviation sector is pushing for changes in the government’s approach to travel requirements, but there is a real chance that the status quo could remain in place for the short term.