Canada’s second largest carrier WestJet is continuing to outline bold ambitions for 2014 after launching its regional subsidiary Encore in 2013, along with a new premium economy product and fare bundles designed to appeal to leisure and corporate customers alike.

So far WestJet has made nothing but positive declarations about Encore’s performance, which is the expected response from the early days of a new undertaking. But 2014 is the year when the industry is watching for meaningful trends to indicate whether Encore will deliver on WestJet’s expectations, which likely include obtaining a nice chunk of the USD2 billion value the carrier estimates that Canadian regional domestic and short-haul transborder operations fetch.

WestJet shows no signs of slowing down in 2014 as it marks the milestone of introducing its first long-haul international operation when new service to Dublin commences in Jun-2014. It has reportedly outlined encouraging booking trends on the new flights, and indicated more trans-Atlantic service may be in the offing. It is inevitable WestJet would set its sights on international service beyond transborder services, given the revenue potential and the opportunity to challenge Air Canada’s leading status in the international long-haul market.

Its sometime lookalike in the comparable Australian market, Virgin Blue/Virgin Australia, has undergone a complete transformation from LCC to full service airline so as to address this market segment. WestJet is taking a more cautious approach.

During 2013 WestJet juggled other substantial changes to its business outside of Encore. These included the introduction of a premium economy product and the creation of fare bundles to ensure it met the needs of its core base of leisure travellers while developing products attractive to higher yielding corporate customers.

After some teething pains among staff during the early soft roll-out of its premium legroom product, WestJet declared that its fare bundles during 2014 would reach the top-end of its previous revenue generation guidance of CAD50 million (USD47 million) to CAD80 million (USD75 million.

The carrier deserves some recognition for the seemingly smooth roll-out of Encore, given the short time frame (roughly a year) in which WestJet ordered and added a second fleet type to its operations and gained certification for its new subsidiary. Very early results of the Bombardier Q400 operation indicated Encore was exceeding initial expectations on a stand-alone profit and loss basis.

But Encore’s debut did pressure WestJet’s unit revenues during 2013. Its performance in that metric fell nearly 4% during 3Q2013 and 2% for 9M2013. The carrier’s yields during those same timeframes dropped 1.8% and 1%, respectively. WestJet has indicated it expects a flat unit revenue performance for 4Q2013, and has yet to supply its unit revenue outlook for 2014. Encore is slated to represent half of WestJet’s 4% to 6% system-wide capacity increase for 2014, and its shorter stage lengths have driven WestJet’s cost guidance for 2014 from flat to a 1% rise.

WestJet recently stated it would beat its previously stated goal of cutting CAD100 million (USD94 million) in annual costs by a year, meeting its target at YE2014. It is a positive sign the carrier is working to cut costs; however, in the short term it seems as if WestJet is willing to endure some short-term pain in order to broaden the scope of its business with the ultimate goal of gaining significant revenue gains in the long term.

Encore is moving eastward in 2014 into tough competitive territory

Encore’s expansion continues into 2014 as WestJet plans to end the year with 16 aircraft. By 2015 the carrier plans to accept all 20 Q400s from its original order placed in 2012, and it appears that it could also accept five additional aircraft during 2015 if it decides to convert a portion or all of the 25 Q400 options the carrier presently holds. 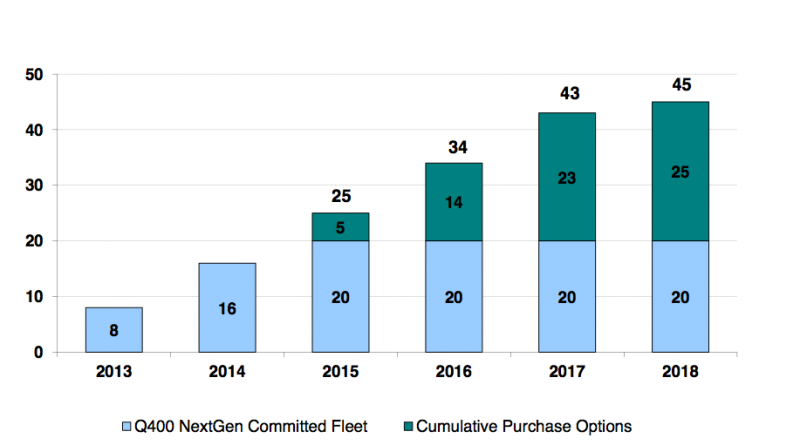 WestJet plans to migrate Encore eastward in 2014 as it previously stated it would establish a crew and maintenance base in Toronto late in the year (the base will likely cater to both regional and mainline operations).

At the end of 3Q2013 Encore was operating five aircraft on 42 daily departures to 12 destinations in Western Canada. The carrier planned to end 2013 with eight Q400s after accelerating a single aircraft delivery from 2014 to 2013.

Based on possible destinations outlined by WestJet, it is likely the carrier will convert some of its existing Q400 options. During 2013 it estimated roughly 20 points as potential new markets for the airlines, many of which are in eastern Canada and the northeastern region of the United States.

Encore's current and potential markets as of Nov-2013 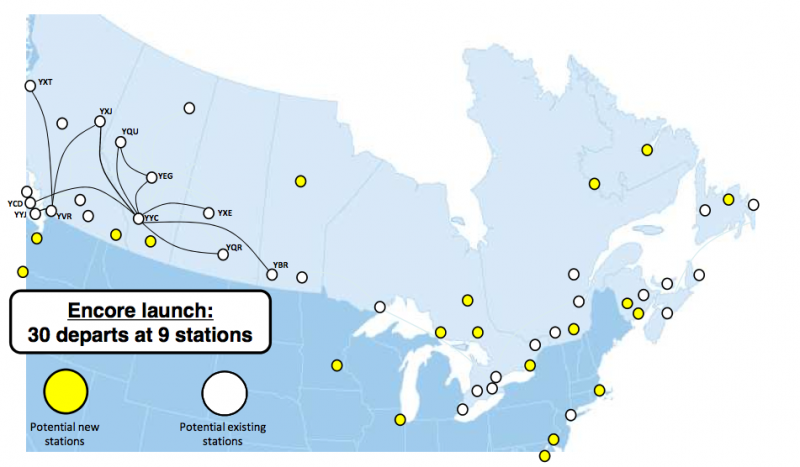 Prior to Encore’s launch Air Canada made a push into Calgary and Edmonton with Q400 turboprops. WestJet is no doubt preparing for a similar response as Encore moves into eastern Canada. As Air Canada is on somewhat stronger financial footing, it may have the means to act more aggressively on WestJet’s encroachment into its regional markets.

Any transborder expansion by Encore is not expected until 2015. But during the past couple of years capacity expansion and pricing pressure have created challenges on Canadian routes to the US northeast. Air Canada during 3Q2013 finally turned a corner in its transborder operations, posting 7% gain in unit revenues year-on-year and a nearly 5% increase in yields.

If WestJet introduces additional transborder capacity in 2015, the reprieve in competitive pressure could be short-lived for Air Canada, which prior to 3Q2013 posted largely negative results in the transborder space as it encountered overcapacity and dilutionary pricing in those markets.

WestJet CEO Gregg Saretsky recently told The Toronto Star that approximately 50% of the daily flights on WestJet’s planned Toronto-St John’s-Dublin service set to begin in Jun-2014 were already sold and that the carrier was “selling above our costs” on the seasonal service. Intriguingly sample online prices for WestJet's one-stop narrowbody operation tend to be similar to or marginally higher than rouge's widebody non-stop service. WestJet has reportedly hinted it could add other European cities to its network if the seasonal service to Dublin is a success.

See related report: WestJet dips a toe in the trans-Atlantic market with Dublin service; any prospective partners there?

Given that widebody slots are full at Airbus and Boeing for the next few years, WestJet’s examination of additional trans-Atlantic markets needs to fit the operating profile of the 737 narrowbody. That would likely limit the carrier to destinations in northern Europe.

The approach and timing WestJet takes to crafting a true trans-Atlantic operation are anyone’s guess. But if Dublin becomes viable for the carrier, perhaps Edinburgh could be a potential market under review. Both markets are Air Canada rouge routes from Toronto, so if WestJet concludes it can effectively compete with Air Canada in the Dublin market, perhaps Edinburgh would emerge as a safe gamble.

During the past year WestJet has stated it is evaluating widebody aircraft to possibly join the fleet in a five-year time period. It has held discussions with both widebody manufacturers, and the new service to Dublin allows the carrier at least some partial insight into the complexities of long-haul international service. 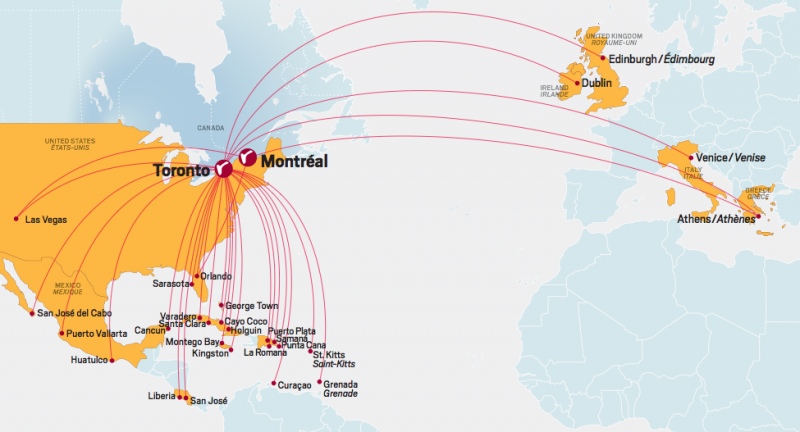 As Encore matures, WestJet will have a majority of Canada’s domestic space blanketed along with all the important US transborder markets. The next logical step is entering the long-haul, widebody market, which WestJet estimates has a value of CAD10 billion (USD9.4 billion).

With only one major Canadian scheduled airline accounting for a large majority of the market, WestJet has no choice but to examine ways it can create a successful strategy to penetrate long-haul international routes. Dublin is likely just the beginning. Presently, WestJet represents about 14% of the international seat deployment from Canada, versus 33% for Air Canada.

WestJet's former lookalike in the Australian market, LCC Virgin Blue, has completely transformed itself over recent years into a full service airline in order to compete more effectively across the board with the bigger player in the market, Qantas. Virgin Australia, as the full service model is now renamed, has in addition to its 737 fleet, five 777-ERs and seven A330-200 widebody aircraft (along with a regional fleet of ERJ-190s). But for international operations, its wider international strategy is to deliver a range of virtual service through (equity) partnerships with Etihad, Singapore Airlines and Air New Zealand.

WestJet has not followed this all-the-way metamorphosis, but it will be interesting to see how far the airline goes with its international partnering. It has an eclectic mixture of SkyTeam and oneworld codeshare partners (who compete with Air Canada's Star allegiances behind their Canadian gateways), but for example there has been no suggestion yet that any of its new international services will be more than point-to-point and independent of partner assistance. That could change, given the attraction of the long haul market potential. 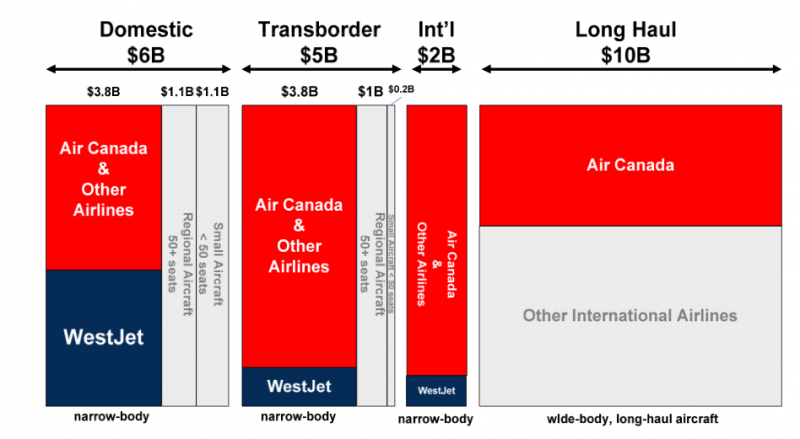 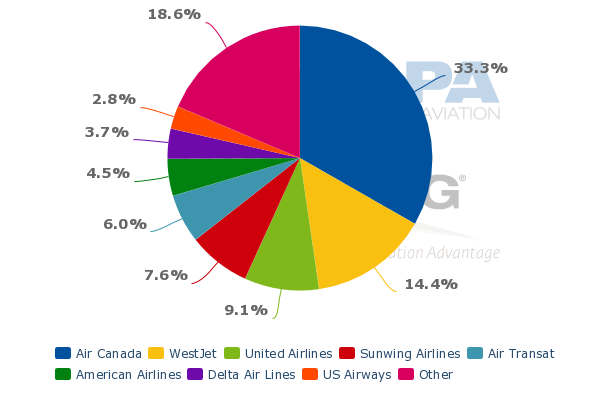 WestJet faces some labour tension as its ambition strengthens in 2014

WestJet has also recently stated some interest in slots at New York LaGuardia and Washington National airports freed up by the American-US Airways merger. The carrier already serves LaGuardia from Toronto and ties up with Delta at LaGuardia through a codeshare. National would be a key route for WestJet in its continuing efforts to capture corporate share, but it is not clear if foreign low-cost carriers are eligible to vie for the slots.

Additional service would add to an already heavy agenda WestJet has planned for 2014 – although the carrier seemed to execute successfully on most of its initiatives in 2013 while remaining profitable for the first nine months of the year, with net earnings of nearly CAD201 million.

There have been some flare-ups in WestJet’s labour relations, and unionisation drives are underway among the carrier’s pilots and flight attendants. So WestJet will need to devote some time during 2014 to ensuring the discontent doesn’t intensify amidst the major changes it has undertaken during the past couple of years. In the short term, the carrier must work out a new deal with its pilots after those crew members rejected a previous contract offer.

WestJet feels confident it can continue to juggle its ambitious business initiatives even as certain labour relations become more delicate. With its aggressive expansion continuing unabated in 2014, it is clear that WestJet needs positive sentiments among its employees now more than ever.

Note: This is the first in a two-part series looking at Canadian aviation prospects in 2014.