Canada aviation: from laggard to leader in pandemic management

Just a few short weeks ago Canada’s aviation sector was eagerly awaiting a reopening plan from the government after months of expressing ire over the government’s foot dragging on loosening restrictions enacted at the onset of the COVID-19 pandemic.

Now that Canada is open to all vaccinated travellers and vaccines mandates are becoming widespread, the country has leapfrogged into somewhat of a leadership position in the next phase of the pandemic as variants of the virus continue to emerge.

The government’s latest position is now drawing praise from the country’s second largest airline, WestJet, which believes that Canada has an opportunity to emerge as one of the safest countries for travel, which obviously bodes well for the country’s airlines.

Canada's capacity starts to climb as borders open up

As of 7-Sep-2021, Canada opened its borders to all vaccinated travellers after months of a patchwork of testing requirements, quarantine restrictions and mandatory hotel restrictions had left the country’s aviation sector inert.

The tight restrictions that remained in place for more than a year resulted in Canada’s government garnering its fair share of criticism.

Back in Jun-2021 the National Airlines Council of Canada (NACC) stated: “Unlike many other countries, including all other G7 nations, the federal government has yet to provide a clear restart plan outlining when and how major travel and border restrictions will be removed”. NACC represents Air Canada, WestJet, Jazz and Air Transat.

But now, Canada is turning a corner. Data from CAPA and OAG for the week of 13-Sep-2020 show the country’s system ASKs have climbed steadily since the announcement that Canada’s borders would open to vaccinated Americans on 9-Aug-2021, with a full reopening following in Sep-2021. 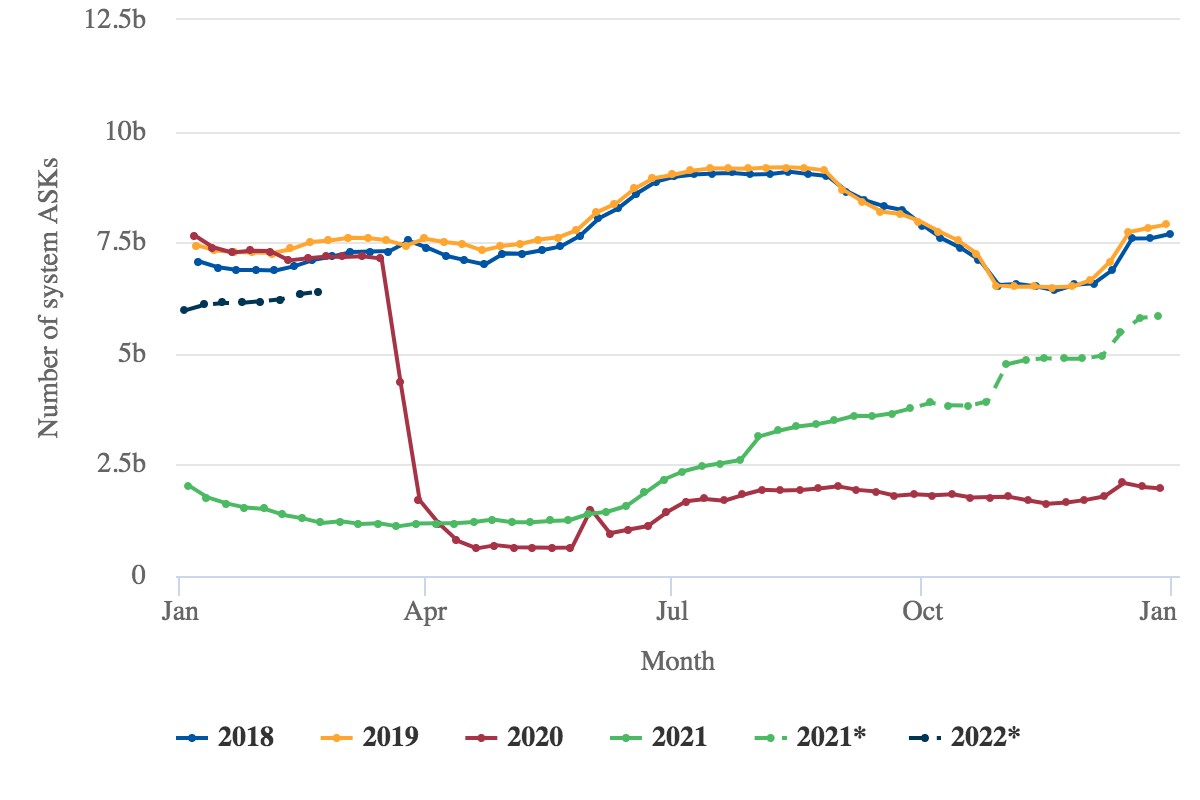 *These values are at least partly predictive up to 6 months from 13-Sep-2021 and may be subject to change.

Canada’s largest airlines are also slowly building back capacity after the softening of restrictions.

Air Canada’s systems ASKs are projected to jump more than 200% year-on-year by the end of 2021. 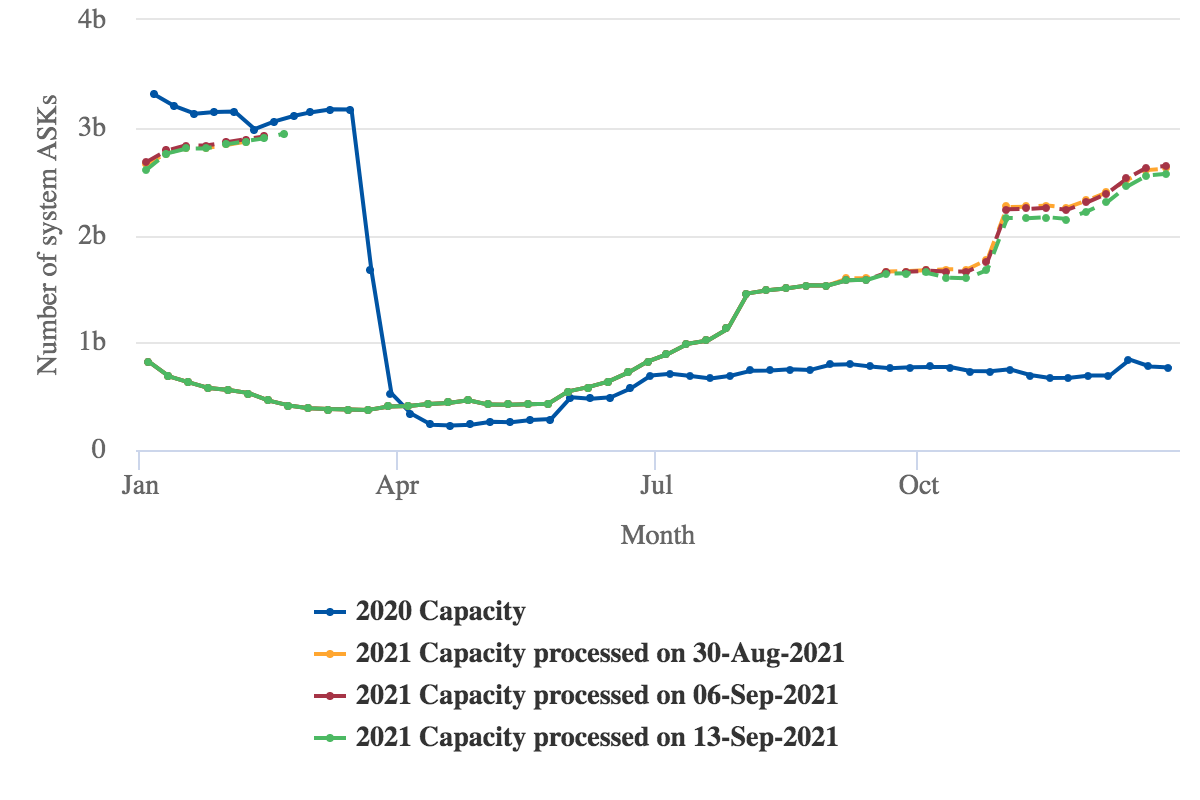 WestJet is also adding back capacity at a steady rate, also growing more than 200% at the end of 2021 compared with the same period in 2020. 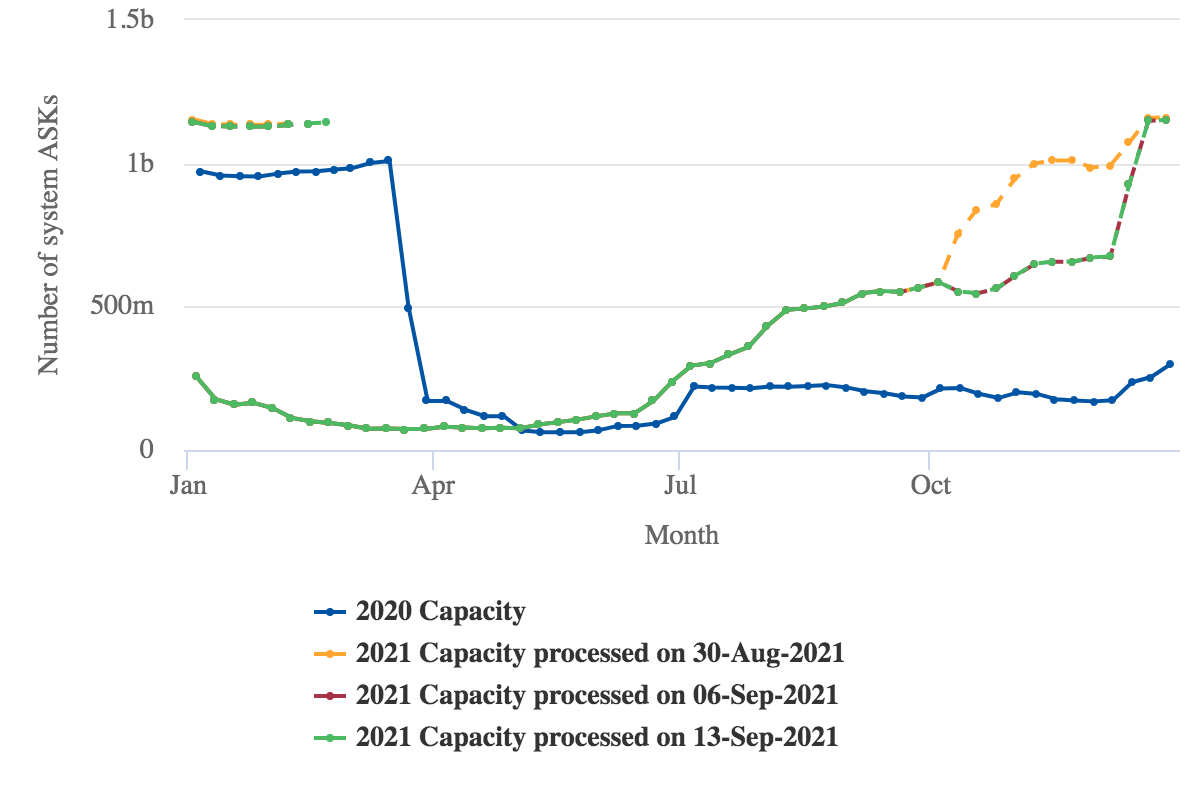 WestJet’s projected capacity has dropped slightly from 30-Aug-2021 to 13-Sep-2021, which could be driven in part by softness triggered by the Delta variant of COVID-19.

Due the Delta variant’s rapid spread, many US airlines have revised their 3Q2021 revenue expectations downward, and believe the delay office openings could delay the next phase of business travel rebound.

Both Air Canada and WestJet have been adding back international route pairings during the past few weeks in preparation for Canada lifting travel restrictions.

Air Canada has increased the number of routes it operated to Europe from eight in Jun-2021 to 19 in Aug-2021, and planned further resumptions after restrictions have been lifted for all vaccinated travellers.

WestJet is also building back its trans Atlantic markets. At the recent CAPA Live September conference WestJet company CEO Ed Sims explained that the airline was “trying to make sure we fly a broad swath of European destinations built around Central European hubs”.

Mr Sims cited WestJet’s recent launch from Calgary to Amsterdam Schiphol, which has “astonishing load factors.” The airline is also operating from Calgary and Toronto to London Gatwick, and between Calgary and Paris Charles de Gaulle.

That service gives WestJet the basis to start building back to destinations like Rome and Dublin, Mr Sims said, adding that the airline had recently announced plans to launch flights during 2022 from Toronto to Glasgow and Edinburgh operated by its Boeing 737-8 narrowbodies.

Mr Sims believes the modest business class cabin on WestJet’s 787 widebodies could be an advantage as the market recovers. The aircraft feature 16 seats in business class, and 276 in economy.

“There’s less emphasis for us or less obligation to fill those forward cabins and a greater opportunity I think to fill the aircraft with both VFR [visiting friends and relatives] and with leisure traffic”, Mr Sims explained. “So notwithstanding the Delta variant, I'm feeling pretty confident about the projections on the Atlantic.”

Is Canada set to emerge as a leader in pandemic management?

As WestJet rebuilds some of its long haul network, Mr Sims expressed some concerns over the Delta variant of the coronavirus, as well as the lambda variant “or whatever may come next,” but he also highlighted Canada’s vaccination levels. According to Our World in Data, approximately 69% of Canada’s population is fully vaccinated. WestJet’s CEO believes Canada could reach critical mass “north of around 70%” during the next couple of months.

He also explained that Canada had introduced “very timely legislation” that mandates that all federally regulated workers and domestic travellers be fully vaccinated by 31-Oct-2021.

“I think Canada has a wonderful opportunity to establish ourselves as one of the safest countries to travel to, from and within. That gives us a very strong platform on the Atlantic, where people are now so used to carrying a digital passport with a QR code to get access to a whole range of services", said Mr Sims.

WestJet, Air Canada and Porter Airlines have all recently issued vaccine requirements for their employees and those mandates, along with the government’s decision to require vaccinations for domestic travellers, do appear to give Canada an upper hand in getting the virus somewhat under control.

Canada’s decision to require vaccines for those travelling domestically is a significant step in the country’s recovery. It is also a decision that for various reasons will not be copied by other countries.

In a short period of time, Canada has transitioned from laggard to leader in managing a pandemic that shows little sign of ending for the foreseeable future.