In many ways, the Canada-Asia aviation market is a study in contrasts. Asia, particularly China, remains one of the fastest growing aviation markets worldwide, both domestically and internationally. Yet the yield on routes between Canada and Asia remains depressed, and overcapacity remains an overhang.

There are other market distortions that make it difficult to make profits on trans Pacific routes, including caps in the Canada-China bilateral.

Those market dynamics are resulting in Canada’s second largest airline, WestJet, adopting a cautious approach to determining the right time to launch trans Pacific flights. For now, WestJet does not have any immediate plans to enter the long haul trans Pacific market.

Most of the focus on the Canada-China market remains on origins in Western Canada, including Vancouver and Calgary. But Toronto and Montreal are also points of strength for airlines operating between Canada and Asia as ethnic populations continue to grow in those markets.

The Canada-Asia market is complex, with yields often suffering

IATA has determined that China will replace the US as the world’s largest aviation market by the mid 2020s, and India will take the third spot behind the US, replacing the UK.  Indonesia will oust Spain in the fourth spot.

IATA's projection of the 10 largest air passenger markets in 2037 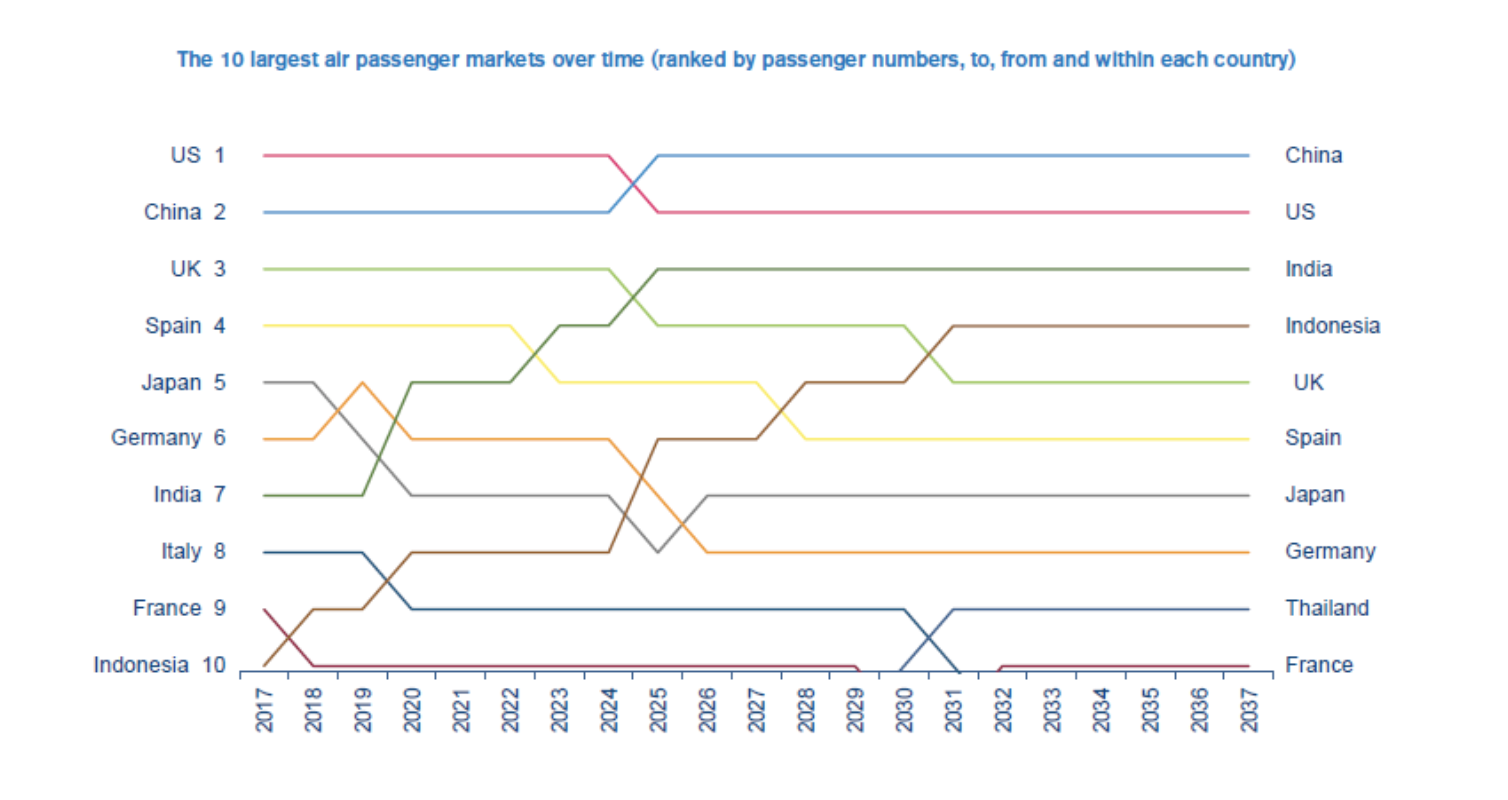 There’s no denying that airlines worldwide are working on their long term strategies for serving the Pacific, yet for now, overcapacity between North America and Asia is creating weak yields on those routes.

Those complicated dynamics apply to the Canada-Asia market, said Air China VP and General Manager for North America Zhihang Chi at the recent CAPA Canada Summit in Winnipeg. “There is a demand there, but then not a yield”, he said, noting that situation was creating challenges in “making a buck”.

The Canada-Asia outlook panel at the recent CAPA Canada Summit

He explained that even as the two airlines are in the early stages of their immunised partnership, there are signs that certain routes are stabilising. However, he remarked that over the long term there needs to be rationalisation in the market, and until corrections are made to some of its distorting factors, the Canada-Asia market will be a challenge for everyone to serve.

WestJet adopts a cautious approach to its trans Pacific strategy

When WestJet ordered its ten firm Boeing 787s in 2017, the company cited opportunities for expansion in Europe and Asia, and subsequently sought approval to launch flights from Canada to China.

But for now, WestJet is sticking to operating 787s on trans Atlantic flights from Calgary, Vancouver and Toronto to European destinations.

Although WestJet continues to examine service to Asia, company CEO Ed Sims recently told attendees at the CAPA Canada Summit the airline “will not fly profitless volume.” He explained that WestJet was not interested in a numbers game regarding load factor and bringing in substantial numbers of tourists that may not be adding “substantial economic value to Canada’s GDP.”

Overcapacity remains a challenge in the Asian market, said WestJet VP of Network and Alliances Brian Znotins, who joined Mr Sims at the event.  Capacity is outstripping demand, which is resulting in low fares in trans Pacific markets from Canada.

Noting that WestJet will launch services to Asia when capacity and demand reach a favourable balance, Mr Znotins said that there is “no level of profitability that capacity can’t kill.”

WestJet’s studies of the Asian market not only include potential service from Calgary and Vancouver, but also the viability of flights from Edmonton and other western Canadian cities, Mr Sims said. “We are doing deep analysis and deep modelling of the markets that provide as least as much value as they will volume, and we’re not going to rush into that decision,” he said.

Even as Vancouver remains a major gateway to Asia from Canada, Mr Chi remarked that Toronto has a big Chinese community and “demand there is very phenomenal”. He also stated that Air China’s service from Montreal to Beijing is “one of our better flights…Montreal really treats us pretty well”.

Mr Chi said that Montreal has a healthy mix of business and leisure traffic, and “generous immigration policies, more Chinese immigrants are actually going to Montreal”.

The bilateral agreement between Canada and China is complex and includes China’s 'one airline, one route' policy, and Chinese airlines have reached their service caps established in the bilateral with Canada. Meanwhile, Air Canada has struggled to gain favourable slot times at Chinese airports.

Data from CAPA and OAG show that Air Canada’s weekly ASKs to China had dropped nearly 15% year-on-year as of late Nov-2019. The airline is working to adjust its capacity in light of geopolitical conflicts and the trade spat, which are negatively affecting demand, and is allocating that supply to other markets. 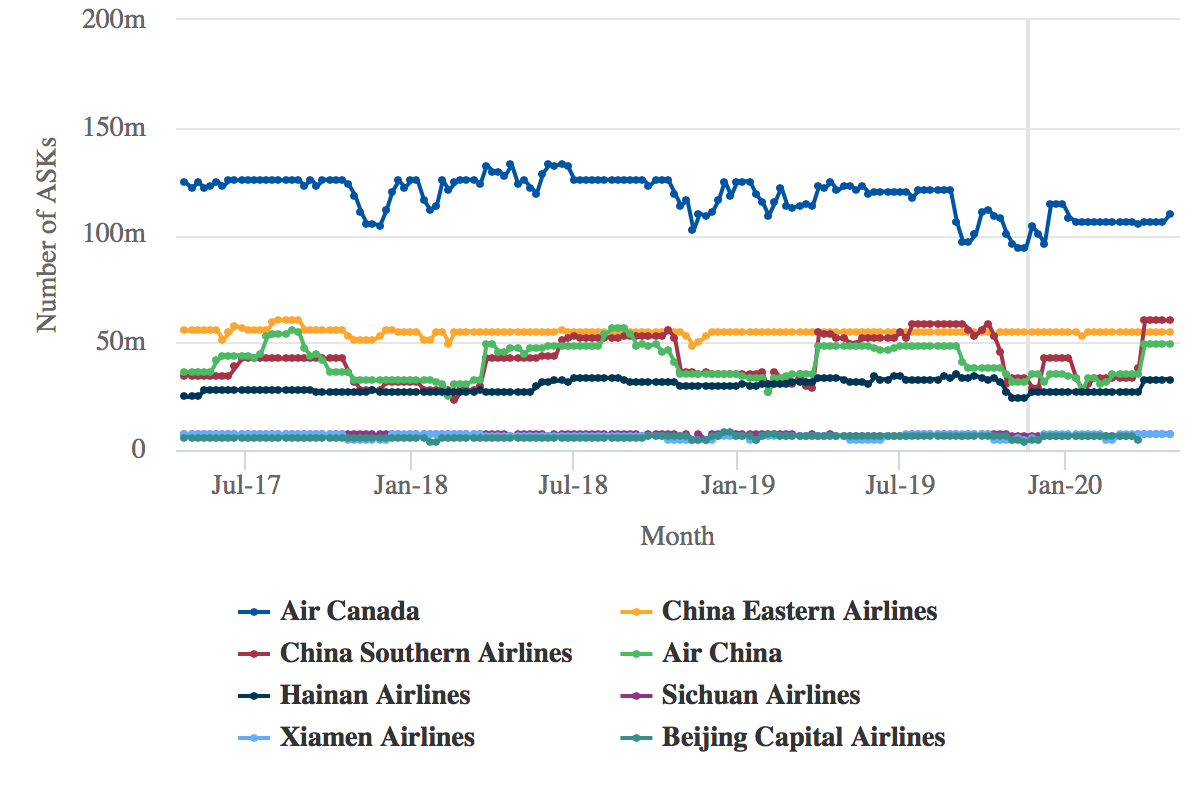 Both Air China and Air Canada obviously plan to use their JV to manage their respective capacity jointly, in line with demand, ultimately to improve yields. But at some point in the future the bilateral between Canada and China and other Asian countries could need to be revisited.

As markets evolve, traffic agreements from Canada to the Pacific should advance

There is no doubt that the market from North America to Asia will continue to evolve — traffic and commerce patterns dictate that will happen.

As those market dynamics change, there should be corresponding changes in agreements governing traffic flows from Canada and the US to Asia in order for routes in those markets to meet their full potential.