As Mumbai Airport prepares to issues tender documents for the airport retail concessions at the new integrated Terminal 2 (T2), due for completion in September 2013, we consider the prospects for the airport to replicate the massive growth in retail revenue achieved at Delhi Airport since the opening of Terminal 3 (T3) in 2010. The improved retail performance has resulted from a combination of strong traffic growth and increased spend per passenger as a result of a significantly enhanced retail and food and beverage offer. As we examine in this article, in the case of Mumbai Airport retailers will need to place their primary focus on enticing passengers to spend more as the potential for traffic growth is limited by physical constraints.

In 2006, the Government of India awarded long term concessions for Delhi and Mumbai Airports to private joint venture operators, who were required to commit significant investment to upgrade and modernise the airports to international standards. Over the last five years, these two airports have delivered substantial improvements to the passenger experience. Delhi Airport built a ‘temporary’ domestic terminal 1D which has proved to be an efficient facility that is liked by both airlines and passengers. This was followed in 2010 by the opening of the flagship T3, integrating international and full service domestic operations under one roof.

One of the largest terminals in the world, T3 was successfully commissioned within an aggressive timescale of just over three years, and has an official capacity of 34 million passengers p/a. Modern terminal infrastructure, combined with three runways, has improved the operational performance of the airport (although there remain numerous areas for further improvement) and created new hub opportunities for Indian carriers. As can be seen in the chart below, Air India in particular has been strongly shifting its capacity away from Mumbai and towards Delhi following the opening of T3. The airport’s attractiveness has been further enhanced by the opening of an express metro link to central Delhi and several major new hotel projects are under development in the airport precinct. Retail spend has increased dramatically as we will review in a future article.

Change in Air India’s weekly domestic and international seat capacity at Delhi and Mumbai airports (Nov-2011 vs Jul-2010, the month prior to the opening of T3) 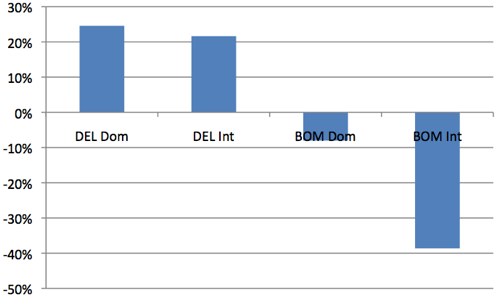 Until recently, Mumbai's Chhatrapati Shivaji International Airport (CSIA), gateway to the country’s commercial and financial capital, a metropolitan region of 20 million, was India’s busiest. The city is the headquarters for more of India’s listed companies than any other, which accounts for the fact that the city reportedly contributes 40% of the income tax collection across the country.

The consumption potential of the market is very strong both in terms of middle class and high net worth individuals, a positive driver of traffic and spend per head. According to Forbes, in 2011 Mumbai had the sixth highest number of billionaires of any city in the world. CAPA spoke with several country heads of foreign carriers, who confirmed that Mumbai has the strongest premium market – although Delhi is seen to be catching up fast. This is reflected in the fact that Mumbai Airport has the highest proportion of international first and business class seats in the country at 12.7% of capacity.

Market data suggests that Mumbai CSIA should be one of the most exciting airport retail opportunities in the world. India’s traffic growth and Mumbai’s consumer profile make for a compelling combination. But, only one of these drivers will be available beyond the short term.

The primary challenge for Mumbai CSIA is that the airport is approaching saturation. The modernisation of the airport has been extremely challenging due to it being one of the most land constrained airports in the world measured by passenger traffic per acre of land. Mumbai Airport has just 36% of the land area of Delhi Airport despite having comparable traffic volumes. The operator has managed to deliver significant improvements to the existing facilities, whilst simultaneously handling strong growth in traffic and constructing a massive new terminal T2, despite having virtually no room to move. When T2 opens in 2013, this integrated domestic-international terminal, which will have capacity for 40 million passengers per annum, will finally bring world class facilities to Mumbai.

This is an impressive feat, but there is nothing that the operator can do to change the size and shape of the site it has inherited, which ultimately places constraints on future growth. The airport has a cross runway operation with no possibility of building a new parallel runway. And air navigation services are not under the control of the operator, but instead are managed by the state-owned Airports Authority of India. Runway capacity in terms of aircraft movements per hour is well below international benchmarks and slots are virtually exhausted for 19 hours per day.

CAPA estimates that even after improving airside and airspace efficiency, the airport may only be able to handle around 36 million passengers p/a assuming current average passengers per movement. Higher load factors and the deployment of larger aircraft (e.g. introducing widebodies on some domestic sectors and permitting foreign carriers to operate A380s) could increase the capacity further, but overall it may well be the case that runway restrictions kick in before the terminal capacity of 40 million is reached.

In the 12 months to 31 March 2011, Mumbai Airport handled 29 million passengers. Growth in the first half of FY2012 was 7.7%. If this rate of growth was to continue (which is relatively low by recent standards) Mumbai Airport would be completely saturated and closed to any additional services by 2014/15. The slot constraints are already impacting growth and as can be seen Delhi Airport is starting to build a lead in terms of traffic volumes.

Uncertain impact of second airport on passenger profile at CSIA

The construction of a greenfield second airport at Navi Mumbai (NMIA) has been repeatedly delayed and CAPA estimates that this new facility is unlikely to open until 2017/18. Mumbai as a city therefore faces the prospect of three to four years during which it may simply be impossible to increase air capacity, an issue which has serious economic implications.

From the perpsective of the retail concessions at CSIA, this means that on the one hand the base level of traffic at the airport seems assured in that demand is likely to exceed supply, but on the other there are limited prospects for growth in traffic beyond 2014/15. In order to generate topline growth the emphasis will therefore need to be on innovation to increase spend per head, which will require detailed research and understanding of the customer in order to present a product offer that appeals to the passenger segments passing through the airport.

Retailers will also need to consider, for example, the possible scenarios that may eventuate with respect to the distribution of traffic (e.g domestic/international or low cost/full service) between CSIA and NMIA, when the latter eventually opens. As the more centrally located airport, will CSIA primarily become a hub for domestic operations, along the lines of New York La Guardia or Washington National, with intercontinental services moving to the more distant NMIA? And as a convenient, slot constrained airport, will CSIA emerge as a premium facility with higher charges, leaving low cost carriers to move out?

The market forces that will determine these outcomes will themselves be dependent upon whether the two airports will be under common or competing ownership. Meanwhile broader issues such as the timing of the development of ground transport infrastructure to access the new airport will also influence the distribution of traffic. All of these factors will have a significant impact on the profile of passengers that will pass through CSIA in five and ten years from now and the retail opportunity at the airport.

The retail offer at Mumbai has faced a couple of challenges in recent times. Firstly, the current retail space is temporary as all of the operations will move in due course to the new T2, which limits the investment that can be made in the present location. And secondly, the award of the current concession did not proceed smoothly. The initial successful bidder, Aldeasa-ITDC, withdrew from the process after concluding that it had overbid. Mumbai Airport then selected DFS, only to be faced with a legal case from Flemingo challenging the manner in which it was excluded from the tender. While the uncertainty continued, the operation faced a number of logistical issues due to political and union intervention.

Eventually DFS and Flemingo formed a joint venture and the concession could finally concentrate on developing the business after having lost two to three years. A variety of stores have been opened and the results have been positive. Domestic retail has also improved after changes were made to the terminal layout to provide greater visibility to the new stores. Mumbai generates 55% of its retail revenue from Arrivals, compared with 70% in the case of Delhi, which is interesting in that Mumbai has a higher proportion of Indian nationals passing through the airport (70% compared with less than 60% at Delhi) who tend to purchase on their return home.

The high share of Indian passengers is one of the reasons why it is not possible to simply transplant international concepts into the market, it requires careful research into the key drivers of consumer behaviour, particularly in light of the vast differences in the travel experience of passengers through the airport. India has high net worth individuals who travel overseas several times a year, but there is, and will remain so for many years to come, a large cohort of passengers who are only just starting to travel overseas for the first time.

CAPA has recently concluded an extensive passenger survey to specifically address the paucity of research that exists in what is a complex and dynamic sector. The survey was unprecedented in its scope and scale, covering almost 8,000 passengers across 10 key aviation markets in India, namely Delhi, Mumbai, Bangalore, Chennai, Hyderabad, Kolkata, Pune, Ahmedabad, Cochin and Amritsar. We set out to capture the diversity of passenger profiles across Indian airports which vary by region of India, type of journey (domestic or international), stage of journey (arrivals v. departures), the nationality of travellers (India vs foreign visitors) and by market segment (business, leisure, labourer, VFR).

Mumbai has many of the characteristics that should make it the jewel in the crown of Indian airport retail concessions. But the issue of constraints on traffic growth, and perhaps even more importantly, that of traffic distribution when the new airport opens, will have a significant influence on the retail revenue potential. This does not necessarily make the opportunity less attractive, as stated Mumbai is an exciting consumer market, but maximising returns will require strategic innovation, an in-depth understanding of the prospects for aviation development in the city and detailed research on consumer preferences and behaviour.

Detailed analysis on the retail prospects for Mumbai Airport, as well as nine other leading airports in the country can be found in CAPA’s forthcoming India Travel Retail Report 2012. The report is designed to deliver a comprehensive perspective on the structure and performance of the sector today and the outlook for 2020, combining analysis of the aviation sector, interviews with key industry stakeholders and extensive consumer surveys and focus groups. For more information please download the attached brochure, or contact Binit Somaia on bs@centreforaviation.com.