Cambodia continues to experience rapid traffic growth driven by surging demand from China. Passenger traffic in Cambodia has grown at a rate exceeding 10% for six consecutive years, including 13% in 2015.

China has been the biggest driver of growth, with Chinese visitor numbers increasing by at least 20% for six consecutive years. Capacity on the traditional route to Bangkok, the main gateway for long haul passengers heading to or from Cambodia, has also grown over the last year.

However, the rate of passenger growth in Cambodia slowed significantly in 2015, particularly at Siem Reap. Cambodia is still one of the hottest markets in Southeast Asia but neighbouring Vietnam is now expanding faster. Growth is expected to slow further in 2016, and will likely fail to reach double digits for the first time since 2009.

This is the first in a series of reports on Cambodia. This instalment will examine the overall growth in Cambodia’s international market, while the next report will focus on the colourful Cambodian airline sector.

Cambodia Airports handled 6.47 million passengers in 2015, representing a 13% increase compared with 2014. Cambodia has now undergone double-digit growth for six consecutive years, making it consistently one of the fastest growing markets in Asia. 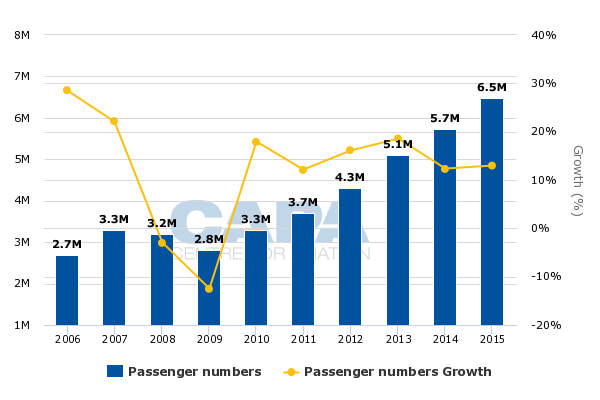 Cambodia Airports manages all three of Cambodia’s commercial airports. Siem Reap, a popular tourist destination famous for its temples, overtook the capital Phnom Penh as Cambodia’s largest airport in 2012. The third airport at the coastal resort town of Sihanoukville is tiny, with fewer than 100,000 passengers handled in 2015.

Siem Reap recorded 9% year over year growth in 2015 to 3.297 million passengers while Phnom Penh recorded 16% growth to 3.079 million. This marks the first time since 2009 that Phnom Penh had faster growth than Siem Reap. In 2009 both airports saw their traffic decline – with a larger dip for Siem Reap – as the global financial crisis impacted inbound visitor numbers. 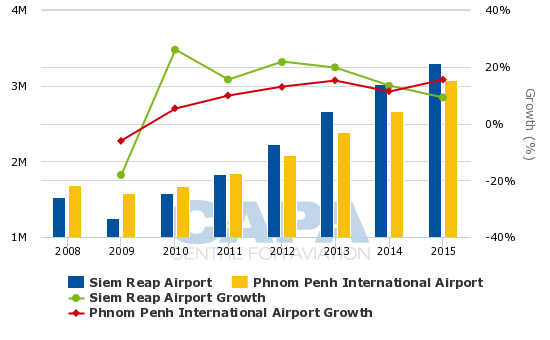 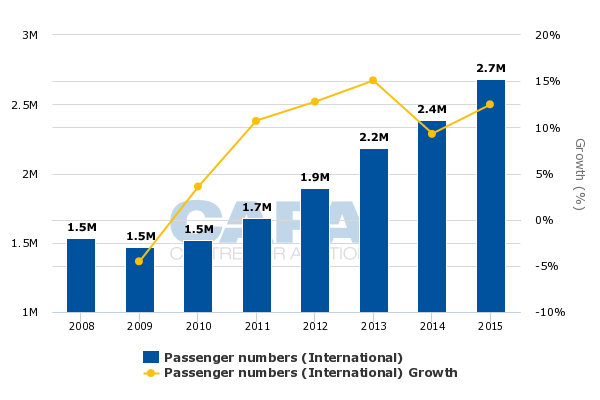 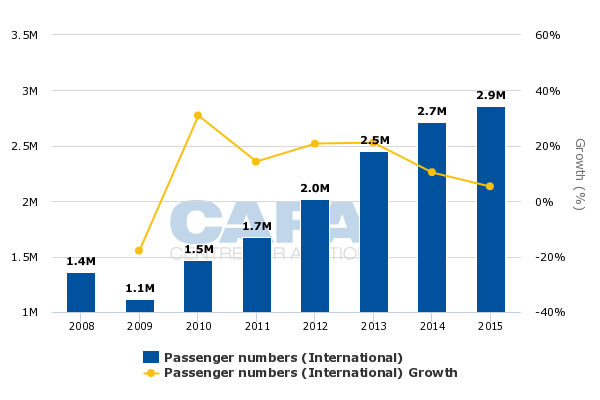 Overall, domestic traffic accounted for 13% of Cambodia Airport’s throughput in 2015, or 846,000 passengers. Cambodia’s domestic market has grown much faster than the international market, although on a much lower base, including approximately 50% growth in both 2014 and 2015. The domestic market, which consists mainly of foreigners flying around Cambodia, will be analysed in more detail in a subsequent report in this series.

Siem Reap relies almost entirely on inbound leisure traffic. It is a highly seasonal market, with peak months recording up to twice as many passengers as off-peak months.

Phnom Penh is a more balanced market with a mix of inbound leisure, inbound business and outbound traffic. There is roughly 20% more traffic in the peak season than in the off-peak months. 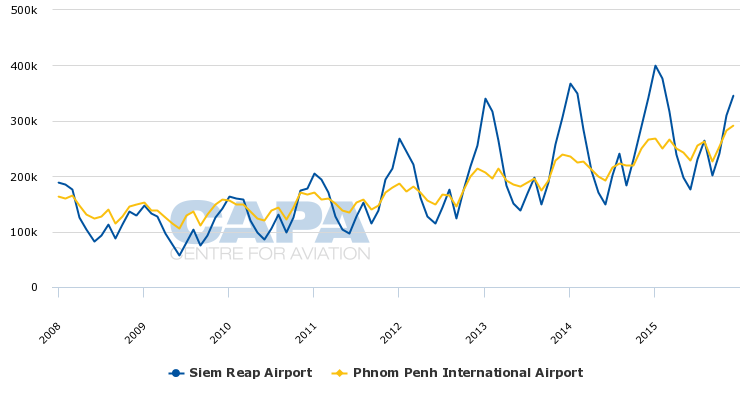 This includes business visitors and tourists, but approximately 95% of all visitors to Cambodia are on holiday. Tourist traffic is less seasonal at Phnom Penh as it is a more popular year-round destination, with its casinos being a particularly big year-round draw.

China has been the biggest driver of growth at both of Cambodia’s main airports. Visitor numbers from China have increased fivefold since 2009, when Cambodia recorded only 128,000 Chinese visitors.

Cambodia’s Ministry of Tourism has not yet reported full year data for 2015. However, visitor numbers from China for the first 11 months of 2015 were up 24% to 508,000. Annual growth almost certainly exceeded 20% for the sixth consecutive year. 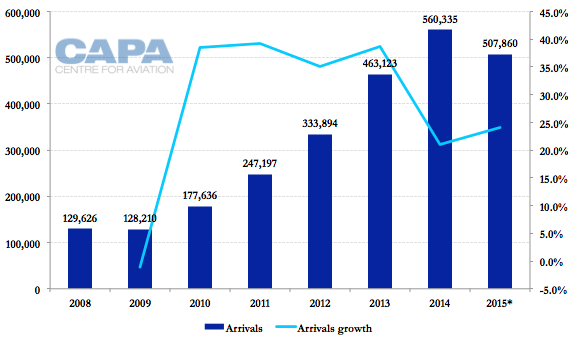 Note: 2015 figure is for first 11 months only as full year data is not yet available
Source: CAPA – Centre for Aviation and Ministry of Tourism Cambodia

Two other neighbouring countries, Laos and Thailand, are also large source markets for Cambodia, accounting for 8% and 7% of all visitors. Again, a large portion of Lao and Thai residents travel to Cambodia by road. Overall, 44% of visitors entered Cambodia by land in the first 11 months of 2015.

South Korea currently accounts for 10% of international seat capacity in Cambodia, compared with 17% for China. Three years ago Korea had significantly more capacity than China. 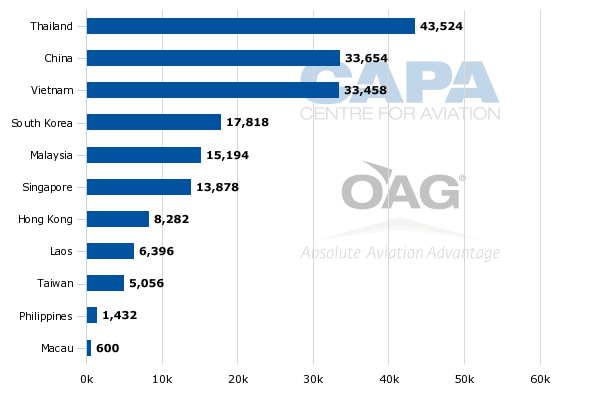 Thailand is now the largest international market from Cambodia in terms of scheduled seat capacity, having recently overtaken Vietnam. Cambodia-Thailand capacity is currently up more than 20% year over year, while Cambodia-Vietnam capacity has decreased slightly.

Cambodia is connected with four Vietnamese destinations but only one in Thailand. Bangkok is by far the largest international destination from Cambodia, accounting for almost 25% of total international seat capacity (this includes both Bangkok airports).

Bangkok is a large local market from Cambodia but most passengers flying from Phnom Penh or Siem Reap to Bangkok are travelling beyond Thailand. Bangkok Airways and Thai Airways particularly rely heavily on connecting traffic.

Bangkok Airways is the second largest foreign airline in Cambodia after Vietnam Airlines, currently operating six daily flights to Phnom Penh and five daily flights to Siem Reap. The sixth Phnom Penh frequency was added in early 2016. Cambodia is Bangkok Airways’ largest international market, with most passengers connecting at Bangkok to its foreign partners, including all three Gulf airlines.

Qatar Airways is the only airline from the Middle East – or anywhere outside East Asia – serving Cambodia. But its Doha-Phnom Penh service is operated via Ho Chi Minh, and a large portion of Qatar’s Cambodia passengers travel via Bangkok on Bangkok Airways.

The AirAsia Group, Bangkok Airways and Vietnam Airlines all have approximately 12% share of Cambodia’s international market. The Thai Airways Group has an 8% share, followed by Singapore Airlines regional subsidiary SilkAir with a slightly more than 5% share. SilkAir and Jetstar Asia (which has almost a 3% share) both serve Phnom Penh and Siem Reap from Singapore with significant transit traffic beyond Singapore.

China Eastern and China Southern have become the sixth and seventh largest foreign airline groups in the Cambodian market, just behind SIA/SilkAir. Both have expanded over the last year and currently account for approximately 5% of total international seat capacity in Cambodia.

Total seat capacity to China is up over 20% year over year, while capacity to South Korea and Taiwan has been relatively flat. The 20% increase excludes charters, which account for a large and growing portion of passengers in the Cambodia-China market.

Dragonair had been the only airline with nonstop flights from Hong Kong to Cambodia and currently operates one daily flight to both Phnom Penh and Siem Reap. Hong Kong-Cambodia is a relatively small local market, with only 12,000 Hong Kong residents visiting Cambodia in the first 11 months of 2015. Hong Kong based airlines therefore rely heavily on transit traffic – generally other parts of North Asia, in particular mainland China.

Vietnam Airlines has reduced capacity slightly to Cambodia over the last year while the total market has increased in size. A year ago, in early Feb-2015, Vietnam Airlines had almost a 15% share of international seat capacity in Cambodia.

Of the top 10 international routes from Cambodia, only Siem Ream to Hanoi and Ho Chi Minh have experienced a decrease in capacity over the last year. There have been large increases on both Bangkok routes and Singapore-Phnom Penh and, not surprisingly, the largest gain has been on the Siem Reap-Shanghai route.

The Vietnam Airlines Group is still by far the largest player in the Cambodian market as it has a 49% stake in flag airline Cambodia Angkor Air, which accounts for another 12% share of scheduled seat capacity in Cambodia’s international market.

In the next report in this series CAPA will examine Cambodia Angkor Air and Cambodia’s other airlines, which primarily operate charters and are planning to expand in 2016 with a focus on China.