Brussels South Charleroi Airport (BSCA) is aiming to handle 10 million passengers per annum by 2025. Most European airports that are attuned to handling budget carriers only, even on the fringes of large conurbations, count themselves lucky to put 1-2 million passengers through each year.

BSCA has benefitted enormously from the decision by Ryanair in 2000 to make it that carrier’s first-ever international base, and also from the vast army of international public sector workers in Brussels (as well as attendant lobbyists and journalists) – it is estimated that there are 70,000 international workers domiciled in Brussels.

Twenty years after Ryanair declared BSCA to be its first international base it is pertinent to examine which other airports that are primarily LCC bases or are major airports served by LCCs in Europe have achieved five million annual passengers and which might achieve 10 million ppa.

This report examines how the Belgian airport has achieved its success and also other such airports in Europe – they are few in number – that can claim to have matched or bettered that success.

BSCA was Ryanair’s first international base; at the heart of Europe’s ‘political capital’

Passenger traffic has been increasing consistently since 2014 (-5.1%), at between 2.5% and 5.4% per annum, but the lower figure shown in the graph below is the one recorded in the eight months Jan to Aug-2019, which is the most recent period reported.

The 2018 total was just over eight million. 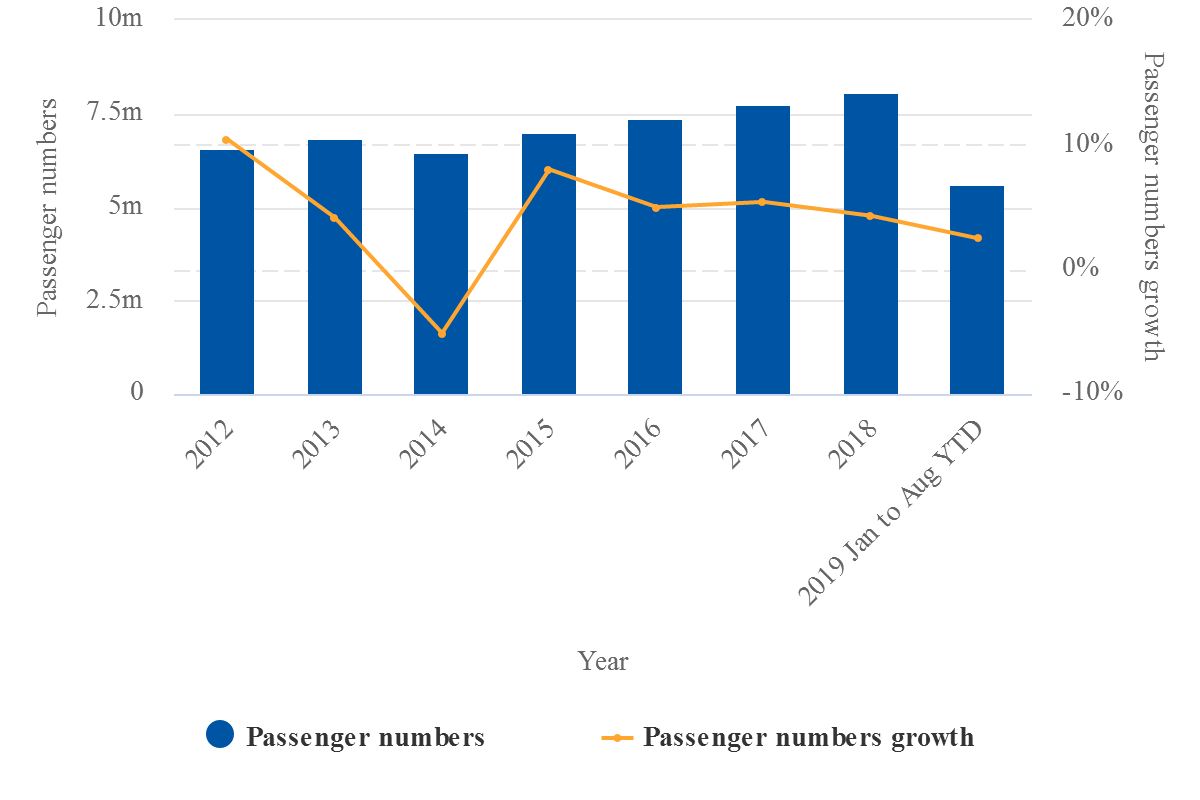 BSCA has benefitted enormously from the decision by Ryanair in 2000 to make it that carrier’s first-ever international base, and also from the vast army of international public sector workers in Brussels (and attendant lobbyists and journalists) – at the European Union and at other organisation such as NATO, the World Customs Organisation and Eurocontrol, all of which are headquartered in the city. Not to mention the European or World headquarters of many commercial organisations.

It is estimated that there are 70,000 international workers domiciled in Brussels, most of whom will have ample discretionary spending power for foreign trips by air, in addition to any requirement for work-related travel.

BSCA might have grown more quickly had Brussels Airport not opted, a few years ago, to seek to attract LCCs, which now account for more than 16% of seat capacity.

Indeed, Ryanair is the second largest carrier there now, after Brussels Airlines, accounting for almost 10% of capacity itself –although Ryanair will reduce capacity there, with only three aircraft instead of four, in line with its difficulties concerning the Being 737 MAX.

This does not mean that Ryanair has forsaken BSCA. It still has 77% of the capacity there, supported as it has been for many years by Wizz Air. 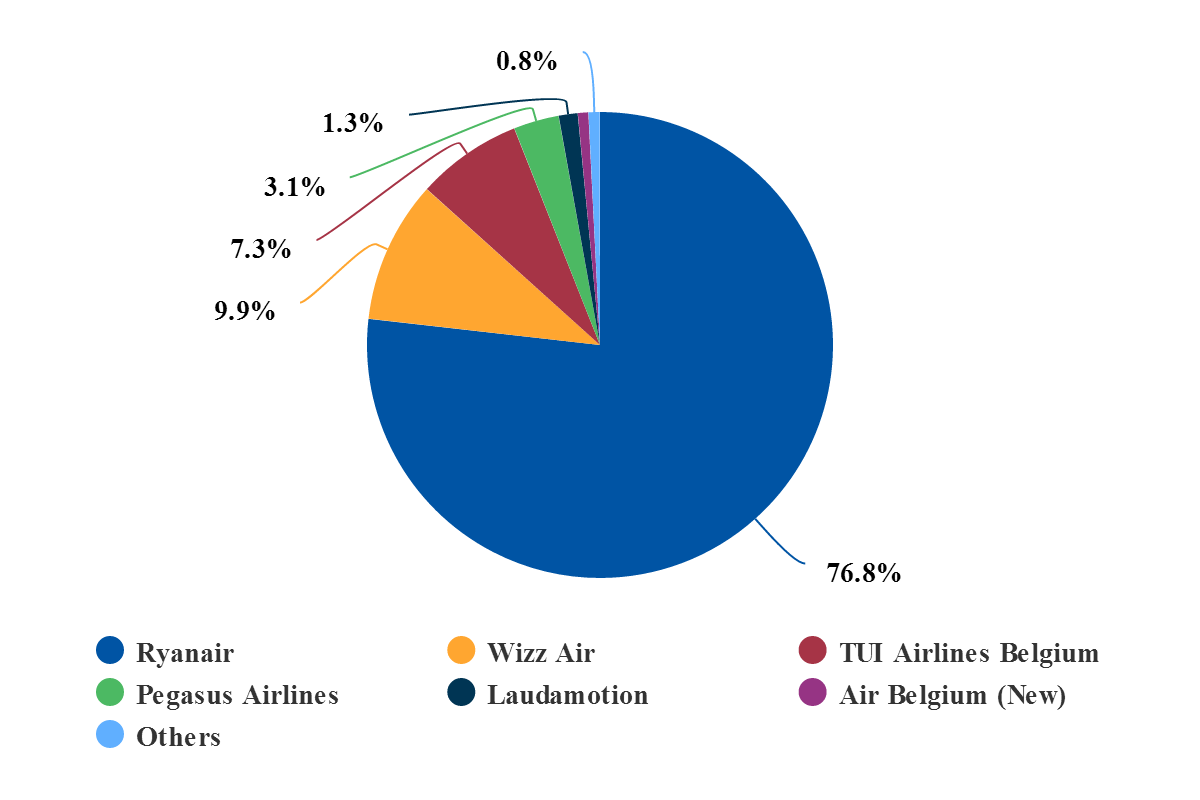 Of the other carriers in the chart above, most are starting new services this winter.

Wizz Air launches a twice-weekly Kutaisi service and Laudamotion a six times weekly Vienna service, one which Mr Verdonck of BSCA has described as "consolidating our position as an international airport".

The stop-start Air Belgium could also launch other long haul services. The airline has been leasing aircraft out but is the recent recipient of investment funding from the Belgian/French fund Sogepa (Société wallonne de Gestion et de Participations) following a positive appraisal of the airline’s BSCA to Fort-de-France (Martinique) and Pointe-à-Pitre (Guadeloupe) routes.

Air Belgium’s outlook is uncertain, but could offer a much-expanded long haul network from BSCA

Air Belgium, which in 2017 first notified its intention to set up a base at BSCA rather than at Brussels Airport, has been instrumental in driving infrastructure developments at BSCA.

Interestingly, another reason for the runway extension is so that airlines can add some cargo to their services “to help make them profitable”. Few of the LCCs operating at BSCA have cargo high on their agenda.

Few other airports with an LCC focus have achieved five million annual passengers.

Twenty years after Ryanair declared BSCA to be its first international base it is pertinent to examine which other primarily LCC bases or major airports served by LCCs in Europe have achieved five million annual passengers and which might achieve 10 million ppa, especially if they have invested in LCC-specific terminals or other facilities.

In order to qualify for this list, apart from the 5mppa requirement, at least 50% of an airport’s capacity has to be on LCCs and it does not include those airports which never ‘made it’ as LCC-oriented facilities (and some of which closed down altogether).

*3 Based on present growth rates.

The truly successful low-cost European airports can be identified from this list and there are surprisingly few of them.

Eight airports have made it to 5mppa; three have achieved 10mppa. Of the other five, two probably won’t achieve that figure – at least in the foreseeable future – and the other three might do between 2022 and 2025, assuming recent growth rates continue.

Left out of this list, because they haven’t achieved 5mppa (most are in the two million+ category), are significant airports such as Glasgow Prestwick (Scotland’s main LCC airport); London Southend (fast-growing but still well off the pace); and Paris Beauvais-Tillé (possibly too isolated).

Despite the impact LCCs have made in Germany recently, only Berlin Schoenefeld has passed the 10mppa barrier

Apart from Berlin Schoenefeld, which will soon become a terminal of another airport, no other airport in Germany qualified, including the secondary, low-cost airports for Munich, Frankfurt and Düsseldorf.

None qualified from Spain either, which is home to the biggest catastrophe in low-cost airport development in Europe – the Ciudad Real airport.

Nor the major secondary airports around Stockholm (Skavsta), Oslo (Sandefjord); nor Warsaw’s Modlin Airport, nor Bratislava, just down the road from Vienna.

Some of these are in public ownership, others are private, or they are ‘hybrid’. It does not seem to matter.

The conclusions that can be drawn for the few really successful ones are that (a) they stuck to their ‘low cost’ remit – hardly any capacity at BSCA, Luton, Liverpool, Schoenefeld, Milan Bergamo or Ciampino is not low cost, and (b) they serve large, heavily populated urban regions with sprawling catchment areas.