Brussels Airlines reduces its losses, but yields fall as Ryanair and Vueling enter its Brussels hub

Downward pressure on pricing looks likely to intensify in 2014: Brussels Airlines is accelerating its capacity growth, particularly on its long-haul (African) network, and its hub has seen the entry of LCCs Vueling and Ryanair. Its previous target of returning to profit in 2014 may now be in doubt.

Meanwhile (and as predicted by CAPA), Lufthansa allowed its call option over the 55% of Brussels Airlines that it does not already own to lapse in Apr-2014.

However, this load factor still looked low by comparison with the roughly 80% industry average, offering significant scope for improvement.

This year, the airline's passenger growth rate has accelerated. In the first six months of 2014, Brussels Airlines (hereafter referred to by its IATA code 'SN') recorded a 10% increase in passenger numbers to 3.1 million. This growth has mainly been driven by long-haul, where the rate of increase has been comfortably higher than 10%.

SN's 1H2014 passenger load factor gained 1.6 ppts to 69%. Although this increase is to be welcomed, the load factor remains well short of the industry average and a long way below the LCCs that are increasingly competing with SN.

According to a press release from Brussels Airlines in early 2014, it will operate 2,486 additional flights and 400,000 additional seats this summer by comparison with summer 2013.

On its European network, it has a total of 51 destinations (week of 4-Aug-2014, source: OAG), including 11 newly launched this summer: Alicante, Athens, Bari, Bastia, Cagliari, Figari, Krakow, Malta, Montpellier, Seville and Warsaw. It also added frequencies on routes such as Catania, Faro, Florence, Lisbon, Madrid, Malaga, Marseille, Palermo, Marrakech and Stockholm Bromma and reopened Porto as a summer route.

Outside Europe, SN has 19 destinations in Africa, two in North America (JFK and Dulles) and one in the Middle East (Tel Aviv). On Luanda (Angola) and Bujumbura (Burundi), it increased the number of weekly flights to three from two and added a fifth weekly flight to Nairobi (Kenya).

SN's charter activity focuses on Mediterranean destinations on behalf of Belgian and other tour operators, its largest customers being Thomas Cook and Club Med. It also offers holiday flights from French and Swiss airports. In total, 1,044 holiday flights were planned for this summer season.

SN's growth in 2014 is, in part, a response to an attack on the core of its business at its Brussels hub. Following the entry of LCCs Vueling and Ryanair into the main Brussels airport this summer, SN's share of seats at the airport has fallen to 29% for the week of 4-Aug-2014, from 36% in summer 2013 (sources: OAG and Innovata).

Ryanair now has 6% and Vueling 4% of seats at Brussels Airport. SN's share is by some distance the lowest of any 'national' carrier in Western Europe at its home hub. 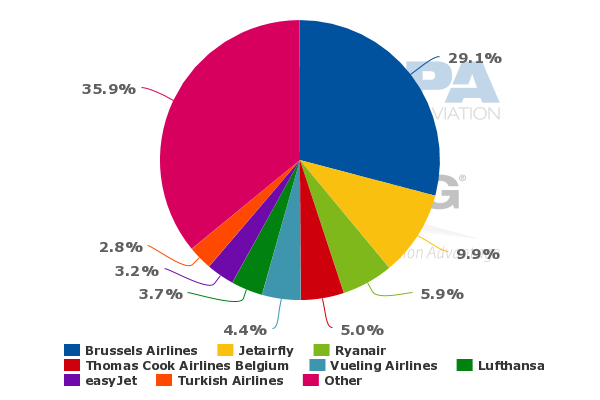 Moreover, if Brussels South Charleroi Airport is also taken into account, SN's share of seats in the Brussels airport system is only 23%. Ryanair has been well established at Charleroi and has almost the same number of seats at Brussels' number two airport as SN has at the main airport. Ryanair's entry into Brussels Airport means that it now matches SN's seat capacity in the Brussels system as a whole. 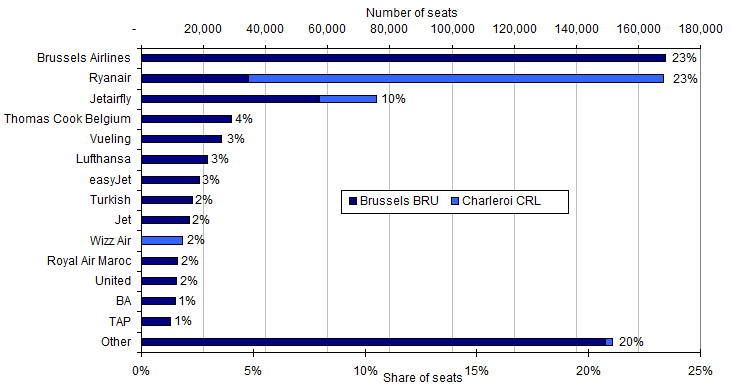 LCC competition is intensifying: 38 out of 51 European city pairs 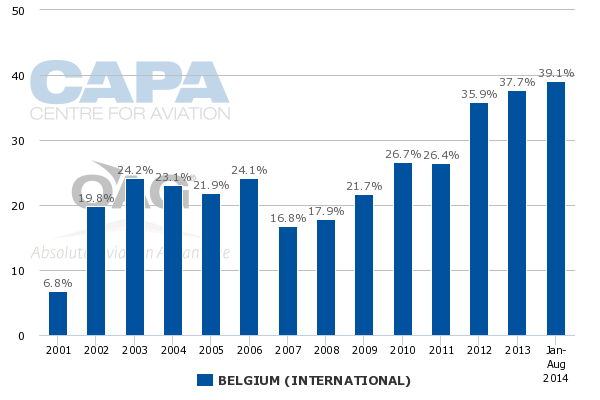 Out of SN's 51 European destinations, it now has LCC competitors on 38 (based on city pairs), according to our analysis of schedules data from OAG for the week of 4-Aug-2014. Moreover, the LCC competition includes three of Europe's four biggest LCCs (Ryanair, easyJet and Vueling) and SN frequently faces more than one LCC competitor on the same city pair.

Vueling also operates 11 routes from Brussels Airport, competing with SN on seven of these. SN goes head to head with easyJet on eight city pairs. Jetairfly competes with SN on four city pairs and Wizz Air on two, both of these two LCCs operating from Charleroi.

Brussels Airlines routes with LCC competition on the city pair

Ongoing pressure from LCC competition has forced SN to unveil a new commercial strategy. On 15-Jul-2014, it announced changes to its product and pricing, signalling a more concerted embracing of the so-called 'hybrid' model.

This approach attempts to combine elements of both the LCC and the FSC models, based on market segmentation and price discrimination. It adopts an 'unbundling' policy on pricing, charging separately for different elements of the service if passengers do not want an all inclusive ticket, while still offering a bundled service to those who are prepared to pay.

In the case of Brussels Airlines, it will (from 1-Sep-2014) offer four products, or fare categories, named check&go, light&relax, flex&fast and biz&class. These four replace its previous three ticket types, which were b.light economy, b.flex economy+, and b.business

SN, which has also introduced a new slogan ("We go the extra smile") said that its four new products were the result of a year of research. It also plans to launch a new frequent flyer programme by the end of 2014.

The company's statement announcing the changes said that "Brussels Airlines positions itself as a hybrid airline which offers a high value for money solution for all market segments and budgets, without having to compromise".

Offering four fare categories instead of three does increase its ability to segment the market, but it is difficult to see how SN is fundamentally differently positioned compared to previously.

Brussels Airlines’ transition to a hybrid carrier is compatible with parent Deutsche Lufthansa AG’s plans to amalgamate its European point-to-point services under the ‘WINGS’ brand, according to CCO Lars Redeligx (Het Laatste Nieuws, 15-Jul-2014). Mr Redeligx said: “What we are doing is perfectly in line with WINGS. We have implemented the core elements of it already. There is no other airline in Brussels to compete with us.”

Since our last CAPA Analysis report on Brussels Airlines in late Jun-2013, its fleet has grown by a net two aircraft to 46 as at 8-Aug-2014. The fleet and the changes since then are summarised in the table below.

Losses narrowed in 2013 as CASK fell faster than RASK

In 2013, Brussels Airlines continued to be loss-making, although it managed to reduce its operating loss by 69% to EUR28 million. Revenues were up 2.2%, in line with passenger growth but slower than ASK growth, while costs fell by 3%.

In spite of a 4% increase in average trip length, driven by long-haul expansion, revenue per passenger was only just better than flat at EUR194. This illustrates pricing pressure in SN's markets and is further highlighted by a 3% fall in total revenue per ASK (RASK).

The operating loss was narrowed in 2013 because cost per ASK (CASK) fell at the faster rate of 8%. SN's relatively low passenger load factor offers scope to increase RASK and revenues, if it can maintain yields, without a commensurate increase in CASK and costs.

This reduction in CASK reflects efforts by management to reduce costs under its performance improvement plan 'Beyond 2012-2013', which aims for a EUR100 million cost reduction. In particular, labour costs fell by 7% in 2013 and all measures of labour productivity improved, including a 9% fall in employee costs per passenger (see table below).

But SN's CASK is still much higher than competing LCCs'

SN's 2013 CASK of EUR8.25 cents puts among the more cost efficient European 'flag carriers', taking account of its average trip length. However, it is more than twice the CASK of Ryanair and Wizz Air and roughly 40% higher than that of Vueling and easyJet. It has a longer average trip length than these LCCs, which (all other things being equal) ought to give it a lower CASK.

SN's check&go product, with fares starting at EUR69, is clearly aimed at competing with LCCs, but it is unlikely to be profitable at that fare. Ryanair and Wizz Air have average costs per passenger of less than EUR60, while cost per passenger for Vueling and easyJet is in the mid EUR70s and SN's short-haul cost per passenger must surely be considerably higher than EUR69.

Of course, EUR69 is only the starting fare and check&go is only the entry level product, but this highlights that SN will not be able to compete with LCCs on price. Further reductions in its losses (and a return to profit) will consequently continue to depend on cost reductions and, on the revenue side of the equation, on the perceived quality of its service and product/network.

The latter includes its African route network, in particular Central/Western Africa, where SN is the number two airline from Western Europe (behind Air France). As CAPA said in Jun-2013, however, Africa provides SN with an interesting niche, but this looks vulnerable to rapidly growing competitors and those that also offer more global destinations to African passengers. Moreover, Europe accounts for more than 80% of SN's seats (week of 4-Aug-2014, source: OAG) and so the battle with LCCs remains crucial.

This leaves open the possibility that it might not achieve a profit this year, although it would not be the only European FSC to see its targets slip. Competition has increased since the programme was launched and this has put pressure on revenues.

Lufthansa acquired its 45% stake in SN in 2009 and had an option to buy the remainder from 2011 until it lapsed in Apr-2014. Its decision not to acquire the remaining 55% of SN does not signal that Lufthansa has no strategic interest in it: indeed, there has been considerable cooperation, including codeshare agreements, FFP integration and a project to optimise neighbourhood traffic between Brussels and other Lufthansa Group hubs.

Nevertheless, with LCC competition intensifying and financial results still far from sustainable profits, the future for Brussels Airlines is a little less certain than it was when it still had the prospect of becoming a fully fledged Lufthansa subsidiary.