British Airways takes a beating as Iberia positions itself for merger

A spot of public posturing on the likely split of ownership of the proposed British Airways-Iberia merger did little to help BA's share price yesterday, leading the airlines down with a 7.2% fall. The sick UK economy also contributed, helping helping also to drive easyJet's market cap down 6.8%.

In the course of reporting on results for the first three quarters of calendar 2008, Iberia's Chairman, Fernando Conte, casually observed that "(t)here are still some difficulties and one of them is BA's pension deficit but we are confident we will be able to reach a successful agreement for both parties, although it will take some more time and will likely have an impact on the relative value of both companies."

He also noted that "the deal...is a complex process and it is crucial that it is well designed to fulfil the expectations of both companies".

Since BA's share price has slumped and as stock market movements have diluted its contributions to its staff pension plan, Iberia has been making increasingly bullish noises about its shareholding in the merged airline.

Iberia meanwhile managed a small operating loss of EUR16.1 million for the first nine months. Its fuel costs for the period were up EUR374.2 million on last year's nine month total of EUR1,201.4 million. In 3Q08, the carrier lost EUR152,000, against an operating profit of EUR205million in 3Q07.

ASKs were up 1.1% while RPKs fell 0.5%, leaving a still-high 80.8% load factor. Some reduction of domestic capacity resulted from last year's optimisation programme, while increasing long haul and central and eastern European service. The extent of the carrier's transformation can be seen in the year-on-year 12.4% increase in its average stage length, to 2,246km, with long haul now accounting for 63% of total RPKs.

Iberia and BA's route structure do show good symmetry, but it would be valuable for each to restrict their negotiations to private levels, even if driving BA's share price down seems to work well in the short term. Anything that substantially delays the coming together will be in neither's interests. Iberia's shares, after a good beginning also ended the day down, by 1.2%. 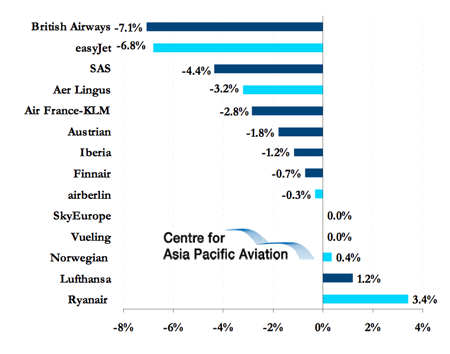