British Airways adjusts its post-Qantas JSA Asian network and partnerships; Qatar Airways to be next

Asia was the storied stopover point on British Airways' services to Australia, which for 18 years from 1995 until 2013 were operated in partnership with Qantas under a Joint Services Agreement (JSA). But markets and allegiances change. As the JSA lost emphasis, and ultimately was dissolved, BA has moved to adjust its Asian network. Whereas BA in 2000 had 40% of its 60 weekly flights to Asia/Australia covered by the JSA, in 2014 it has only 8% of its 120 weekly Asia/Australia flights in a joint venture – and these are now to Japan, in partnership with Finnair and Japan Airlines.

BA's Asian points are now almost entirely point to point destinations, although some stopover traffic persists. Since ending of the JSA with Qantas, BA has reduced Bangkok from a 747-400 to 777-200 service, while Singapore will change to a daily A380 and 777-300ER flight and Hong Kong a daily A380 and 777-200 service. BA reports that in six months it has seen a GBP30 million improvement on its Sydney route, the second most improved route in the BA network. But this is due to a number of factors – aircraft and crewing – not related to the end of the JSA.

Like others, BA will rely increasingly on partnerships and JVs, Cathay (and still Qantas) included. And opportunities with its new oneworld partner, Qatar Airways, are yet to be exploited.

Around 2000 during one of the renewals of the BA-Qantas JSA, BA and Qantas mooted the possibility of BA flying from Hong Kong to Australia as well as Japan to Australia, but neither ever materialised. 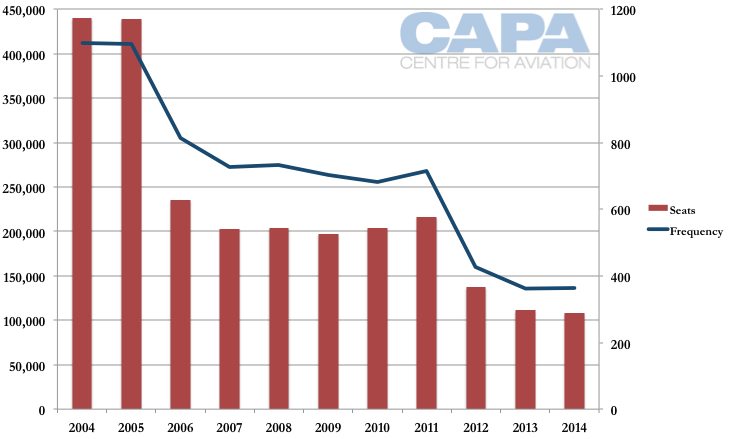 While BA has seen a sharp fall in Australian capacity, it is still at least standing, a feature of its corporate profile needs; with Virgin Atlantic's May-2014 withdrawal from Australia, British Airways becomes the only European carrier to regularly serve Australia.

See related report: And then there was one: Virgin Atlantic's withdrawal leaves BA as only European airline in Australia

BA in Nov-2013 reported that in the six months following the BA-Qantas JSA ending in Mar-2013, BA's Singapore-Sydney routes managed a GBP30 million profit improvement year-on-year (exact profit/loss was not disclosed). This is no small sum. In comparison, Virgin Atlantic said its Hong Kong-Sydney route was losing around AUD10 million (GBP5.5 million) a year.

BA was eager to promote its ability to stand on its own after the Qantas partnership, but this figure includes other ingredients, as BA made structural changes to the route that impacted profit. This included switching from 747-400 to 777-300ER equipment, so that capacity decreased 11% but unit revenues improved by 29%. BA's 777-300ER seats the same as the 747-400 it used, but with a much lower operating cost. First and economy class have the same number of seats while the 777-300ER has fewer business seats and more premium economy seats.

BA also deployed its Mixed Fleet cabin crew, which brought cost savings, and negotiated discounts with Singapore Changi and Sydney airports, according to BA Director of Strategy and Business Units Lynne Embleton. BA also had greater control over Australian sales whereas at the end of the JSA it was primarily Qantas managing ex-Australia passenger flows. So substantial improvements to the route were not possible only because the JSA ended.

As for BA's access in Australia, its own Singapore-Sydney fares remain very low while codeshares on Qantas, including to other Australian cities, significantly increase the price; it can be cheaper to purchase a separate Singapore-Sydney BA ticket and Qantas domestic flight than using a Qantas codeshare. BA maintains codeshares from Singapore and Bangkok to Australia on Qantas, except for Singapore-Perth, which Qantas is discontinuing. BA also has codeshares via Hong Kong with Cathay Pacific. 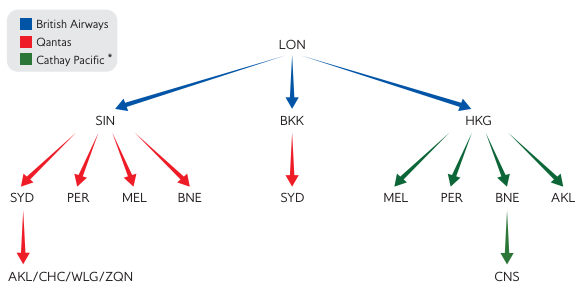 BA will increase Singapore capacity by 12% with the A380 deployment

BA from 28-Oct-2014 will deploy its A380 to Singapore three days a week, replacing existing 747-400 service. Should BA keep this schedule in 2015 (and not go daily with the A380), this will result in a 12% increase in capacity, giving BA its largest capacity between London Heathrow and Singapore in recent times.

BA's London-Singapore flights had been fed by its own Singapore-Sydney service as well as an extensive Qantas network between Australia and Singapore, which has since diminished.

Overall London-Singapore capacity has been down since Qantas moved its Australia-London flights from a Singapore stopover to Dubai, but this is difficult to judge since much of the previous capacity was used for continuing service to Australia. Singapore Airlines has grown its London capacity about 24% from early 2012 levels.

BA may see further demand or alternatively the A380 deployment could later be joined by down-gauging the 777-300ER service. 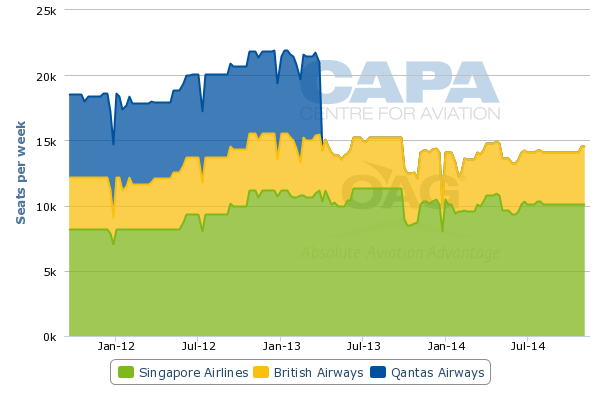 The changes will see BA's first class and business class exposure drop while premium economy will be about steady, and economy will increase.

BA returns Hong Kong to 2009 capacity levels with the A380

The impact has been a 16% increase in capacity. Hong Kong has experienced similar class changes as Singapore: decreases in premium with growth in premium economy. Unlike London-Singapore, London-Hong Kong has seen a slight decrease in economy capacity. 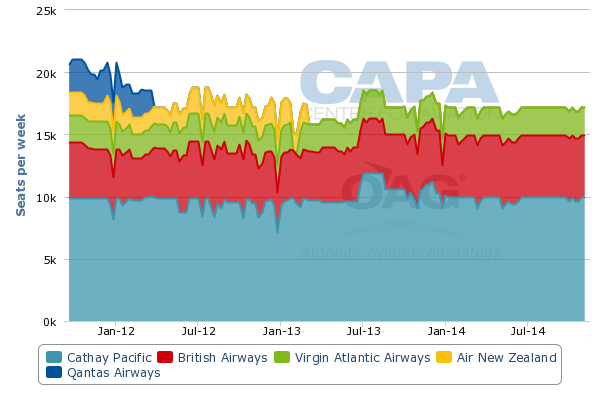 However, BA's capacity growth merely returns it to 2009 levels, and 2014's capacity is still down from pre-2009 levels. BA is able to offer more capacity year-round in 2014 with fewer frequencies (718 in 2014 versus 917 in 2009), enabling growth elsewhere from BA's congested Heathrow hub. The impact of fewer frequencies is minimal; most of the time BA's three flights departed within a narrow time window. 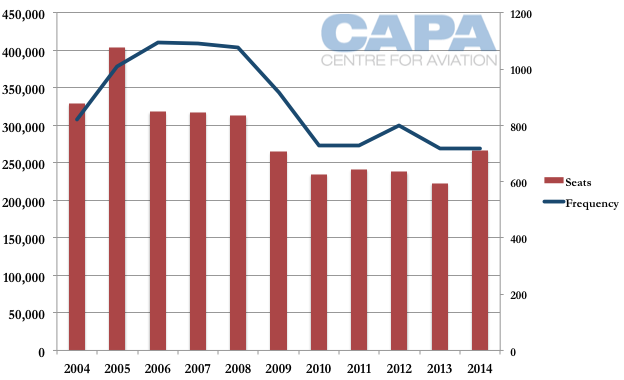 BA's Bangkok operation has been more consistent with a daily 747-400 (low density business configuration) service until late 2013 when BA replaced it with a smaller 777-200, resulting in a 34% decrease in capacity. BA also changed the time of the service. 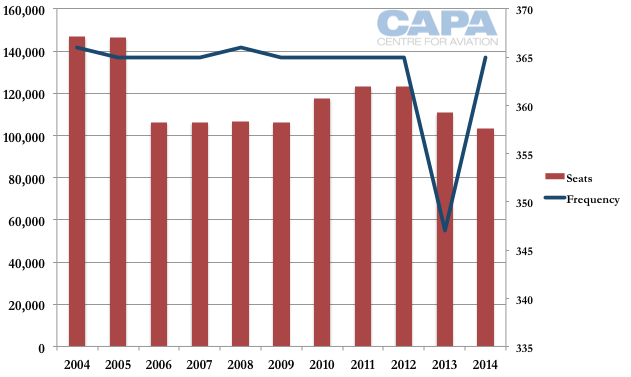 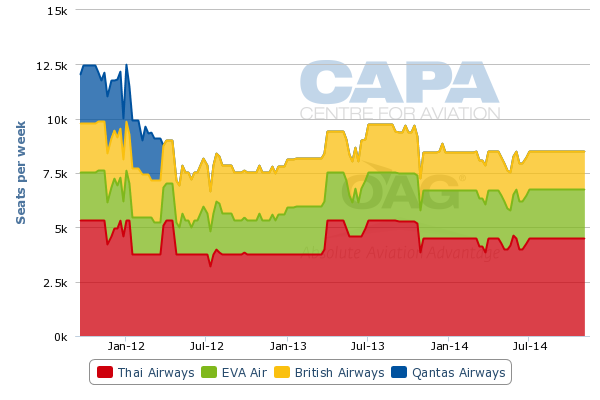 However, Mr Embleton said in Nov-2013 (after the introduction of the 777-200) that BA had yet to "right size" Bangkok, foreshadowing further changes. Bangkok achieved the lowest feed from Qantas of the three JSA cities (Bangkok, Hong Kong and Singapore). Without the JSA Bangkok became too small and leisure-heavy for BA, even when using a configuration with fewer business seats and more economy seats.

Since the change from 747-400 to 777-200, first class has been eliminated, a solid if obvious move on a leisure route where paid bookings will be minimal. Business class share does increase but overall premium share is down while economy cabins are up. More critically, overall BA has reduced daily capacity (337 seats on the 747-400 to 275 on the 777-200).

An Asian network re-shaped by partnerships; Qatar Airways' role is yet to be exposed

The longstanding British Airways-Qantas JSA may have faded relatively amicably, but there were still large network impacts and BA continues to work through them. No longer does there exist an obligation to have perhaps over-capacity in some markets like Bangkok, but this comes with the challenge of finding a right solution.

And nor in this example is BA alone, with Lufthansa also struggling in Asia's leisure markets - although in its case the German flag carrier is talking of a perhaps rather unlikely solution applying a sub-fleet of higher-density A340s.

BA's network is standing on its own, although there are still partners – Qantas in Singapore and Bangkok and Cathay in Hong Kong. Sydney has reportedly seen improvements, but these are not exclusive to the JSA ending.

And as the new oneworld partnership of BA-Qatar Airways is elaborated, there will undoubtedly be more Asia-Pacific changes to come.