Brazil’s Azul and GOL stick to recovery targets for 2020

Two of Brazil’s major airlines continue to add back capacity at a faster pace than other operators around the world as demand within the country continues to recover.

But those airlines are also working to ensure that their fleets are sized to match demand levels that are much lower than in 2019, which means lease returns, and working with lessors to obtain financial relief in the short term.

Brazil’s third largest domestic airline Azul has previously stated that by Dec-2020 it would be operating 60% of the capacity it deployed at the same time in 2019, which was up from a previous projection of 40%.

The airline has recently stated that its capacity in Oct-2020 will reach 55% of 2019 levels, and said that strong improvements are occurring in booked average fares and revenue.

Data from CAPA and OAG show that Azul’s seat deployment projections have changed little during the past couple of weeks, which is different from many US airlines that have lowered their capacity expectations for the country’s autumn season. 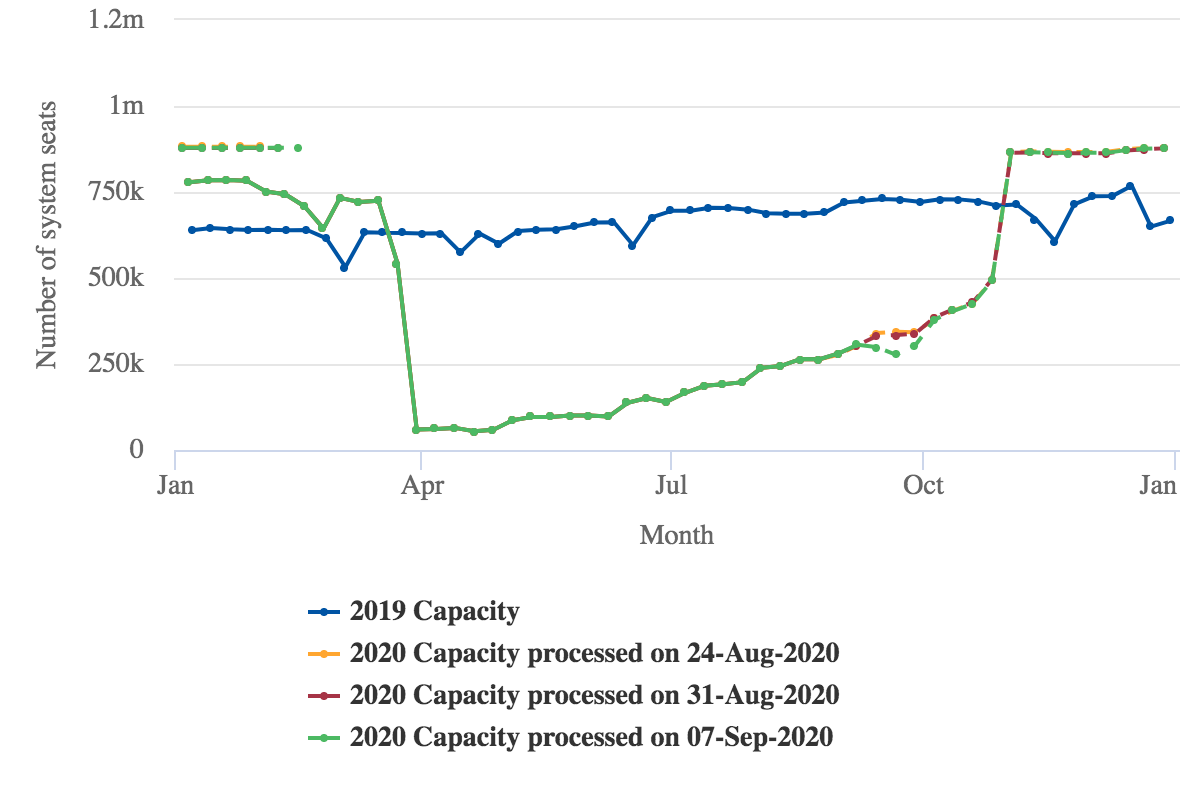 During Aug-2020 Azul’s management explained that average fares had “come up very nicely” during the previous three to four weeks, and demand volumes had remained steady as fares increased. However, the increases remain off a low base.

“We are well on our way to achieving our year-end network and demand recovery targets”, Azul chief revenue officer Abhi Shah recently declared.

Azul CEO John Rodgerson said that the improvement in booked average fares and revenue was giving the airline confidence to continue to increase its capacity sequentially on a monthly basis.

A few weeks ago GOL stated that it was aiming to resume approximately 80% of its pre-crisis network and frequencies by the end of 2020, and it does not seem that those projections have changed.

During Apr-2020 GOL was operating just 50 flights per day. Based on current data from CAPA and OAG, GOL’s seat deployment is projected to rise steadily in 3Q2020, with a more pronounced increase in 4Q2020. 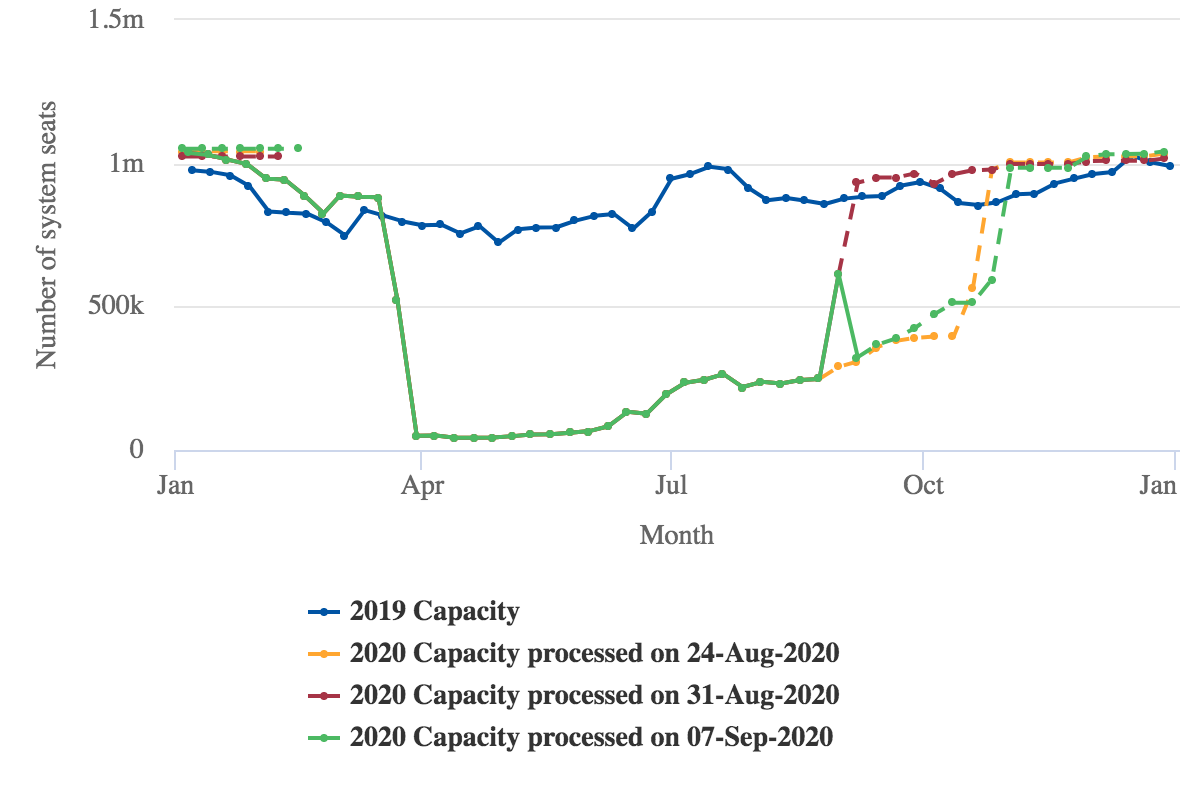 GOL also expects some return of business demand during Oct-2020 as some larger corporations in Brazil resume corporate travel.

Of course, the optimism expressed by Azul and GOL is based largely on sequential trends. On a year-on-year basis, the outlook is more bleak.

For example, on a year-on-year basis, Azul’s traffic was cut by nearly 69% year-on-year, and at the end of Aug-2020 GOL still had 70 aircraft grounded.

The result is that each airline continues working to rightsize its fleet to achieve a rational supply-demand balance. Through the end of Aug-2020, GOL had reduced its fleet by nine leased Boeing 737s, and is on track to return an additional seven aircraft by the end of 2020. It also has the ability to reduce its fleet by another 30 aircraft in the 2020-2021 period if necessary.

GOL has stated that its operating fleet is 100% leased, and the airline has received support from its partners “in the form of deferrals, discounts and variable power-by-the-hour payments on some aircraft”. Those agreements have resulted in monthly lease payments in line with the recovery of demand in 2020-2021, “and won’t impair GOL’s post pandemic cost structure with expensive deferral only agreements”, the airline explained.

Azul has reached an agreement with a sizeable number of lessors to adjust its payment schedules, which will result in a 77% reduction in operating lease payments between April and December of 2020. However, those lower monthly lease rates will be compensated for by slightly higher payments starting in 2023.

CAPA’s feet database shows that as of early Sep-2020, Azul had 91 aircraft in service and 65 inactive, and approximately 96% of its active fleet was leased.

Azul Airlines: percentages of owned vs leased aircraft in service 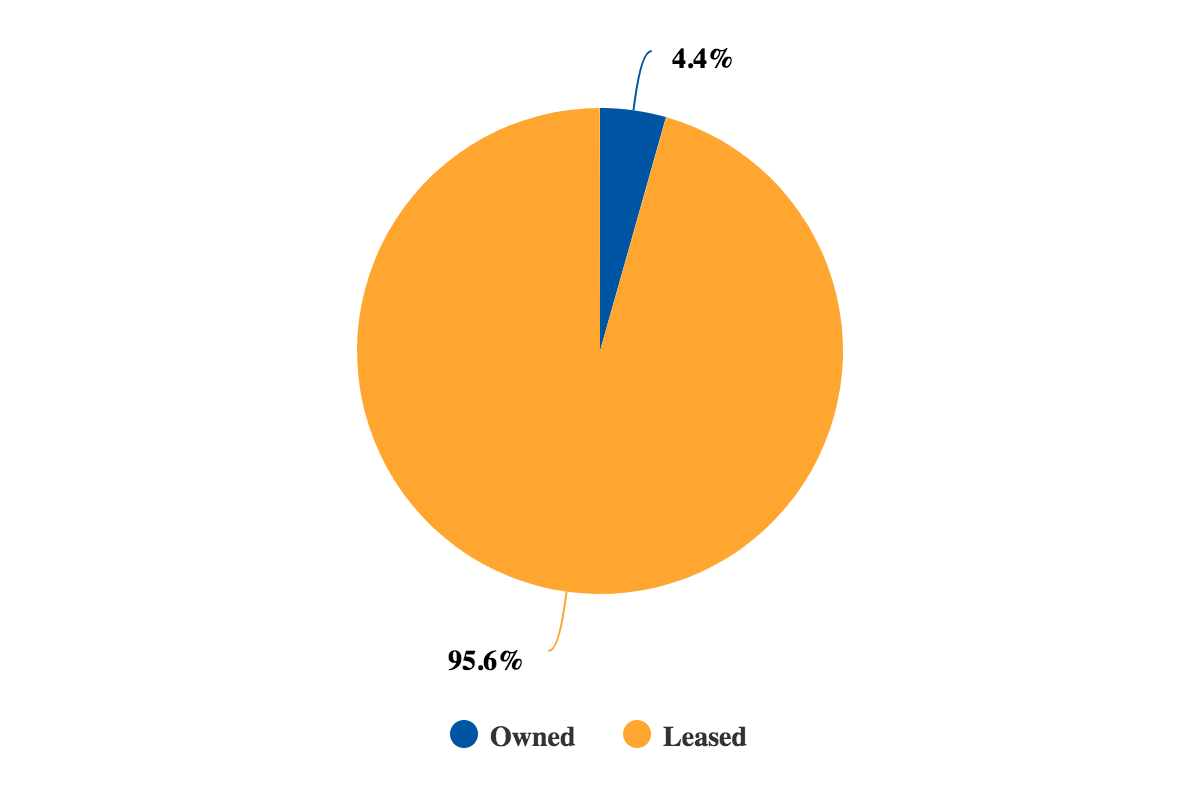 Azul and GOL have, and continue to hold, a more positive view about Brazil’s recovery than some operators elsewhere in the world.

Throughout the pandemic Brazil has been a study in contrasts. Until recently, Brazil was in the unenviable position of having the highest numbers of COVID-19 cases, behind the United States. Now it has dropped to third behind India, although Brazil still has 4.3 million cases of COVID-19.

As the country works to contain the spread of the virus, Azul and GOL remain bullish about the recovery of demand, and are confident in their capacity deployment as the situation develops.