Brazilian airport concessions: Rio and São Paulo to be included

The Brazilian airport concession programme took another unexpected turn when a further tranche – this time of 44 airports in six regional blocks – was reported to have been drafted on the orders of recently elected President Jair Bolsonaro.

Many of the most attractive airports, especially so to foreign operators and investors, appear to have gone already, but in this instance both the Santos Dumont Airport in Rio de Janeiro and Congonhas Airport in São Paulo will also be included.

But events in Belo Horizonte, where a secondary airport may be restored to full functionality, contrary to the understanding of the concessionaire on the primary one, threaten to impact negatively on the current and future tranches.

No sooner has an announcement been made confirming the fourth tranche of Brazilian airport concessions  than the President-elect, Jair Bolsonaro – who takes power on 01-Jan-2019 – is reported to be drafting a project for the concession of six additional regional blocks of airports by 2022, this time encompassing 44 airports. Under a draft schedule plan, three blocks would transfer under concession in 2020.

The low hanging fruit already cherry-picked, except for Santos Dumont and Congonhas

The location of the airports is summarised in the table below, along with their respective combined block values in USD. A similar problem affecting their disposal applies, and indeed it may even be more acute.

The ripe low hanging fruit has already been picked, and the smaller and more provincial an airport is, the less the interest in it from foreign investors is likely to be. Brazil is running out of attractive anchor airports to be the lead attraction in a ‘block’ of airports, none of which otherwise put through as many as one million passengers annually.

However, there is a twist in this particular tale, in that for the first time Rio de Janeiro’s Santos Dumont Airport and São Paulo’s Congonhas Airport are included.

Both have been slated for inclusion in the concessions programme previously, in the third tranche, together with airports in big cities like Fortaleza and Porto Alegre, but Santos Dumont was to have been bundled with a host of relatively underperforming airports (including Belo Horizonte Pampulha, see below).

The economic decline that has blighted Brazil in recent years cast doubt on the deal, and then the decision was taken to exclude Santos Dumont altogether and leave it with the state operator Infraero – apparently on the grounds that without that asset Infraero would have no profitable ones at all.

A similar set of circumstances applies to Congonhas, which was left off the list entirely for the previous round, partly because of “technical issues” and partly, again, because including it would complicate the financial situation of Infraero. There may have been some political shenanigans as well, involving the previous administration.

The end may be in sight for Infraero

But new brushes sweep clean, and Mr Bolsonaro is doing just that.  He seems to have written off Infraero. In a local media interview earlier in Dec-2018 he said he intended to grant the entire network of Brazilian airports to concessionaires within three years (not all of them are owned by Infraero, by any means) and then to “terminate” Infraero.

Both Santos Dumont and Congonhas are regarded as the remaining ‘jewels in the crown’, but after that there simply aren’t any.

(Many people know Santos Dumont even if they don’t know it – in the James Bond film ‘Moonraker’ it is clearly visible from nearby Sugarloaf Mountain and it is one of the most scenically located airports in the world.) 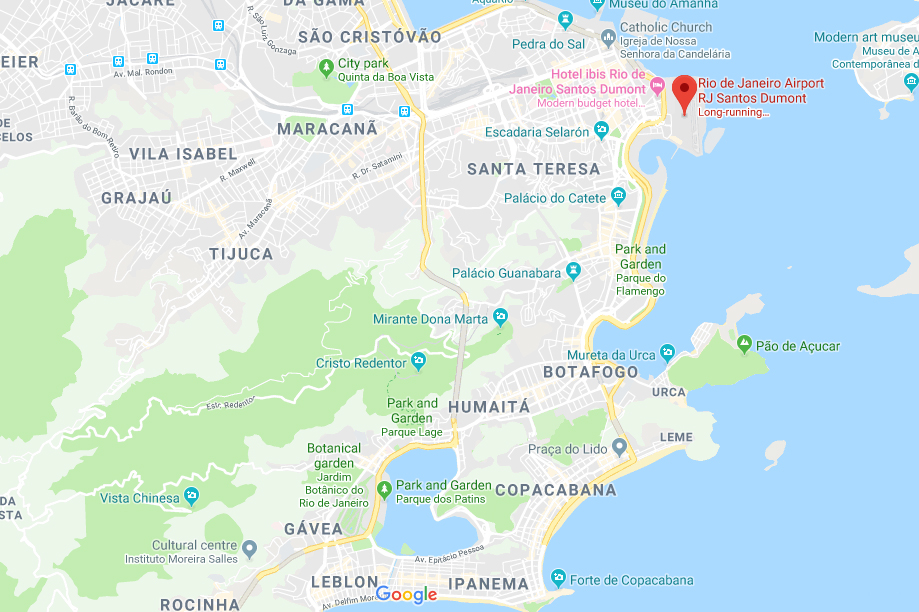 Santos Dumont has over half the passenger traffic of Galeão

With 9.2 million passengers in 2017, Santos Dumont is only just outside the top 15 busiest airports in Latin America, is the seventh busiest in Brazil, and has more than half the passenger traffic of the more distant Galeão airport to the north, which is 20km from downtown.

It is a wholly domestic airport with two short runways of 1260m and 1320m, and with no realistic prospect of extending them out to sea. Almost two thirds of seat capacity is on low cost carriers and that capacity is well apportioned between important carriers such as Gol, LAN, Azul, and Avianca Brazil. 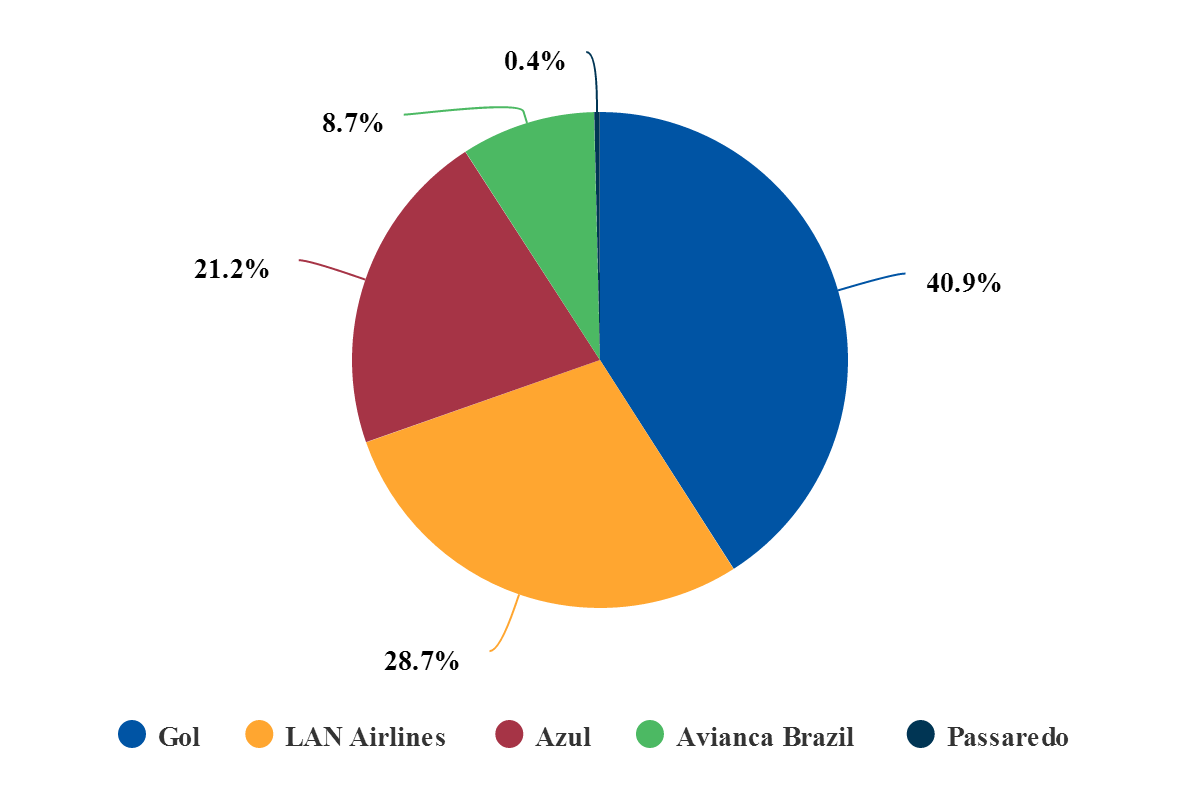 The airport is well used from 0600 to 2300 (outside those hours there is a curfew) with a good balance of departing and arriving flights.

Almost half of the seats are to and from Congonhas – a sort of ‘sister’ airport as it is also São Paulo’s second airport and equally occupies an inner city position, some 8 km south of downtown. Guarulhos (already subject, like Galeão, to an earlier concession procedure), Brazil’s busiest airport and Latin America’s second busiest, is located approximately 15 km to the northwest.

Congonhas is closer to downtown – better for regional business airlines

The combined annual passenger throughput of the two São Paulo airports is more than twice that of Rio de Janeiro's.

Congonhas, also wholly domestic, hosted almost 22 million passengers in 2017 and its growth rate has been higher than Santos Dumont’s, although so far this year (to Nov-2018 inclusive) both airports have experienced a fall in numbers attributed to the economic situation.

Owing to its location, Congonhas is favoured over the larger but more distant Guarulhos Airport for regional business traffic. The distribution of seats mirrors that of Santos Dumont except that Gol has a larger share, at almost 50%, while LAN’s is more than 50%.

Location of Congonhas Airport and Guarulhos with respect to downtown area 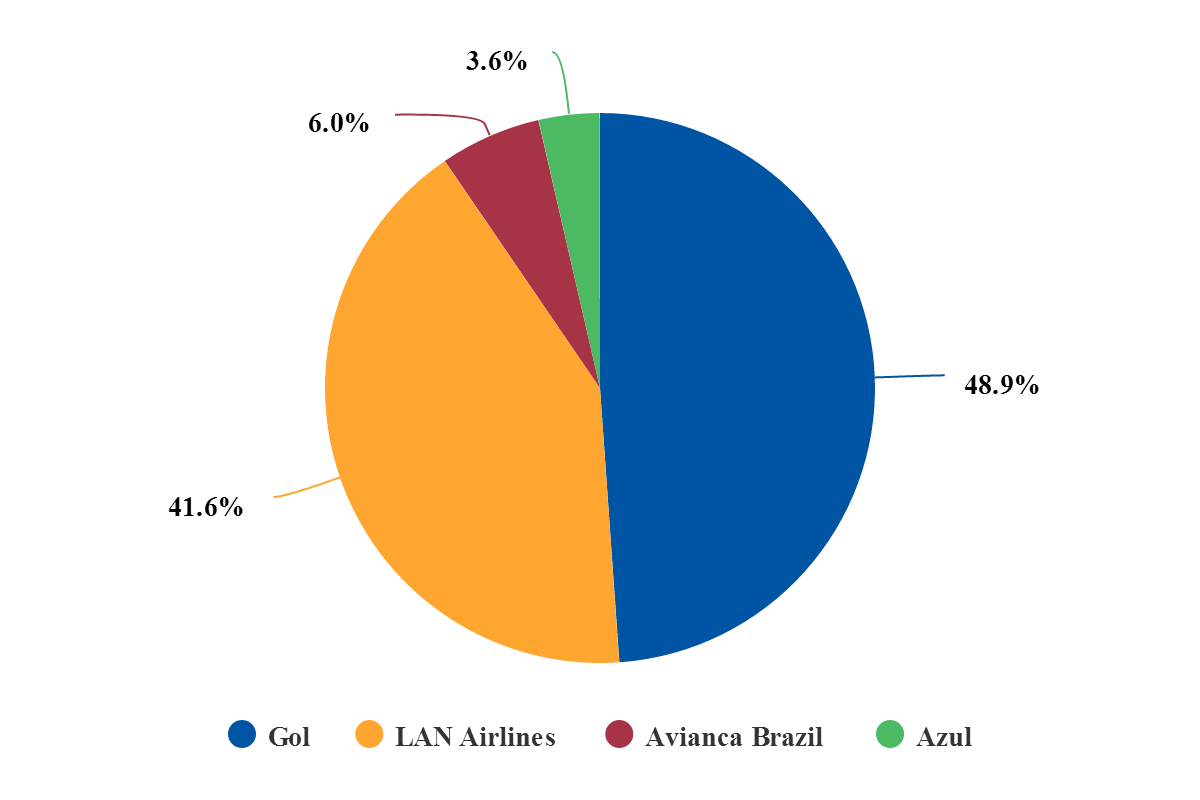 Again, LCCs predominate (52.5% capacity share), but what Congonhas has that Santos Dumont does not have to the same degree is a significant presence by an airline alliance (oneworld): through LAN, as part of LATAM (41.6%).

The problem with Congonhas is the heavy urban density surrounding the airport, which is on a par with that at Lisbon’s Humberto Delgado and Chicago’s Midway airports.

As a result, Congonhas is restricted to 30 operations per hour with narrowbody aircraft and cannot serve international destinations. It also has a 23:00 – 06:00 curfew. 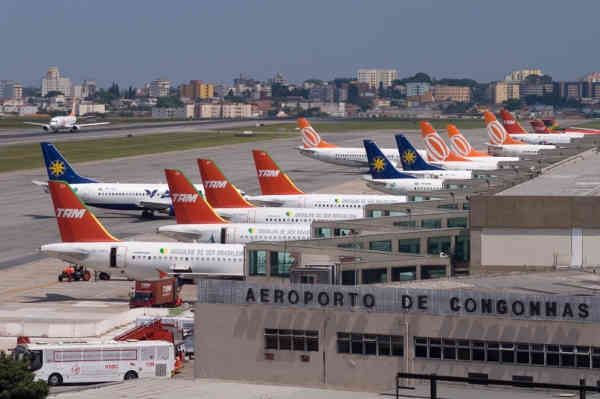 In 2007 Congonhas was the location of what remains the worst air disaster in the history of Brazilian aviation, when a new TAM A320 skidded off the runway and crashed into a cargo building across the road from the airport, killing 199 people in all.

The inclusion of these airports will attract foreign investors, but the news of yet more problems arising from a previous concession will not.

BH Airport, the concessionaire at the Belo Horizonte Tancredo Neves Airport, has advised that consortium member Flughafen Zürich will surrender its share in that airport if the city’s Pampulha Airport – administered by Infraero – is reopened unrestrictedly, since the current passenger volume makes it economically unviable for Belo Horizonte to have two airports.

Flughafen Zürich is also the (sole) concessionaire at Florianópolis Airport and it has been working with IG4 Capital to take control of the indebted Aeroportos Brasil Viracopos (ABV), which operates Campinas Viracopos Airport.