Both JetBlue and Delta Air Lines are downplaying their intensifying competition in Boston as both airlines march towards their respective goals of 200 daily departures from the airport and Delta transitions Boston into a hub airport.

JetBlue shows no signs of retrenching in Boston, having made a significant investment in building up the airport as its second largest focus city, and using Logan as its base for the launch of trans Atlantic operations in 2021.

The commitments by Delta and JetBlue to Boston are good news for the airport, which will no doubt continue to chart solid growth as the competition shakes out.

JetBlue seizes on an opportunity to become Boston's largest airline

JetBlue began serving Boston in 2004, building the market up into a focus city. The airline is now Boston Logan’s largest airline by weekly departing frequencies. 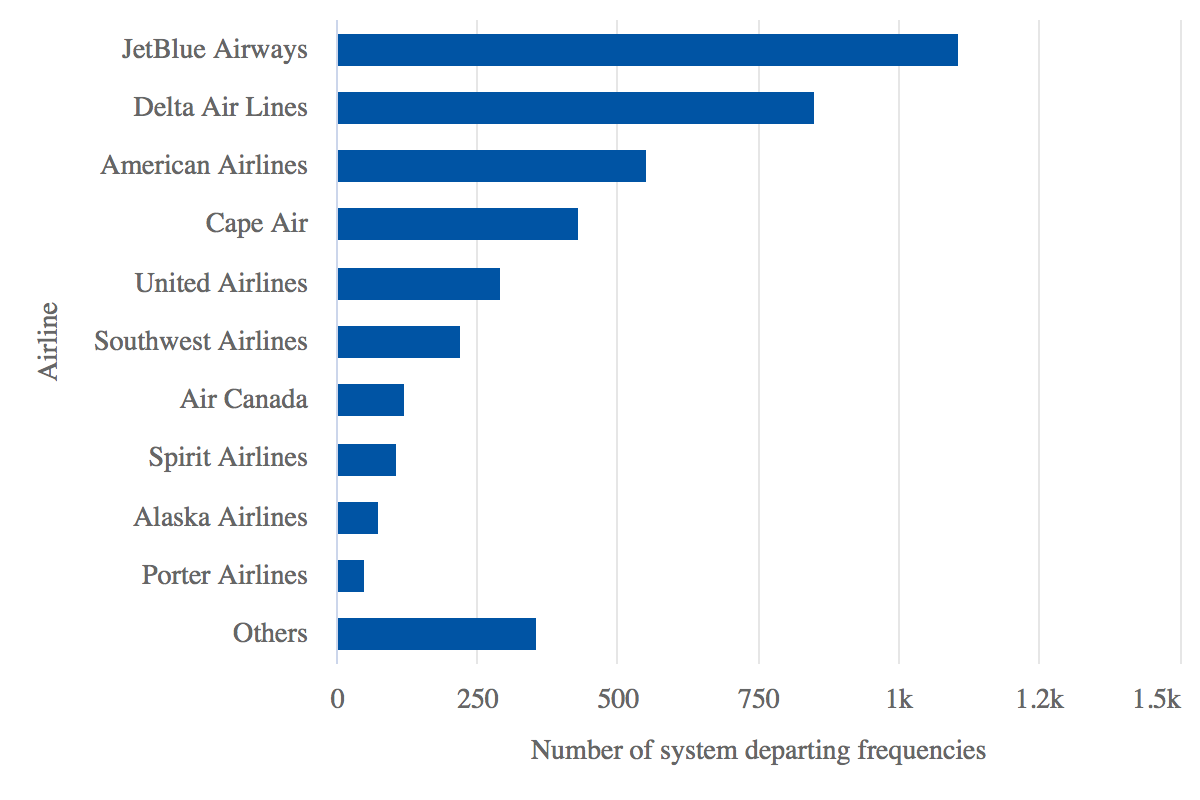 Boston was a prime opportunity for JetBlue.

As American, which was previously Logan’s largest airline, opted to pull back in some of its secondary markets to focus on its large hubs, Boston was one the larger US markets without an anchor airline.

JetBlue has often cited Boston as one of the top performers in its system, and over the past couple of years the airline has deployed its Mint premium product on selected routes from the airport to increase its relevance among corporate travellers in the market. JetBlue's Mint routes from Boston include Seattle, Los Angeles, San Diego, San Francisco, Las Vegas and the Caribbean destinations of Aruba, Grenada, Barbados and St Maarten.

JetBlue’s management has previously determined that Mint has been a big contributor in its ability to secure corporate contracts in Boston. The airline has stated that it has contracts with every company of reasonable size in the Boston market, except for one.

During the past couple of years Delta has been increasingly building Boston up, first identifying the market as a focus city, and then declaring the airport as a hub earlier in 2019.

Delta executives recently explained: “To the extent that we’re beginning to connect…more and more traffic over Boston, we would consider it a hub", said CEO Ed Bastian. He remarked that during 2019 Delta is connecting approximately 1,000 passengers per day from the US to Europe over Boston.

Delta executives also stated that Boston led the company’s system revenue performance in 2Q2019, with growth of 25% year-on-year and a 10% improvement in unit revenues.

Both JetBlue and Delta have stated their ultimate goals of reaching 200 daily departure in Boston.

Delta aims to reach that threshold during the next 18 to 24 months, and its management has declared that level of service would create a very profitable and sustainable franchise for the airline in Boston.

JetBlue is not afraid of increasing competition from Delta in Boston

All during Delta’s expansion in Boston, JetBlue has been fielding questions about the increasing competition, and has publicly downplayed the changing dynamics. Instead, JetBlue has continually touted its strength in Boston, and is sticking to that message – now that Delta has identified Logan as a hub.

“We are very profitable in Boston, solid. We are committed to winning in Boston. We've built the network in Boston based on carrying customers where they want to go. We are focused on local customers where we see a very clear first choice preference for JetBlue”, JetBlue president Joanna Geraghty recently told analysts and investors.

Data from CAPA and OAG show that JetBlue’s seat shares on those routes are the strongest to Washington National, where it has a 51% share compared with American’s 49%.

Ms Geraghty did acknowledge some puts and takes with respect to competitive capacity in Boston, with some competitors adding capacity and other airlines cutting their supply in the market. She highlighted that net capacity will accelerate in Boston during 4Q2019, but “it is still within the range of what we have historically seen in Boston so we are quite comfortable with it”.

Data from CAPA and OAG show that Boston’s system ASKs are elevated somewhat during mid 2019 and that capacity growth has been steady at Logan since 2016. 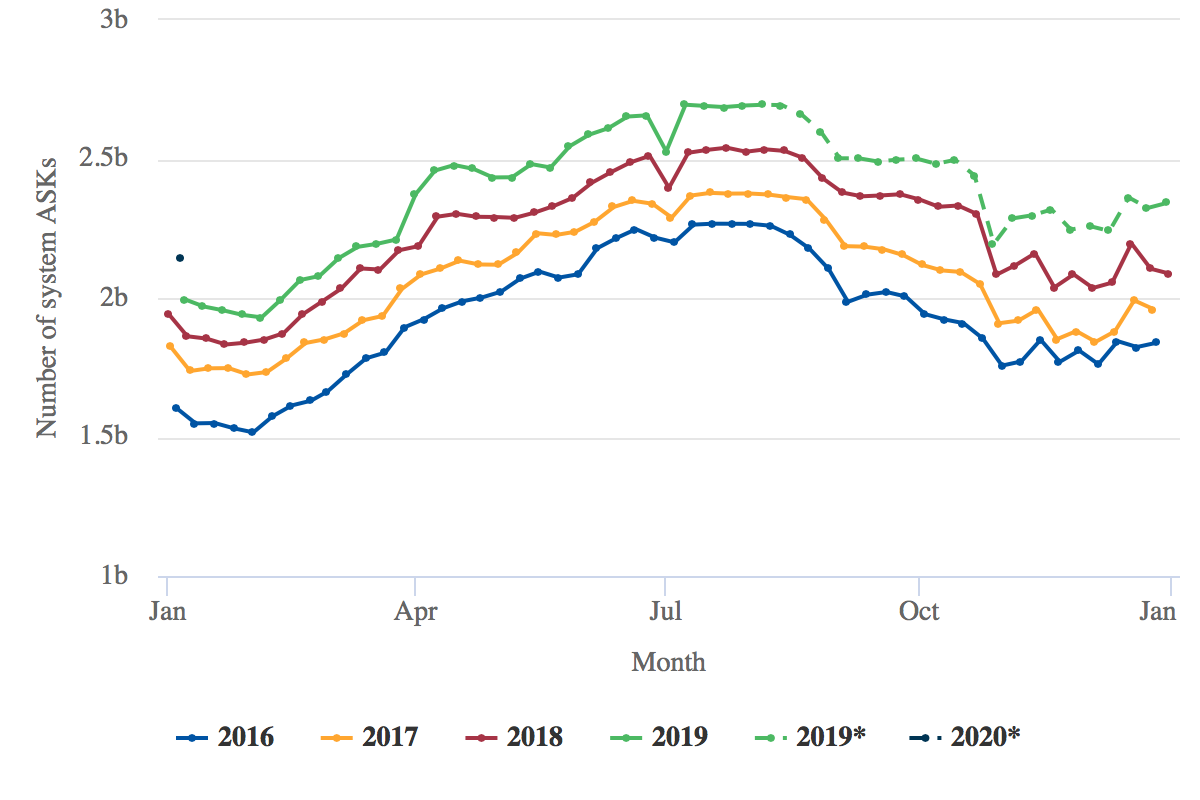 * These values are at least partly predictive up to 6 months from 22-Jul-2019 and may be subject to change.

It remains to be seen how the new competitive dynamics in Boston will play out. But obviously Boston is welcoming new routes and additional frequencies to current markets and the airport’s passenger growth continues to climb. 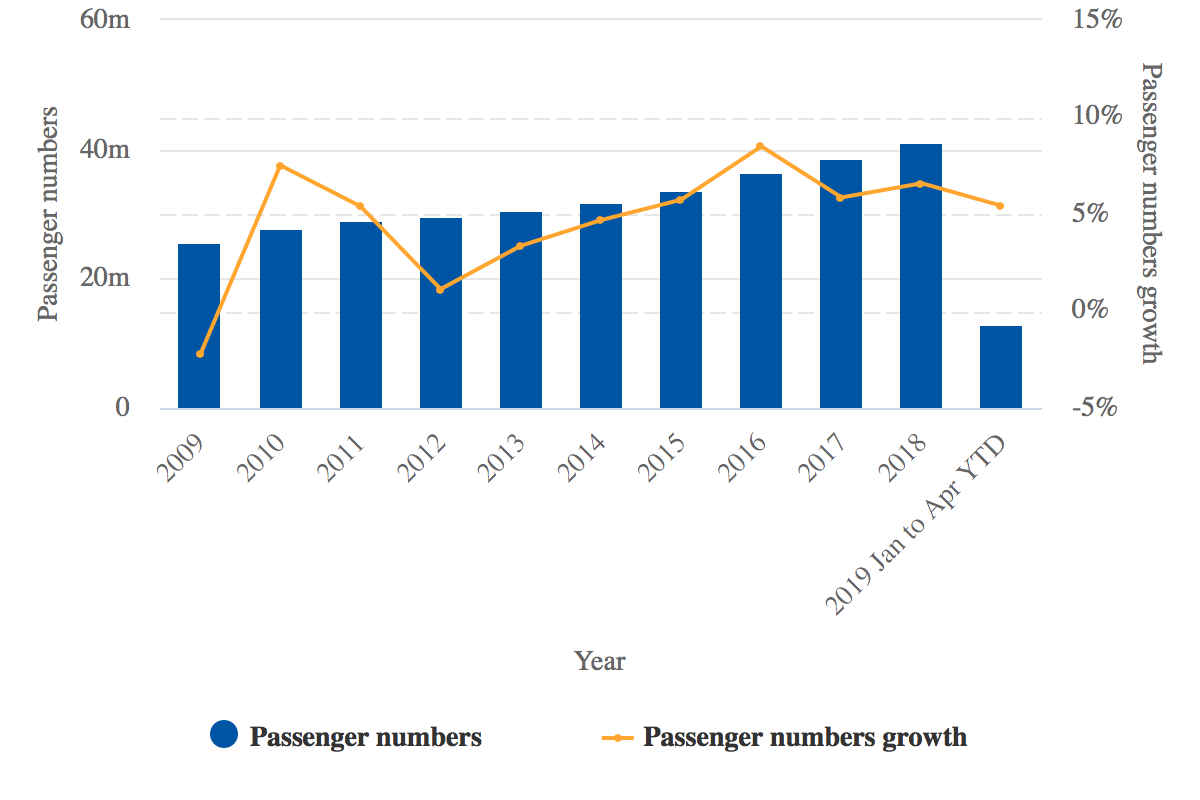 Just as JetBlue saw an opportunity to build Boston up, Delta now sees an opportunity to leverage its growing connections from Logan, and believes that its connecting passengers at the airport have reached a level that allows for the declaration of Boston as a hub.

JetBlue has made, and continues to make, sizeable investments in Boston and is showing no signs of ceding its leading position in the market. Those elements are setting the stage for the interesting dynamics that are developing in the market to continue.